Readers may recall that an item about Covid vaccine passports in the April 20th edition of BBC Two’s ‘Newsnight’ programme included the following claim from presenter Emily Maitlis:

Maitlis: “But in Israel, where the Palestinian population has not been inoculated at anywhere near the rate of the Israeli population, there is plenty of concern about the passport’s ability to widen the gulf.”

“Maitlis did not clarify what she meant by “the Palestinian population” but if she was referring to Israeli Arabs – as her use of the words “in Israel” would suggest – the claim that that sector “has not been inoculated at anywhere near the rate of the Israeli population” is inaccurate and misleading. All sectors of the Israeli population over the age of 16 have been offered the vaccine equally and while uptake was initially lower in some sectors – including among Israeli Arabs – the rates have recently improved.

If instead by “the Palestinian population” Maitlis meant people living in Palestinian Authority controlled areas and the Gaza Strip, then clearly her use of the term “in Israel” is equally inaccurate and misleading. She continued:

Maitlis: “[…] Israel’s population is a boutique nine million. Nevertheless, their roll-out of the vaccine has been impressive. Nearly 60% have been fully vaccinated already. This weekend Israelis unmasked for the first time, stepping out on the streets without face coverings: a response to a successful mission to get the virus under control. The country has also re-opened all schools and universities. But the roll-out to Palestinian citizens has been much slower at 0.5% and that’s led to criticism that a passport scheme will widen a political divide already hurting many in that country.”

Mr Stephen Franklin submitted a complaint to the BBC regarding the inaccuracy of Maitlis’ claims. Over a month after the broadcast – on May 24th – he received a response rejecting his complaint and stating that the BBC did not “consider this report to stray from accuracy”.

Mr Franklin submitted a second (Stage 1b) complaint to which he finally received a reply on August 16th. In that reply the BBC acknowledged that:

“You are right to say that we got our sums wrong – unfortunately we conflated the vaccination rate for Israeli Arabs (where there was, as you say, some reluctance to have the jab) and the very low rate for Palestinians living in the West Bank and Gaza where Israel was not vaccinating the population. […] We also agree we should have been clear about the issue of vaccine hesitancy.”

The BBC has now published the following on its ‘Corrections and Clarifications’ webpage: 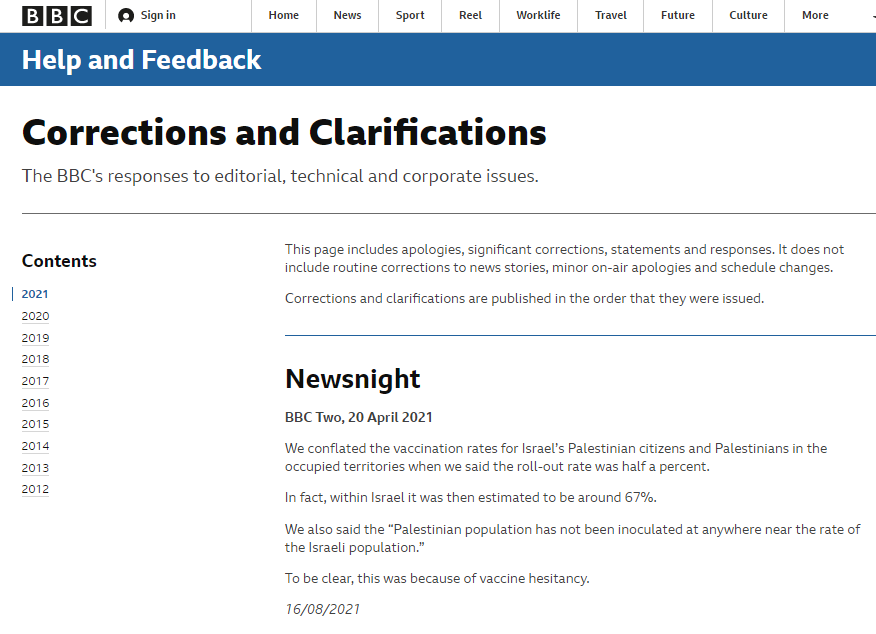 One may well wonder how effective that correction will be in ensuring that BBC Two viewers who were told that the vaccination rate among Israeli Arabs was only 0.5% will be relieved of the grossly inaccurate impression they were given almost four months ago.

Perhaps if the BBC discontinued its politically motivated practice of labelling Israeli Arabs as Palestinians despite the fact that most of them do not identify as such, that ‘conflation’ could have been avoided in the first place.