Readers may recall that some two and a half years ago the BBC got itself into hot water by promoting Assad regime propaganda on its English language website. Two days after the appearance of an article claiming that “Israeli strikes on Syria ‘co-ordinated with terrorists'” the corporation responded to considerable public outcry by amending the headline.

Apparently though, lessons have not been fully learned from that incident.

As has previously been noted here, on August 21st a report appearing on the BBC News website’s Middle East page amplified a claim promoted by Syrian state TV according to which five men killed in an Israeli strike following a missile attack on northern Israel were “civilians”.

BBC Arabic however went even further. In a report dating from August 20th relating to Israeli airstrikes on regime targets in Syria which took place in response the same day’s missile attack on Israel, readers were provided with unadulterated Syrian state news agency propaganda.

“A statement by the agency SANA that the Israeli attacks aimed at “supporting armed terrorist organizations and raise the morale collapsed,” a reference to armed groups in Syria, which is fighting to overthrow the Syrian regime.”

There is of course nothing new about this particular genre of Syrian regime propaganda and Assad himself recently promoted it in an interview with Hizballah TV.

“In an interview with Hezbollah-affiliated Al Manar television on Monday, Assad said that Syria would not directly strike back at Israel for the attacks, but would hit Israel by fighting with rebels opposing his rule, whom he claimed were the “servants of Israel.”

“The real tools that Israel is using, which are more important than the recent attacks, they are the terrorists in Syria,” Assad said.

“If we want to deal with Israel, we must first deal with its proxies inside Syria,” he added.”

In the Middle East there are already countless media outlets reporting according to a particular political or ideological agenda. It is supposed to be the job of the BBC – including BBC Arabic and other foreign language services – to distinguish itself from regime-run media by providing audiences with accurate and impartial reporting which will enable them to understand what is fact and what is fiction. Uncritical and unchallenged amplification of obviously delusional Syrian regime propaganda is clearly not conducive to achieving that goal. 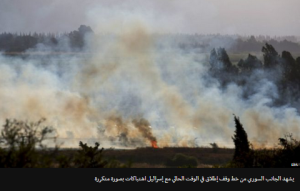 However, the exact same image was used in another BBC article produced on the same day and there it was described as showing northern Israel: “Rockets fired into Israel caused brushfires after hitting open areas near Galilee” [sic]. 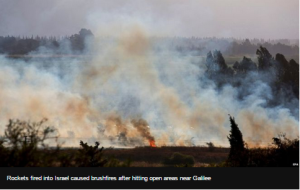 One of those captions is obviously inaccurate and misleading.

0 replies on “Why is BBC Arabic amplifying Syrian regime propaganda?”