In 2014, the PLO issued a memo to journalists “advising” them not to use the term “Temple Mount” when referring to the area within Jerusalem’s Old City which houses Judaism’s holiest site and the third holiest site in Islam. Instead, they instructed reporters to refer to the site as the “Al-Aqsa Mosque Compound”, and even bizarrely suggested that using the term “Temple Mount” is a violation of international law.

Though many journalists reporting from the area now note both names (Temple Mount and Al-Aqsa Mosque Compound), Financial Times’ Jerusalem correspondent did the PLO one better. In a 2000 word article about Jerusalem’s Old City (Jerusalem: City of Ruins, Oct. 1), he not only referred to the compound as Haram al-Sharif (the Arabic term), but didn’t once note that the Temple Mount (Har Habayit in Hebrew) is located in the holy city.

The Temple Mount is the site where both Jewish Temples stood, and represents nothing less than the epicenter of the Jewish faith.

As CAMERA noted in a backgrounder last year, “Jewish reverence for the Temple Mount long predates the building of the Dome of the Rock and Al Aqsa Mosque in the 7th century CE, and even predates the construction of the first Jewish Temple in 954 BCE”.

In addition to the omission in the text, graphics and photos used by FT editors also erase the existence of Judaism’s holiest site.

Note that the caption in this photo fails to mention the Temple Mount. 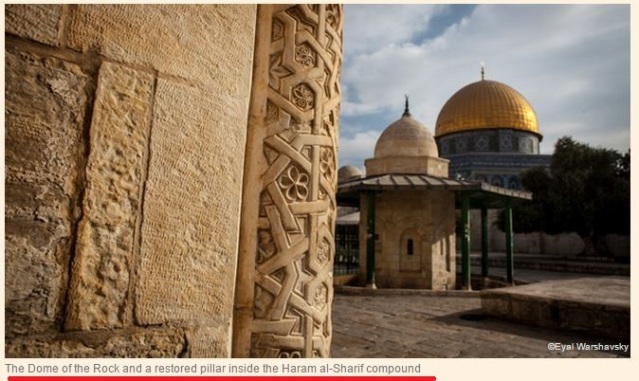 Now, take a look at this FT graphic map of the area which similarly omits the Temple Mount. 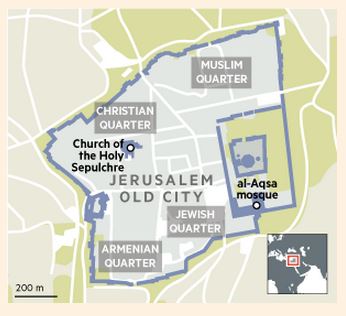 The only passage which even alludes to Jewish history in Jerusalem is in a paragraph which notes that “archaeologists digging in and around the Old City…often find..signs of an ancient Jewish presence…including ruins from the Temple period.”

However, even that passage is “balanced” by citing Palestinian claims that such Israeli archeology is used as a “political tool”.

Of course, denying the Jewish connection to Jerusalem is par for the course for the Palestinians. However, professional journalists who omit such an important component of the Jews’ connection to the holy city are not only commiting a serious distortion of history, but are arguably engaging in a breach of the accuracy clause of the Editors’ Code.