“Tensions between Israelis and Palestinians have escalated since last month, fuelled by clashes at a flashpoint holy site in Jerusalem, in the West Bank, and across the Gaza border, as well as the wave of stabbings.”

Audiences have also seen the statement below which is part of an insert appearing in several reports.

“What is happening between Israelis and Palestinians?

There has been a spate of stabbings of Israelis by Palestinians since early October, and one apparent revenge stabbing by an Israeli. The attacks, in which some Israelis have died, have struck in Jerusalem and elsewhere, and in the occupied West Bank. Israel has tightened security and clashed with rioting Palestinians, leading to deaths on the Palestinian side. The violence has also spread to the border with Gaza.”

As we see, a passive voice is used when informing audiences where “the attacks” (rather than the terrorists) “have struck” and the geographical locations chosen for naming – Jerusalem and “the occupied West Bank” – are interesting considering that the BBC has covered more of the attacks which have taken place “elsewhere” (such as Petah Tikva, Kiryat Gat, Afula, Tel Aviv, Dimona, Gan Shmuel and Ra’anana) than those occurring in Judea & Samaria.

Notably too, audiences are told that “the violence” has “spread” – apparently independently of any outside factor – “to the border with Gaza”.

Of course terror attacks are not hail storms that ‘strike’ in random locations and violent riots are not swarms of locusts that “spread” all by themselves. Each one of the attacks was planned by at least one person to take place at a particular location and each incident of violent rioting involves countless people making the decision to take part.

The first incident of violence on the border between Israel and the Gaza Strip took place on October 9th when some 200 Gazans, said by Arab media outlets to be affiliated with Hamas and the Palestinian Islamic Jihad, began rioting near Nahal Oz. Not unrelatedly, Hamas’ Ismail Haniyeh delivered an inflammatory sermon on that same day.

““We are calling for the strengthening and increasing of the intifada… It is the only path that will lead to liberation,” Ismail Haniyeh said during a sermon for weekly Muslim prayers at a mosque in Gaza City.

“Gaza will fulfill its role in the Jerusalem intifada and it is more than ready for confrontation,” he added.”

That rioting was described as follows in a BBC report from October 9th titled “Israeli-Palestinian violence spreads over Gaza border“.

“Fresh violence between Palestinians and Israelis has seen six Palestinians shot dead in Gaza, reports say, and a fresh spate of stabbings.

Israel said its troops fired over the Gaza border after coming under attack. […]

According to Palestinian medical sources, the six Palestinians were shot dead and many others wounded in two separate incidents in Gaza on Friday when Israeli troops opened fire.

The Israeli military said more than 1,000 rioters had massed at the border fence, throwing a grenade and rocks, and rolling burning tyres at Israeli forces.

After firing warning shots, troops fired towards the “main instigators” to disperse the riot, a military statement said.” 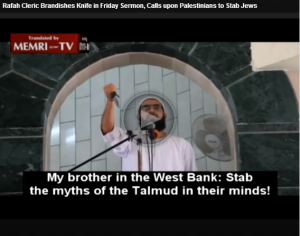 There was no reporting in that article on Haniyeh’s sermon or on similar incitement from Hamas MP and Spokesman Mushir Al-Masri, a Palestinian cleric in Gaza and Sheikh Muhammad Sallah heard by Gazans on the same day.

Haniyeh’s sermon did get a very brief reference in an article published on October 10th under the title “Israeli-Palestinian violence: Gaza rocket lands in Israel”. There, audiences discovered that Yolande Knell considers herself more of an authority on the topic of violent uprisings than Ismail Haniyeh.

“Earlier, six Palestinians were shot dead near the border fence with Gaza. […]

Ismail Haniyeh, the leader of Hamas which runs Gaza, said a new intifada – or uprising – was under way, although the BBC’s Yolande Knell in Jerusalem says the scale of violence does not yet amount to that.”

On October 10th residents of the Gaza Strip instigated more violence along the border and even breached the fence.

“Some 70 Palestinians successfully infiltrated into Israel through the border fence in the area of the Eshkol Regional Council on Saturday night.

IDF troops intercepted the Gazans and turned most of them back. About five tried to flee and were shot at and arrested, Israel Radio said.

Earlier, two Palestinian teenagers were killed by Israeli forces in clashes in the Khan Younis area of the Israel-Gaza border, Palestinian media reported.”

That event was not included in the BBC News report published the following day, although audiences were again told that:

“The violence has spurred talk from Hamas, which dominates Gaza, of a new Palestinian intifada, or uprising.

But the clashes have not yet reached the scale of previous intifadas, with no clear mass movement or leadership so far emerging.”

On October 11th shots were fired from the Gaza Strip at an Israeli civilian vehicle in the Kissufim area and later the same day two separate incidents of missile fire from the Gaza Strip took place with the first falling short and the second hitting the Eshkol area. None of those incidents were reported by the BBC.

On October 12th Gazans once again breached the border fence.

“At least six Gazans were reported injured during renewed clashes between Israeli soldiers and protesters Monday evening along the Israel-Gaza border, after several dozen Palestinians crossed the border fence into Israel, the second such incident in recent days.

Israel Defense Forces soldiers fired at the group of some 20 protesters in an effort to push the Palestinians back toward the Hamas-controlled territory, the Walla news site reported.

The protesters sneaked into Israel adjacent to the al-Bureij refugee camp and emerged in the Eshkol Regional Council, in the center of the Strip, before the IDF arrived at the scene. […]

Earlier on Monday, the Hamas leaders of the Strip denied reports that they had issued a warning to Gaza residents banning them from approaching the border fence with Israel.” [emphasis added]

The only reference to incidents on the Gaza border in the BBC News report from that day reads as follows:

“At the weekend several Palestinians were killed in clashes with Israeli troops and by an Israeli air strike on a militant site in Gaza in response to rocket fire on Israel.”

October 13th saw violent rioting near the Erez Crossing, which had to be temporarily closed as a result.

“At least seven Palestinians were injured when the protesters approached the border fence, drawing tear gas and rubber bullet fire from IDF troops patrolling the fence.”

There was no mention of that incident or the later gunfire at an Israeli army vehicle in the BBC News website’s main report for that day. On October 14th rioting was again seen in the Bureij area but the only reference to that came in the form of the laconic statement “Clashes were also reported along the Israeli border with Gaza” which appeared in an article originally published on that day.

So, despite repeatedly telling readers that “violence has also spread to the border with Gaza”, the BBC News website has actually ignored most of the violent incidents in that area – including breaches of the border fence – and has certainly not provided audiences with any information concerning the very relevant background topic of incitement from officials and clerics in the Gaza Strip or the failure of Hamas to exercise its ability to prevent violent rioters from reaching the border area and breaching the fence.