Using the dramatic heading “The night hope died”, the BBC News website published an article by Middle East editor Jeremy Bowen in the ‘Features’ section of its Middle East page on November 4th which invited audiences to ponder the question “Did Rabin assassination kill the best chance for peace?“. 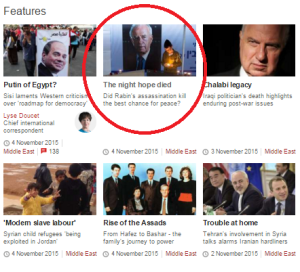 As readers of the article would soon see, the question posed in that headline is a rhetorical one: Bowen’s take away messaging leaves audiences in no doubt as to which side in the Arab-Israeli conflict killed off “hope” and “peace”. But in order to deliver that take-away messaging, Bowen has to make some rather important components of the story disappear from view.

Bowen’s own approach to the topic is evident in his opening statements:

“My view is that Rabin’s assassination, 20 years ago today, was one of the most successful political killings of the 20th Century; his assassin, Yigal Amir, wanted to destroy the Israel-Palestinian Oslo peace accords by shooting dead the only Israeli leader who had a chance of making it work.”

Later on he adds:

“Of course it is impossible to map out with certainty an alternative future for Israelis and Palestinians had Rabin lived.

The Oslo peace process had a slow death, but I believe it contracted its fatal illness on 4 November 1995 when Yigal Amir shot Yitzhak Rabin in the back.”

“There was a chance of peace with the Palestinians when Rabin was alive. He was forging an unlikely understanding with Yasser Arafat, his detested old enemy. […]

But between them, Rabin and Arafat might have seized the chance to make history.”

Addressing the same topic at the Times of Israel, David Horovitz writes:

“…the sorry fact is that Yasser Arafat — whom Clinton said so trusted Rabin, and was even “a little intimidated by him” — wasn’t sufficiently trusting, or intimidated, or committed to peacemaking, as to put a halt to Palestinian terrorism even as they were all shaking hands on the various interim deals. As Dalia Rabin noted starkly in my recent interview with her, “The waves of terror hit the peace process, undoubtedly… (and) I have the feeling that (Rabin) wouldn’t have let it continue. There would have been a stage where he would have decided: We’re in a phased process. Let’s evaluate what we have achieved and what the price has been. He wouldn’t have stopped Oslo, but he would have done what Oslo enabled him to do: to look at it as a process and assess whether it was working.”

Eitan Haber, Rabin’s closest aide whom I interviewed two years ago, also sounded rather less than convinced, giving me a series of somewhat ambiguous answers, including this bleak sentence: “I didn’t believe for a second that Arafat was a partner and I’m not at all sure that Rabin believed he was.””

A caption to a photograph illustrating Bowen’s article tells BBC audiences that “Israel shifted to the right after Rabin, with the election of Benjamin Netanyahu” but the article fails to clarify that at the election after that, Israel elected the Labour party’s Ehud Barak as prime minister after he ran on a manifesto which included withdrawal of Israeli forces from Lebanon and negotiations with the Palestinians or that a decade after Rabin’s death, Israel under Ariel Sharon disengaged from the Gaza Strip.

Regarding the 1996 general election, Bowen speculates: 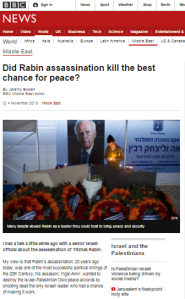 “But when Israel woke, the final votes had given victory to Mr Netanyahu and the right. Yitzhak Rabin would most likely have beaten Mr Netanyahu. The future would have been different.”

David Horovitz points out that:

“…Netanyahu was carried to victory, by a nailbiting 29,457 votes, by those very same waves of terrorism — specifically four suicide bombings in February and March 1996 that persuaded a narrow majority of Israelis, however much they mourned for Rabin and for a country that could produce his killer, that the Oslo path, the Arafat path, was a bloody disaster.”

However, the obviously very relevant topic of Palestinian terrorism – which killed more Israelis after the Oslo Accords were signed than in the years prior to the agreement – only gets a walk-on part in Bowen’s overall portrayal.

“Among the Palestinians, militants in Hamas had already started a suicide bomb campaign. They would have nothing to do with Oslo, saying it was surrender and that there could be no territorial compromise with an Israeli state they believed should not exist. […]

Shimon Peres was sworn in as prime minister after the assassination. Instead of calling a snap election to capitalise on a surge in the polls he decided to see out the government’s term. A succession of blunders followed, and so did an intensification of the Hamas suicide bombings.”

Hamas was not of course the only terrorist organization carrying out terror attacks during that period but Bowen erases the acts of terror perpetrated by other groups and – more crucially – those carried out by terrorists affiliated with Arafat’s Fatah party.  Thus he avoids the issue of Arafat’s failure to tackle terrorism from within his own ranks as well as by other groups and –strikingly – entirely erases the Palestinian Authority initiated second Intifada from his account of how ‘peace died’.

“Rabin himself had not stated publicly that he supported the idea of a Palestinian state, though his closest aides said after his death that he knew it would be part of a final settlement.”

Over at the Tablet, Yair Rosenberg reminds us that Rabin’s vision – as presented to the Knesset a month before his death – was distinctly at odds with Bowen’s speculations.

Bowen’s take-away message to BBC audiences is abundantly clear: peace and hope died together with Rabin because the Israeli right killed both. In order to get that political message across, Bowen has to erase from view the agreements signed between Israel and the PLO after November 1995, the second Intifada, the Gaza disengagement and the peace offers made by Barak in 2000 and Olmert in 2008.

Predictably, Bowen’s distorted presentation of this topic patronizingly affords no agency or responsibility to the Palestinian side whilst firmly placing the onus of blame for the failure of negotiations to deliver at one door only.

Readers familiar with the identical messaging appearing in day-to-day BBC coverage of the Arab-Israeli conflict in general and the peace process in particular will at least have gained some insight into that messaging’s roots in this article.