As readers already know, the BBC’s coverage of the current wave of terror attacks against Israelis has regularly included ‘contextualisation’ of the events in a style shown in the example below:

“The surge in violence began in September when tensions at a flashpoint holy site in Jerusalem revered by Jews and Muslims boiled over, amid rumours that Israel planned to relax long-standing rules to strengthen Jewish rights at the complex.

Israel has repeatedly denied such claims.”

However, BBC audiences have been provided with little, if any, information on the topic of the sources and history of those “rumours” or the mechanics of their dissemination – including by means of official Palestinian Authority and Fatah channels. That fact will come as no surprise to anyone familiar with the BBC’s coverage – or lack of it – of one of the prime sources of conspiracy theory and incitement surrounding Temple Mount: the Northern Islamic Movement.

Two years ago the BBC Jerusalem Bureau’s Yolande Knell portrayed that organization as “conservative” but failed to inform audiences of its agenda and its links to Hamas and the Muslim Brotherhood. Whilst citing issues concerning Temple Mount as contributing to “tensions” which led to a wave of terror attacks against Israelis in October and November 2014, the BBC refrained from informing its audiences about the existence of organised groups purposely set up by the Northern Islamic Movement to cause unrest at that site. When, in September 2015, two of those organised groups were outlawed, the BBC described them as “Muslim groups” (rather than Islamist) and failed to provide audiences with information concerning their political and ideological affiliations.

“For years, the northern branch of the Islamic Movement has led a mendacious campaign of incitement under the heading ‘Al Aqsa is in danger’ that falsely accuses Israel of intending to harm the Al Aqsa Mosque and violate the status-quo. In this context, the northern branch has established a network of paid activists (Mourabitoun / Mourabitat) in order to initiate provocations on the Temple Mount. This activity has led to a significant increase in tension on the Temple Mount. A significant portion of recent terrorist attacks have been committed against the background of this incitement and propaganda.

Outlawing the organization is a vital step in maintaining public security and preventing harm to human life.

The northern branch, headed by Sheikh Raad Salah, is a sister movement of the Hamas terrorist organization. The two movements maintain a close and secretive cooperation. The northern branch of the Islamic Movement is a separatist-racist organization that does not recognize the institutions of the State of Israel, denies its right to exist and calls for the establishment of an Islamic caliphate in its place. The northern branch of the Islamic Movement belongs to radical Islam and is part of the global ‘Muslim Brotherhood’ movement. The two movements share an extremist ideology and a common goal – the destruction of the State of Israel.”

Whilst there was no reporting of that news on the English language BBC News website, we can determine that the corporation is aware of it because the story did get coverage on BBC Arabic. In that report the Northern Islamic Movement is described as a group “which provides educational, religious services for the Palestinians inside Israel” and its Hamas and Muslim Brotherhood links are once again concealed. 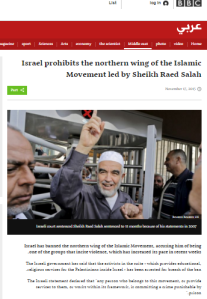 In June 2011 journalist John Ware wrote an article about the ban on entry into the UK of the Northern Islamic Movement’s leader, Raed Salah, in which he noted that:

“Although the Islamic Movement is not banned in Israel, it is closely aligned to Hamas, which is designated in the UK and mainland Europe as a terrorist organisation.[…]

Sheikh Salah’s Islamic Movement is reported to have mourned the death of Osama Bin Laden, calling him a “martyr” and his killers “Satanic”.[…]

Another consideration may have been an article that Sheikh Salah wrote three weeks after the 9/11 attacks, in which he said that unlike Muslim workers in the World Trade Center, Jewish workers had been absent on 9/11. […]

He [Salah] is also reported to have made a speech in February 2007 during a protest in East Jerusalem in which he accused Jews of using children’s blood to bake bread – allegations the sheikh strongly denies.”

That article appeared – and is still available – on the BBC News website. We can therefore conclude that the BBC knows full well that the Northern Islamic Movement is much more than a group engaged in the provision of “educational, religious services” and that of course raises the question of why the corporation continues to whitewash an Islamist group responsible for much of the incitement underpinning the current wave of terrorism against Israelis.