On December 4th the BBC News website’s Middle East page published its first report since the beginning of the month concerning the ongoing wave of terror attacks against Israelis. The previous report dedicated to such terror attacks had appeared on November 23rd and the last mention of any of the daily attacks had been in an article on another topic which was published on November 24th.

The headline chosen by the BBC after that ten-day hiatus in reporting was “Four Palestinians killed after attacks on Israelis in West Bank” and the report was presented on the website’s Middle East page under a title which also chose to prioritise the deaths of terrorists killed whilst carrying out violent attacks. 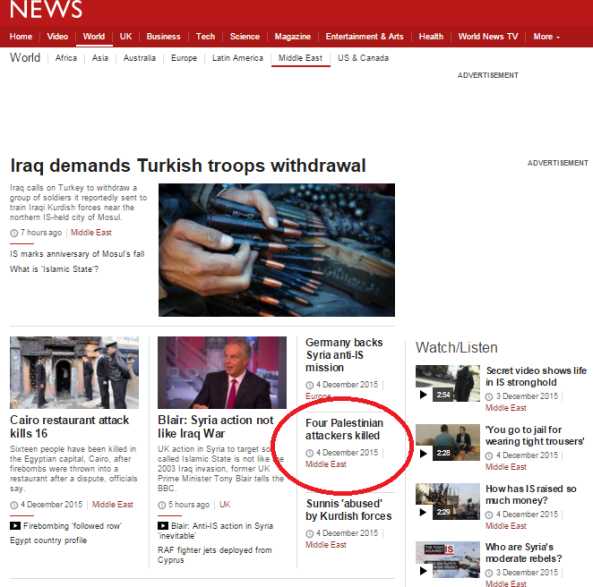 The report relates to three separate attacks on members of the Israeli security forces which took place in Hebron, near the village of Abud and near Ofra. Why those particular incidents were deemed more newsworthy than any of the numerous others which had taken place in previous days is unclear but it is notable that the December 3rd attack at Hizme in which a soldier and an Arab-Israeli civilian were wounded by a terrorist reported to be a member of the Palestinian Authority security forces did not receive BBC coverage. 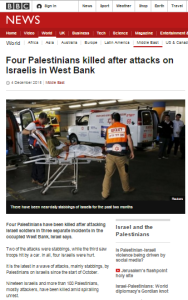 Readers of this article once again saw presentation of background information which – as has been the case since BBC reporting on the current wave of terror began – avoids informing audiences in the corporation’s own words that rumours concerning changes to the status quo on Temple Mount are unfounded.

“The surge in violence began in September when tensions at a flashpoint holy site in Jerusalem revered by Jews and Muslims boiled over, amid rumours that Israel planned to relax long-standing rules to strengthen Jewish rights at the complex. Israel has repeatedly denied such claims.”

Likewise, the editorial policy of refraining from carrying out any serious reporting on the topic of the incitement and glorification of terrorism underpinning the current wave of violence – and especially that coming from official Palestinian Authority and Fatah sources – is maintained.

“Israel says Palestinian incitement has fuelled the attacks. The Palestinian leadership has blamed frustration rooted in decades of Israeli occupation.”

Almost three months into this wave of terror attacks, it is remarkable that the self-styled “standard-setter for international journalism” – which is legally obliged to provide its funding public with accurate and impartial information aimed at enhancing their “understanding of international issues” – has to date failed to produce even a single report on the issue of Palestinian Authority incitement and glorification of terrorism.