The BBC Complaints department’s response to complaints relating to a segment of a phone-in show hosted by Simon Lederman which was broadcast on BBC Radio London on December 22nd is as follows. 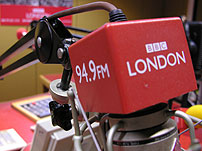 “The aim of Simon Lederman’s overnight phone-in is to discuss issues and to explore wide-ranging views.

The listener in question called the programme saying he wanted to talk about his belief that the UK is a plutocracy not a democracy. That was the reason he was put to air in the first place, but it soon became clear that he had another agenda about Zionism and Simon chose to explore and challenge those opinions. The caller was repeatedly challenged throughout the call, to such an extent that, at one point, the caller complained that he was not being allowed to make his point. Simon eventually ended the call saying “we’re back to where we started” and it was clear the discussion was not progressing.
With regard to the length of the call, phone in programmes in the middle of the night are generally more conversational and callers are often given more time than at other times of the day because it is a quieter period with more time to develop discussions.

When debating controversial and sensitive subjects such as this, there is potential for offence, but Simon Lederman is an experienced journalist with a good understanding of BBC Editorial policy which he made every effort to follow on this occasion by robustly challenging the caller. However, BBC Radio London apologises for any offence caused by the caller’s views.”

This is the second time that the BBC has claimed that the caller was “challenged on his views throughout the conversation” but as was noted here at the time; that is not actually the case.

“The repeated claim that “Zionist Jews” control and “own” the Bank of England, the Federal Reserve, corporate America and the media was not adequately challenged: at no point did the presenter inform listeners that those claims are simply untrue.

The inaccurate claim that “most of the Jews of the world” come from “an empire called Khazaria” was not challenged at all. That perhaps is a little less surprising when one considers that the BBC has previously given airtime to the main proponent of that myth.

The inaccurate assertion that “real” Judaism “has nothing to do with Zionism” was not challenged and neither were the inaccurate claims that “Balfour created essentially the State of Israel” and that “the British had a protectorate” in Palestine. Indeed the reaction from the presenter to those last two inaccuracies was to say “right”.”

Causing offence is just one aspect of this story; the other is the mainstreaming of falsehoods, antisemitic discourse and conspiracy theories on public radio. To that, the BBC has yet to provide an adequate and responsible response and, until it admits that the caller’s agenda was not “about Zionism” (which, notably, this BBC response classifies as a “controversial” topic) but about getting a platform for the spread of antisemitic tropes, it is doubtful that it will be capable of doing so.