Courtesy of the Jewish Chronicle we learn that Lyse Doucet’s programme ‘Children of the Gaza War’ which was broadcast by the BBC last summer has been nominated for a BAFTA award. 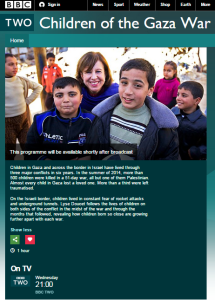 “A BBC documentary which substituted the word “Israeli” for “Jews” in its translation of interviews with Palestinians has been nominated for a Bafta.

Children of the Gaza War, which aired on BBC2 in July, followed journalist Lyse Doucet as she spoke to children in Israel and Gaza in the wake of the 50-day war. […]

At the time of its airing, Ms Doucet stood by the decision to translate “yahud” as “Israeli” in subtitles on her hour-long documentary.

The correct translation for “yahud” from Arabic to English is “Jew”.

The BBC’s chief international correspondent said that Gazan translators had advised her that Palestinian children interviewed on the programme who refer to “the Jews” actually meant Israelis.”

As readers may recall that mistranslation of the Arabic word ‘Yahud’ was not the first to be broadcast – and defended – by the BBC. In October 2013 the BBC Trust’s Editorial Standards Committee wrote the following in relation to a similar case:

“The Committee considered that the decision to translate the girl’s words as “an Israeli” was an appropriate exercise of editorial judgement. In taking this view the Committee emphasised that no interpretation of the Editorial Guidelines requires content producers to make direct word-for-word translations without also taking account of relevant context.” [emphasis added]

Complaints from members of the public concerning Doucet’s programme were similarly dismissed – even though the BBC had shown that it was capable of providing audiences with an accurate translation of the same word in different circumstances. Mistranslation was however not the only issue arising from Doucet’s programme.

The programme was heavily promoted by the BBC at the time, including on the BBC News Facebook account. That post prompted a high volume of comments – including many offensive and antisemitic ones which were left standing by the BBC.