Throughout the past six months consumers of BBC News reports on the subject of the wave of Palestinian terror attacks against Israelis have repeatedly been told that the reason for the surge of violence is the failure to resolve the Palestinian-Israeli conflict by means of the two-state solution.

“The recent rise in violence is blamed by Palestinians on the continued occupation by Israel of the West Bank and the failure of the Middle East peace process.”

As has been documented here on many occasions during that time, the BBC’s framing of the issue has not only excluded official Palestinian incitement and glorification of terrorism from audience view but has also sidelined additional factors underpinning the violence.

BBC audiences have thereby been steered towards a specific narrative, according to which were “the Middle East peace process” resumed and were it to bring about an end to “the continued occupation by Israel of the West Bank”, terrorism against Israelis would end.

While promoting that narrative the BBC has managed to avoid telling its audiences about the PA president’s public rejection of recognition of Israel as the Jewish state and the PA’s rejection of the renewal of direct negotiations with Israel but another point concerning that narrative is also worthy of note.

Remarkably, the BBC’s chosen narrative takes it as read that Palestinian grievances would be brought to an end by Israeli withdrawal from the areas previously occupied by Jordan which came under its control in 1967. That premise is never examined by BBC journalists and all evidence to the contrary has been serially ignored over the years. 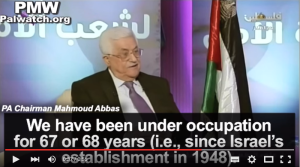 Palestinian Media Watch (PMW) recently published examples of the kind of messaging produced by official PA sources for their local audiences in which Israel is erased from the map, Israeli towns and cities are described as ‘Palestinian’ and the ‘occupation’ is said to have begun with Israel’s creation – including by the PA president in a television interview last month.

If the BBC is to fulfil its requirement to “build a global understanding of international issues” it obviously needs to inform its audiences of this side of the story of the “failure of the Middle East peace process” too.  Its continuing avoidance of that topic is indicative of the fact that the advancement of a politically motivated narrative takes precedence over meeting that remit.

The Palestinian TV show the BBC will not tell you about