On the morning of May 13th the 14.3 million followers of the BBC News (World) Twitter account were informed that Israel had assassinated a Hizballah commander.

The BBC News website article to which audiences were directed in that (now non-existent) Tweet was titled “Top Hezbollah commander Badreddine killed in Israel strike” and it opened as follows:

“A senior Hezbollah commander has been killed in an Israeli operation in Syria, the Lebanon-based Shia militant organisation says.

Israel has so far made no public comment on the claim.”

Did Hizballah really issue such a statement and did the BBC independently verify its accuracy before informing millions of people around the world that Israel had killed Badreddine? Obviously not because the next version of the article – retitled “Top Hezbollah commander Badreddine killed” – revealed that the information had come from a less than reliable source.

“A senior Hezbollah commander has been killed in an Israeli operation in Syria, the Lebanon-based Shia militant organisation says.

It did not provide details, but Lebanon’s al-Mayadeen TV said Mustafa Amine Badreddine died in an Israeli air strike near Damascus airport.

Israel has not commented on the claim.”

As we noted on these pages three years ago:

“British readers may have heard of the ‘Al Mayadeen’ TV station which was launched in June 2012 as an alternative to Al Jazeera and broadcasts from Beirut – if only because it employs one George Galloway for, according to The Times, some £80,000 a year. Those familiar with Galloway’s record at the Iranian outfit ‘Press TV’ will perhaps not be surprised to learn that Al Mayadeen’s financial backers are alleged to be Iranian and Syrian. That is denied by the station’s Tunisian director, who formerly worked for Al Jazeera – as did his colleague Sami Kleib (also spelt Kulyab). Kleib’s wife Luna Shibl – previously of Al Jazeera too – has apparently worked as a media advisor to Bashar al Assad.”

In fact, as the Times of Israel – among others – reported, Hizballah’s statement did not say that Badreddine had been killed by Israel at all: that notion originated from Lebanese media reports.

“Hezbollah’s top commander in Syria, Mustafa Badreddine, was killed in a purported Israeli airstrike in the country earlier this week, according to Lebanese media reports.

A statement from the organization early Friday confirmed Badreddine’s death, but did not blame Israel for the airstrike that killed him, which reportedly took place near Damascus’s airport on May 10.

Several Lebanese television outlets, including the al-Mayadeen channel thought to be close to Hezbollah, said early Friday that Israel carried out the attack.”

The subsequent version of the BBC’s report – again retitled “Hezbollah commander Mustafa Amine Badreddine killed” – inaccurately informed audiences that the claim which had not actually been made by Hizballah has been “rolled back”. 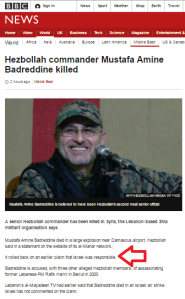 “A senior Hezbollah commander has been killed in Syria, the Lebanon-based Shia militant organisation says.

Mustafa Amine Badreddine died in a large explosion near Damascus airport, Hezbollah said in a statement on the website of its al-Manar network.

It rolled back on an earlier claim that Israel was responsible.”

That claim remained in situ in two additional versions of the article.

Significantly, none of the versions of the report inform BBC audiences that Hizballah is an internationally designated terrorist organization but the BBC did find it appropriate to highlight its charity work.

“Hezbollah, the Party of God, is a Shia Islamist political, military and social organisation that wields considerable power in Lebanon.”

The sixth version of the report inaccurately informs audiences that the second Lebanon war took place two years after its actual date.

It is of course highly unlikely that those who read the initial versions of this BBC report would have bothered to revisit it, meaning that their take-away message includes unverified and inaccurate information sourced from an ideologically motivated and notoriously unreliable propaganda outlet which, according to AP, has since removed the claim.

“The Beirut-based Al-Mayadeen TV, which is close to the Lebanese Shiite group, earlier said Badreddine was killed in an Israeli airstrike but later removed the report.”

Licence fee payers would no doubt expect the BBC – committed as it is to accurate and impartial reporting – to carry out independent verification of such serious claims before aiding their amplification worldwide in ‘shoot from the hip’ reporting.