A guest post by AKUS
The Guardian has been caught out in a fauxtography fail when it reported on 29th September 2014 on an otherwise barely noticed anti-Israel demonstration in Oakland, California.

According to The Guardian 200 anti-Israel protesters managed to cow the International Longshore and Warehouse Union into agreeing not to unload the Israeli-owned ship Zim Shanghai in the Port of Oakland, CA.
There’s something quite funny about a group of burly longshoremen being shouted into submission by a group of screaming yahoos. Perhaps that is why The Guardian chose to post this picture instead:

But suddenly a few alert readers noticed something strange about the picture:

Pretzelberger did a little more digging and this is what he found:

Michael Brown’s original article dated 21st August 2014 about Ferguson does indeed contain the snap The Guardian inexplicably decided to use for the story about the Israeli cargo ship dated 29th September 2014! 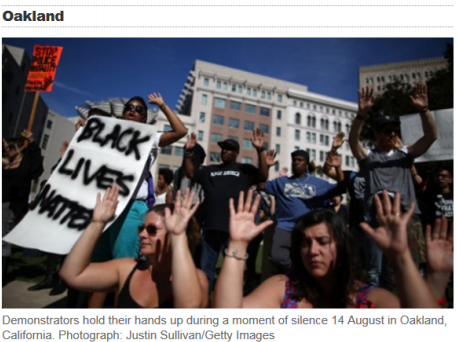 So h/t to Dickboy2 and pretzelberger for discovering this incredible reuse and misuse of material.
When it comes to misreporting from Oakland about Israel The Guardian’s motto seems to be “Any port in a storm”.
Footnote:
While the Zim Shanghai was heading to the Port of Los Angeles to be unloaded unhindered there may now be substantial financial repercussions for the Port of Oakland due to its perceived unreliability. There is not only the possibility of losing 150 visits by Zim ships each year but other shipping companies could now become wary of docking there.