An article which first appeared on the BBC News website’s Middle East page on June 3rd under the headline “Middle East peace talks to start in Paris” underwent amendments and changes no fewer than seven times in the hours that followed and it now appears under the title “Israel-Palestinian two-state solution ‘in serious danger’“. 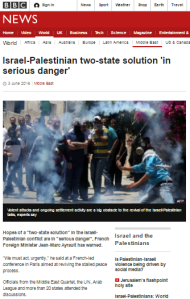 The caption to the image currently appearing at the head of the report presents readers with some clear framing, invoking anonymous “experts” but failing to provide information which would enable them to assess the relevance or validity of the claims made by those sources.

“Violent attacks and ongoing settlement activity are a big obstacle to the revival of the Israeli-Palestinian talks, experts say”

All versions of the report include a highly selective and superficial portrayal of the collapse of the last round of talks between Israel and the PLO.

“There have been numerous rounds of peace talks between Israel and the Palestinians since the early 1990s, with the most recent collapsing in acrimony in April 2014.

The Palestinians accused Israel of reneging on a deal to free prisoners, while Israel said it would not continue negotiations after the Palestinians decided to bring the Islamist Hamas movement into a unity government.”

The actual sequence of events was of course much more complex and as has been noted here before:

“…the Palestinian Authority made three important choices between March 17th and April 23rd (not to accept the American framework, to join international agencies in breach of existing commitments and to opt for reconciliation with Hamas) which had a crucial effect on the fate of the negotiations.”

All versions of the article include the following statement:

“Some of the most intractable issues include the status of Jerusalem, Jewish settlements in the occupied West Bank and Palestinian statehood.”

Notably, no less crucial issues such as the insistence upon the ‘right of return’ for Palestinian refugees, Palestinian terrorism and the Palestinian refusal to relinquish any future claims by recognising Israel as the Jewish state are not brought to the attention of readers.

From its third version onwards the article included ‘analysis’ from the BBC’s Middle East editor which was altered in the last version. The earlier comments from Jeremy Bowen promoted the often seen theme of aggrandizement of the Palestinian Israeli conflict.

“The French President, Francois Hollande, said that with terrorism spreading around the world it is essential to push once again for peace between Israel and the Palestinians.

President Hollande delivered a stern warning. Violence is rife, he said, and hope is diminishing. People should not fool themselves that the conflict between Israelis and Palestinians has become a peripheral issue just because of the turmoil elsewhere in the region.

The president is right. The conflict between the Palestinians and the Israelis is as full of poison as ever and can still create new international crises.”

The version of Bowen’s analysis found in the latest version of the report includes curious speculation and irrelevant – but nevertheless revealing – messaging.

“The Israeli foreign ministry called the conference a missed opportunity. It said pressure should have put on Mr Abbas, to talk one on one with Israel’s Prime Minister, Binyamin Netanyahu.

That suggests the Israeli government feels under pressure. Mr Netanyahu has also been criticised for appointing a controversial hardliner, Avigdor Lieberman, as defence minister. Former Prime Minister Ehud Barak said the move showed the seeds of fascism had infected Israel.”

Incredibly, over some sixteen hours BBC News devoted publicly funded resources to producing eight different versions of this report about an at best symbolic ‘conference’ (described even by the New York Times as an “extended photo opportunity”) that lasted the grand total of three hours.

Whilst it did seize the opportunity to communicate one-sided politicised framing of the topic to audiences, bizarrely the BBC had nothing to tell them about the prime factor behind the message in the article’s headline and opening paragraph.

“Hopes of a “two-state solution” in the Israeli-Palestinian conflict are in “serious danger”, French Foreign Minister Jean-Marc Ayrault has warned.”

Apparently the BBC’s Middle East ‘experts’ did not think it necessary to “enhance audiences’ awareness and understanding of international issues” by informing them of the decidedly relevant fact that various Palestinian factions – including Hamas – completely reject the concept of the two-state solution.