For some time now the Palestinian Authority’s Jibril Rajoub has been exploiting sport as a means of delegitimising Israel for political ends. In recent years he has, among other things, tried to get Israel expelled from the International Olympic community, threatened legal action against sponsors of the Jerusalem Marathon and pressured UEFA to disallow Israel’s hosting of a tournament. As president of the Palestinian Football Association, last year Rajoub turned his attentions to FIFA and the BBC produced a series of reports amplifying his campaign to get Israel suspended from world football.

This week (as civilians in Syria continue to have their human rights violated by being killed en masse) one of the BBC’s most quoted and promoted NGOs found time to publish a report which yet again highlights both the links between the agendas of some so-called human rights organisations and anti-Israel campaigning – as well as the media’s relationship with such groups.

“The football-as-human rights-violation arguments against Israel are tendentious and prove too much. So those campaigning against Israel rely principally on a lawyerly claim about FIFA’s rules: The clubs “clearly violate FIFA’s statutes, according to which clubs from one member association cannot play on the territory of another member association without its and FIFA’s consent,” the members claim.

The problem is nothing in the FIFA statutes that equates “territory” with sovereign territory. Indeed, that would be impossible, since many FIFA members are not sovereign states at all. Instead, territory, as is often the case in international texts, means jurisdiction.

This is because the FIFA is not a border demarcation body. That is why FIFA clearly separates any question of sovereign statehood and territory from FIFA membership by not requiring that member federations be recognized states (i.e. Hong Kong, American Samoa, Faroe Islands, Northern Ireland, etc.). The claim that the acceptance of the Palestinian soccer federation into FIFA constituted a recognition of Palestine as a state and a recognition of its maximal border claims is unsupportable. FIFA membership does not imply statehood, nor has FIFA ever taken a position on preexisting border disputes.”

Nevertheless, as noted in a comment on a previous post (thanks to D), the BBC World Service found HRW’s political campaigning worthy of inclusion in some of its summaries of world news on September 26th. 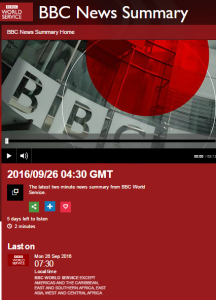 Listeners to this news summary were told (at 01:47) that:

“…Human Rights Watch is calling on world football’s governing body to force the relocation of six Israeli football clubs located in West Bank settlements considered illegal under international law. The campaign group says that FIFA is breaking its own rules.”

Those who tuned in to a later news bulletin were informed (at 01:45) that:

“…Human Rights Watch has called on world football’s governing body FIFA to force the relocation of six Israeli football clubs based in West Bank settlements considered illegal under international law. The Israeli authorities say it’s not up to FIFA to rule on political questions.”

As usual, no attempt was made to conform to editorial guidelines on impartiality by clarifying to audiences the existence of legal opinions which contradict that well-worn BBC mantra on the alleged illegality of Israeli communities in Area C and parts of Jerusalem. Moreover, despite those same editorial guidelines, no effort was made to clarify the “particular viewpoint” of HRW in relation to Israel and listeners were therefore unable to assess the group’s claims in the appropriate context.

Although this latest example of unchallenged BBC amplification of HRW’s politicised agenda is entirely predictable, it is of course extremely disturbing to see it being promoted in supposedly factual news bulletins.