The first article is 447 words long including sub-headings. Two hundred and thirty of those words were devoted to the topic of the Palestinian-Israeli conflict and a further 86 words to a version of an insert titled “What is the two-state solution?” which has been seen in previous reports.

Twenty-three words were used to promote a theme which has been evident in several recent BBC reports: a supposed ‘policy shift’ on the two-state solution on the part of the US administration.

Sixty-one words were devoted to amplification of criticism of the visit, together with a link to a partisan statement from individuals including anti-Israel activists.

Background information concerning the official visit was provided in 27 words and just seventeen words were used to describe its aim.

“Mr Netanyahu is in Australia for talks about expanding co-operation in cyber security, technological innovation and science.” 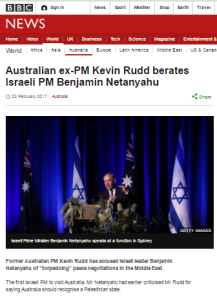 The second article is 349 words long including sub-headings. Forty-nine words were devoted to background information. The rest of the article was given over to amplification of criticism of the visit including a link to statements made by one individual.

In summary, 45% of the 796 words produced by the BBC concerning the Israeli prime minister’s visit to Australia amplified criticism of that visit. 39% of the total word count was given over to the topic of ‘the conflict’ while 9.5% of the word count provided background information concerning the visit.

A mere 2% of the total word count related to the aim of the official visit, with BBC audiences receiving no information whatsoever about the research and travel agreements signed between the two countries.

Clearly the framing chosen by the BBC for this story was a lot less about providing audiences with an objective and informative account of the first official visit of an Israeli prime minister to Australia than it was about influencing audience perceptions through promotion of a politically motivated narrative.

BBC News and the US ‘major policy shift’ that wasn’t