Overall, coverage of the 2019 election conformed to the agenda evident in the BBC’s reporting of the two previous ones.

As we saw in an earlier post the BBC News website published fifteen reports relating to the 2019 general election in Israel between the date of its announcement and the commencement of polling.

As has been the case in previous years, the vast majority of the contending lists were totally ignored in that coverage. Most of the BBC’s attention was once again focused on the right of the political map with the exception of the Blue & White Party.

Of the seven contenders featured in a BBC backgrounder about the election’s “key candidates”, three (Naftali Bennet, Ayelet Shaked and Moshe Feiglin) failed to secure any seats at all in the Knesset and one (Avi Gabbai) got just six seats.

Israel election: ‘Bibi the magician’ pulls off another trick  by Lyse Doucet

While audiences saw significantly fewer interviews with Palestinian commentators than in previous years, those two reports nevertheless revived the favoured BBC practice of framing Israeli elections  in terms of their potential effect on ‘the peace process’. 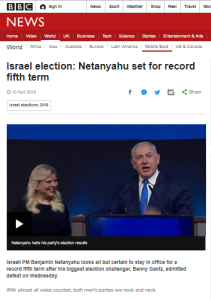 The first article included a section titled “What does it mean for the peace process?” which began by whitewashing terrorists’ rocket attacks on Israeli civilian communities.

“Recent weeks have seen tensions flare between Israel and Palestinian militants in the Gaza Strip, and US President Donald Trump is expected to publish his plan which aims to solve Israel’s long-standing conflict with the Palestinians soon.”

Readers then saw a portrayal of the two-state solution which (as has been BBC practice for over two years) promotes the Palestinian interpretation of that term.

“Many Israelis appear to see little hope in the longstanding international formula for peace – the “two-state solution”. The phrase denotes a final settlement that would see Israel living peacefully alongside an independent state of Palestine, defined within pre-1967 ceasefire lines in the occupied West Bank, East Jerusalem and Gaza.”

That framing was again reinforced just a few paragraphs later in the Saeb Erekat quote which appears to be a near permanent feature in any BBC report mentioning ‘the peace process’. 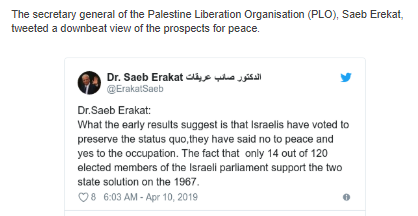 “The disillusion and despair in Palestinian communities in the West Bank and Gaza will be even greater as they see the results of an election, in which they had no say, that will shape their future.

“There’s no difference between one party or another,” comments veteran Palestinian politician Mustafa Barghouti, chairman of the Palestinian National Initiative. “All of them are calling for the continuation of the occupation and settlement building.”” [emphasis added]

Doucet did not bother to clarify that the reason residents “in the West Bank and Gaza…had no say” is because they are not Israeli citizens and they instead have the right to vote in elections for the Palestinian parliament if and when those take place.

As was the case in BBC coverage of the two previous elections in 2013 and 2015, coverage of this election presented a picture which disproportionately focused on one side of the Israeli political map with audiences learning very little about the policies of participating Centrist and Leftist parties.

Overall, the BBC News website’s selective coverage of the 2019 election conformed to the agenda evident in the corporation’s reporting of the two previous ones. Israel was once again portrayed as a country ‘shifting’ to the right and that alleged shift was depicted as the exclusive reason for the predicted failure to make progress in ‘the peace process’.

In order to promote that framing, the BBC of course has to ignore the fact that no matter which Israeli political party has won elections over the past twenty-seven years, all attempts to bring an end to the conflict have been met with a negative response from the other side.

And yet, despite its obligation to “build people’s understanding” the BBC continues its dumbed-down, narrative-driven portrayal of the ‘peace process’ as being entirely dependent upon the paper placed in the ballot box by Israeli voters.

Reviewing the BBC’s record of reporting on Israeli elections