A series of 25 programmes by the BBC's Middle East editor launches on Radio 4.

Although it did take nearly four years, the BBC has finally given its Middle East editor a foodie slot as suggested on these pages in 2013.

“Jeremy Bowen’s Middle Eastern food quiz” is however just the appetizer for a new series of programmes – 25 in number – on BBC Radio 4 titled “Our Man in the Middle East” which began on May 15th. 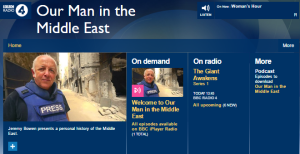 “Over these 25 programmes, Jeremy reflects on the present and the past of the Middle East, after reporting from the region for more than a quarter of a century. He combines first-hand accounts from the front line with an in-depth look into the region’s history. He has witnessed endless wars between individuals, religious groups and full-sized states, jostling for military, political and economic power. He has interviewed dictators, fanatics and fundamentalists as well as the ordinary people caught up in their dangerous games. In that time, the past has always been present, providing motivation and political ammunition. Bowen has made headlines himself and he has paid a personal price, coming under fire and losing a colleague in the course of reporting – on the worst day, he says, in his life.”

The incident to which that last sentence refers took place in 2000 and has been revisited by Bowen on numerous occasions since.

Of the six episodes advertised so far, three relate to Israel:

‘BBC Middle East Editor Jeremy Bowen reflects on the allure and intractable challenge of the Holy City. “The tectonic plates of religion and culture come together in Jerusalem,” he observes. “When they move, we all feel it.”‘

‘How the assassination of Israeli Prime Minister Yitzhak Rabin changed the region’s history, as remembered by BBC Middle East Editor Jeremy Bowen. “No political killing in the twentieth century was more successful,” he argues, observing the dramatic effects on the Oslo peace process. “Perhaps there was a moment for peace, and it came, and went.”‘

‘How a gas container explains the divide between the Israelis and the Palestinians. Jeremy Bowen, the BBC’s Middle East Editor, was only trying to warm his home during the winter in Jerusalem. During the process, he discovered that the Palestinians are even at loggerheads over simple things like heating. “It’s a place where the conflict is always in your face. So is religion, ” he says.’

As the fiftieth anniversary of the Six Day War approaches, we can assume that Bowen will be revisiting that topic too in future episodes of this series.

An Inside Look at the BBC Ruling Against Jeremy Bowen (CAMERA)