The BBC's Tom Bateman presents a context-free account of the Six Day War and its consequences.

“Palestinian Azzam Abu Saud, who fought with the Jordanian army in the 1967 Six Day War, recalls being “defeated completely” by Israel.” 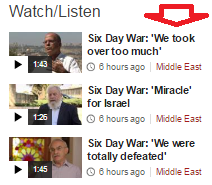 As well as appearing as stand-alone items, those three videos were also embedded in a report by Tom Bateman that appeared in the Middle East page’s ‘Features’ section on the same day under the title “How the Six Day War brought elation and despair“.

In that report, Bateman paraphrases both Israeli interviewees, again spelling Rabbi Dr Yoel Bin Nun’s name wrong and reinforcing the take away message that (as the titling of the videos indicates) audiences are intended to take away from the video featuring Meir Shalev. 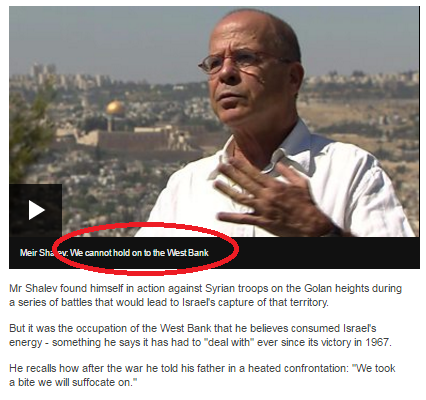 Readers of this article might well wonder if Tom Bateman has actually been to the Western Wall:

“The author Meir Shalev was brought to this spot as a boy to look across at the Western Wall – which at the time could not be accessed by Israelis.

He would gaze at the top few bricks of this holy Jewish site while his father told him: “You will grow up, you will become a soldier and you will fight over this city.”” [emphasis added]

Erasing from audience view the crucial context of the 1948 invasion of the nascent Jewish state by Arab countries intent on its destruction as well as the subsequent 19-year occupation of parts of Jerusalem by Jordan, Bateman continues with the following ambiguous portrayal of the situation before 1967:

“At the time Jerusalem was divided between Israeli and Jordanian control.

It followed the 1949 armistice that divided the new Jewish state of Israel from other parts of what had been British Mandate Palestine.”

His portrayal of the Six Day War is no less airbrushed:

“The outbreak of war on 5 June 1967 would change many lives – and reshape that part of the Middle East.

Israel launched a pre-emptive attack on Egypt and battled Jordanian and Syrian forces the same day.”

Bateman refrains from providing audiences with any information concerning the actions and incidents which led up to the war and readers unfamiliar with the details of that 50-year-old event would therefore be quite likely to mistakenly assume that “the outbreak of war” was caused by Israel’s “pre-emptive attack.” Egypt’s closure of the Straits of Tiran, its demand to remove UN forces from the Sinai Peninsula, its massing of troops in Sinai and the public threats to destroy Israel made by Nasser and other Arab leaders were apparently all deemed irrelevant to the story by the BBC’s latest Middle East correspondent.

Bateman does however make sure to include a partisan standard BBC mantra in his article:

“Yoel Ben [sic] Nun later became a rabbi and joined the movement building Jewish settlements in the West Bank – the territory that Palestinians want for a future state.

The settlements are considered illegal under international law, though Israel disputes this.” 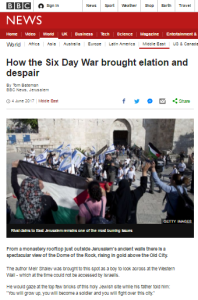 The later part of Bateman’s report is devoted to ‘informing’ readers of the knock-on effects of the Six Day War.

“For Palestinians, the war represented the loss of land following what they saw as the catastrophe of the first Israeli-Arab conflict two decades earlier. […]

Fifty years on, from her home in East Jerusalem, she speaks of her desire to return to her family’s village of the 1940s.

“I still feel the hurt, pain and intolerable struggle,” she says.

“We were never able to go back. I’m still hurting. We are still suffering.””

Failing to inform readers that the Arab nations had done nothing to advance “Palestinian statehood” throughout their entire 19 year occupation of the Gaza Strip, Judea & Samaria and parts of Jerusalem, Bateman quotes a former Jordanian pilot:

“The Israeli territorial increase, claims Mr Erdisat, made it harder to negotiate a “just solution” on the issue of Palestinian statehood.”

The same interviewee is quoted as saying “[w]e were very excited that finally we would get the chance to fight the Israelis and get Palestine back” but Bateman fails to clarify to audiences the significance of that statement.

With no mention whatsoever of post Six Day War Israeli offers to negotiate peace with the Arab nations – and their refusal in the form of the Khartoum Declaration – Bateman closes his article with a whitewashed reference to Palestinian terrorism:

“But its [the war’s] legacy further fuelled Palestinian national aspirations.

Occupation became central to their calls to activism and militancy, placing it firmly on the international agenda for years to come.”

Understanding the Six Day War and its consequences is impossible if crucial context is erased. That context includes not only the Egyptian actions that directly sparked the conflict, but the underlying refusal of the Arab states to accept Israel’s presence. That refusal was of course the basis of what Bateman euphemistically refers to as “the first Israeli-Arab conflict two decades earlier” as well as the Six Day War and the subsequent Yom Kippur War.

It is, however, very clear that the aim of this article and its accompanying videos is not to enhance audience understanding of a historic event, but to steer BBC audiences towards the view that the contemporary Palestinian-Israeli conflict is entirely the product of events that began fifty years ago when – according to the BBC’s omission-ridden presentation – Israel woke up one sunny morning and “launched a pre-emptive attack” that a week later turned into “occupation”.