Four years on, the BBC's defence correspondent presents a different view of the Iron Dome.

Back in March 2013, the BBC’s defence correspondent Jonathan Marcus wrote an article entitled “Israel’s Iron Dome: Doubts over success rate” which appeared on the Middle East page of the BBC News website. 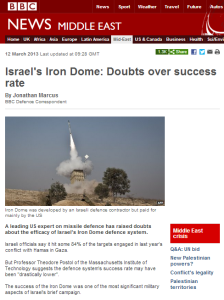 “A leading US expert on missile defence has raised doubts about the efficacy of Israel’s Iron Dome defence system.

Israeli officials say it hit some 84% of the targets engaged in last year’s conflict with Hamas in Gaza.

But Professor Theodore Postol of the Massachusetts Institute of Technology suggests the defence system’s success rate may have been “drastically lower”.”

Mr Marcus took great exception at the time to our critique of the claims made by his source. Six weeks later, the BBC News website published filmed and written reports by Kevin Connolly on the same subject, asking “Does Israel’s Iron Dome actually work?”.

Fast forward to July 4th 2017 when an article by Jonathan Marcus appeared on the BBC News website’s US & Canada page under the title “North Korean missiles: Can the US defend itself?“

In that article, after giving some historic overview on the subject of missile defence systems, Marcus tells readers that:

“… the threat that missile defence is now ranged against is very different. It is not – despite Russian protests – aimed at weakening Russia’s nuclear forces. It is designed to protect against a very specific threat – from Iran or North Korea’s developing missile arsenals.

Against this kind of threat, the requirement is not simply to alter an adversary’s strategic calculations, but to stop each and every missile getting through.

Technology has advanced dramatically with some of the most significant strides being made by Israel. Its interceptor systems and their associated radars – funded in large part by the US – have shown themselves spectacularly successful, even though against a full-scale onslaught even Israel’s system would be sorely tested.”