BBC issues a correction to its inaccurate 'Jewish riots' claim.

Back in May an edition of the BBC Radio 4 programme ‘The World Tonight’ was broadcast from Manchester following a terror attack in the city the previous day. As was noted here at the time, during a discussion about “tensions that have riven the city in the past”, listeners heard presenter Ritula Shah refer to “Jewish riots in the 1940s”. 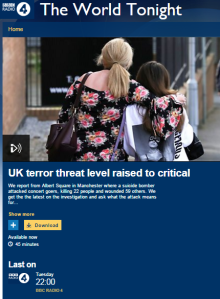 Contrary to that claim, records show that in early August 1947, during a bank holiday, rioting against Jews took place over a number of days in Manchester, Salford and additional towns and cities.

BBC Watch submitted a complaint about that error, requesting that audiences be relieved of the inaccurate impression of a seventy year-old event in the history of their own country by means of an on-air clarification in the same programme. The response received was unsatisfactory.

“I understand you found presenter Ritula Shah made an inaccurate comments about Jewish riots in the 1940s in Manchester.

Firstly, I’m sorry about the delay in getting back to you. I know people appreciate a prompt response and unfortunately we’ve taken longer to reply than usual – please accept our apologies.

I appreciate your comments and this was a discussion about the tensions in cities across Britain that have occurred throughout recent history. Please be assured it is never our intention to mislead our listeners Ritula was trying to provide some context to this discussion and was discussing how different communities in Manchester have at one time been divided.”

A second complaint was submitted and in its reply, BBC Complaints acknowledged the error but declined to take any corrective action.

“It’s clear you remain unhappy with Ritula Shah’s reference to the riots in 1947. Ms Shah had intended to refer to anti-Jewish riots in reference to the events in Manchester and elsewhere that year. This was a live interview and we accept that she could have been clearer in making this reference.

However the general point was, that despite the earlier comments made by a contributor that Manchester is a ‘tolerant’ city, there is a history of tension towards ethnic minority communities.

We’ve noted your points but do not consider they have suggested a possible breach of the BBC’s standards to justify further investigation or a more detailed reply. Opinions can vary widely about the BBC’s output, but may not necessarily imply a breach of our standards or public service obligations.

For this reason we do not feel we can add more to our reply or answer further questions or points. We realise you may be disappointed but have explained why we are not able to take your complaint further.”

BBC Watch then submitted a Stage 2 complaint to the Executive Complaints Unit to which we have yet to receive a reply. However, eight days later the following communication was received from BBC Complaints:

“Thanks again for raising your concerns with us about ‘The World Tonight’ as broadcast on May 23.

As part of your complaint we referred the reference to the programme’s editor. As a result of this, we’ve now published a statement on the Corrections and Clarifications page below:

We hope this helps resolve the matter to your satisfaction. Should you have any remaining concerns, the ECU can consider these as part of any appeal you wish to pursue.”

The published statement reads as follows: 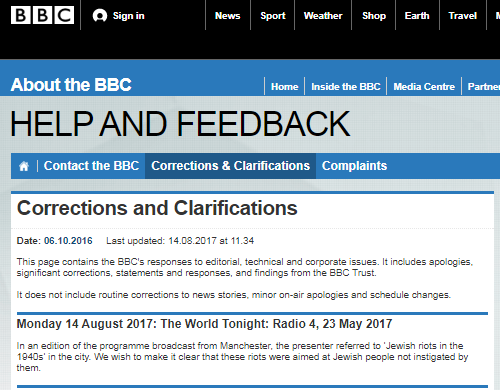 While that statement is obviously welcome, the likelihood that the listeners who were misled by the original inaccurate claim almost three months ago will see it is of course minimal.

This should have been a very simple issue to resolve. A genuine error was made and listeners to ‘The World Tonight’ could and should have been informed of that fact shortly afterwards. Instead, it took nearly three months of repeated communication to extract a simple correction that most members of the BBC’s audience will not see.