Listeners to a BBC WS report on the terror attack in Har Adar discovered what is in the narrative and what is not.

The September 26th edition of the BBC World Service radio programme ‘Newshour‘ included (from 33:54 here) a report supposedly about the terror attack that took place at Har Adar earlier the same day.

Unsurprisingly, presenter Julian Marshall portrayed the attack without using the words terror or terrorist: [emphasis in italics in the original] 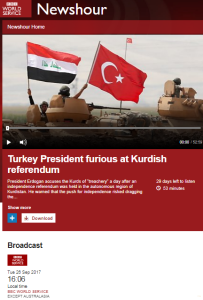 Marshall: “Let’s go now to Israel where President Trump’s Middle East envoy Jason Greenblatt has arrived in Jerusalem to try to revive Israel-Palestinian peace talks and shortly before his arrival there was a shooting incident on the occupied West Bank in which three Israelis were shot dead by a Palestinian gunman who was himself later killed by police. The Israeli Prime Minister Benjamin Netanyahu blamed the attack on what he called ‘Palestinian incitement’. The BBC’s Yolande Knell joins us now from Jerusalem and, Yolande, first tell us a bit more about that shooting incident.”

Knell: “Well the attack happened early this morning at Har Adar settlement. It’s just north-west of Jerusalem, just inside the occupied West Bank, and there are Palestinian workers there who were – with Israeli permits – going to work inside the settlement. They were queuing up for security checks. This man was among them and he had a work permit but his behaviour made security staff suspicious. When they asked him to stop he pulled out a gun and he shot and killed two of the private security guards from the settlement and one Israeli policeman as well. There was another security official who was badly injured and then the Palestinian man himself was shot dead. I was in the area just afterwards as an ambulance raced past. All surrounding roads were blocked off with a very heavy security presence.”

Marshall: “And…err…what has prompted the prime minister to blame the attack on ‘Palestinian incitement’?”

With BBC audiences being serially under-informed about Palestinian incitement, that question (notwithstanding the scoffing tone in which it was voiced) obviously provided an opportunity to enhance listeners’ understanding of the issue. Yolande Knell did not however step up to the plate.

Knell: “This is something that we have regularly seen from the Israeli prime minister. He also called on the Palestinian president Mahmoud Abbas to condemn the shooting and his deputy foreign minister Tzipi Hotovely linked this to the arrival of the US envoy Jason Greenblatt – he’s back here trying to revive the moribund peace process. She said that the Palestinians meant this as a reception for him and she suggested that the US should focus on getting the Palestinian leader to condemn such acts of violence before any peace initiative could be launched. And we’ve heard this a lot from Israeli leaders recently.”

In addition to side-stepping the very relevant topic of incitement, Knell also avoided a no less important subject raised by Tzipi Hotovely in the statement partly paraphrased by Knell.

“The terrible attack this morning in Har Adar is the reception that the Palestinians prepared for US envoy Greenblatt,” she [Hotovely] said in a statement. “The American efforts must focus first of all on stopping the murderous Palestinian terror before anything else. There can be no negotiations with those who only fan the flames of terrorism and continue to pay the families of terrorists.”

The issue of the PA’s payment of salaries to convicted terrorists, allocation of benefits to released prisoners and payments to the families of terrorists killed while carrying out attacks is one about which BBC audiences know next to nothing. Knell, however, sidelined that issue too and – choosing her words carefully – went on:

Knell: “Of course it’s very difficult for Palestinian leaders to come out..ehm…condemning individual attacks because many of these…err…attackers would be seen…by…many Palestinians as being heroes of some kind while the Israelis would see them as being terrorist. And there was actually a senior member of President Abbas’ Fatah movement who came out saying that Israel alone bears responsibility for what he called the crimes of the occupation. And then the…err…Palestinian militant group Hamas as well; their spokesman told the BBC…ahm…that this was a natural reaction – those were his words – to the occupation and he praised this attack.”

Knell did not bother to inform listeners that Abbas’ Fatah party glorified the terrorist on social media or that among the so-called “crimes of the occupation” cited by that Fatah “senior member” was “the incessant invasions by the herds of settlers of the Al-Aqsa Mosque plazas”.

Marshall then gave Knell the cue for a typically tepid and obfuscating portrayal of the breakdown of negotiations in 2014.

Marshall: “Ahm…Yolande, you referred to those…err…peace talks as moribund. In fact so moribund you’re going to have to remind us when the two sides last sat down to talk to each other.”

Knell: “Well it’s now three years since…eh…the peace talks – the last round of peace talks – which were brokered by the US – ehm…fell apart. And Jason Greenblatt is back, trying to help President Trump work towards what he’s called the ultimate deal but there have been many signs that this is not gathering momentum. Palestinian leaders making complaints that the US is not pressuring Israel to curb its construction of Jewish settlements on land they want for their future state.”

Knell of course knows full well that the phrase “construction of Jewish settlements” is inaccurate and misleading, with no new communities having been constructed for decades. She closed her report with the BBC’s standard – yet partial – mantra on ‘international law’.

Knell: “Of course settlements are seen as illegal under international law, although Israel disagrees with that. And the other complicating factor that we have to remember are [sic] these fresh signs of reconciliation between the two main Palestinian political factions; between Hamas and Fatah. Ehm…they’ve just said in the last week or so that they want to work towards a unity government; expected to have more on that and Hamas of course is seen by the US, by Israel, by the EU and others as being a terrorist group.”

In conclusion, listeners to this report ostensibly about a terror attack against Israelis did not hear the words terror or terrorist used in the BBC’s portrayal of the incident. Neither did they learn anything about the three people murdered other than their job descriptions and Yolande Knell carefully avoided narrative-conflicting topics such as the Palestinian Authority’s incitement to violence, glorification of terrorism and financial rewards to terrorists.