Despite the fact that it claims to take “a look at the ethical and religious issues of the week”, the October 1st edition of the BBC Radio 4 programme ‘Sunday‘ included an item purporting to examine the “impact of the Balfour Declaration on religious communities in the Middle East”.

Presenter Emily Buchanan introduced the segment (from 18:14 here) as follows: [emphasis in italics in the original, emphasis in bold added] 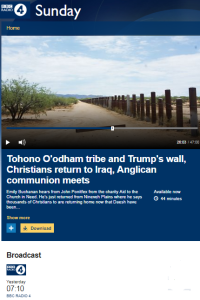 Buchanan: “This year marks the 100th anniversary of a letter that changed the face of Middle Eastern politics forever. The Balfour Declaration – written by Foreign Secretary Arthur Balfour in 1917 at a critical period in the First World War – expressed for the first time Britain’s commitment to a national homeland for the Jews. It paved the way for the creation of the State of Israel 30 years later but what effect did the declaration have on the religious make-up of the region? Trevor Barnes reports.”

Interestingly, neither Buchanan nor any of the five other people from whom listeners subsequently heard talking about this topic bothered to mention the event that was arguably more significant in ‘paving the way’ towards the creation of Israel – the San Remo Conference – and the resulting Mandate for Palestine.

Barnes: “Whether you celebrate the Balfour Declaration, merely commemorate it or actively fulminate against it depends on the political and religious position you take. Eugene Rogan: professor of Middle Eastern history at the University of Oxford.”

Rogan: “For anybody whose political aspirations are fulfilled by Zionism then obviously the Balfour Declaration was the essential first step in that direction. But for the Palestinian Arab people whose land was being promised away by the British government at the height of the First World War without their consent, without consultation, it’s been an unmitigated catastrophe from the outset.”

At the time that the Balfour Declaration was written the land concerned was of course under the control of the Ottoman Empire and had been for five hundred years. Subsequently that region came under British control during the First World War and later was declared mandate territory. Just last month the BBC acknowledged that the area was not ‘Palestinian land’ but nevertheless we see Eugene Rogan allowed to promote that myth again, even though Barnes went on to reference the Ottoman Empire in the very next sentence.

Barnes: “Precise figures are disputed but in 1917 in the last days of the Ottoman Empire, the region is reckoned to have comprised some 85% Muslim, around 10% Christian and 5% Jewish populations. Nicolas Pelham: Middle East correspondent at the Economist.”

Pelham: “It was a region that was remarkably heterogeneous. It had a predominance of Muslims but there were also large Christian communities and Jewish communities – largely sharing the same cities and towns and public space. There was no real distinct sort of Christian Quarter and Jewish Quarter and Muslim Quarter before the Balfour Declaration.”

The staggering inaccuracy of that latter claim from Nicolas Pelham is of course evident in maps such as those appearing in Sir Martin Gilbert’s Jerusalem Historical Atlas. 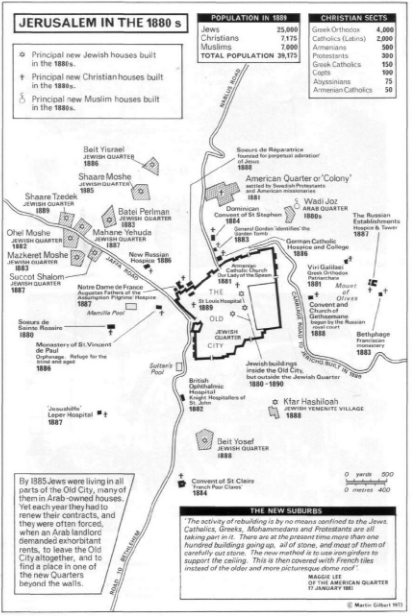 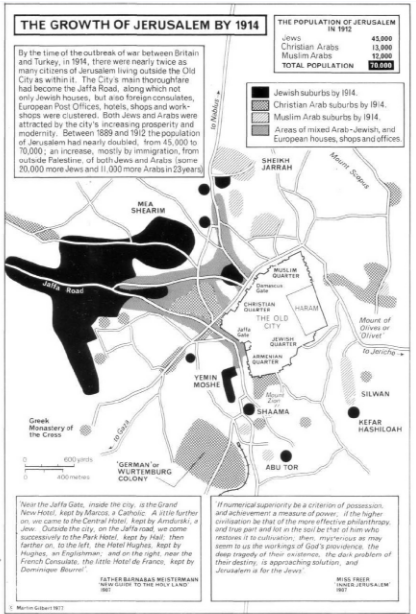 Barnes: “Relations, he says, if not always cordial were manageable in the main. Richard Verber: senior vice-president of the Board of Deputies of British Jews.”

Verber: “Pockets of friendship and, unfortunately, pockets of violence. On the other hand, Jewish and Muslim friendships is not a new concept. There were times – across Spain, across North Africa, across parts of the Middle East – where Jews and Muslims lived for decades – and in some places centuries – harmoniously.”

Barnes then made the historically inaccurate claim that it was the Balfour Declaration that brought that supposed ‘harmony’ to an end.

Barnes: “The Balfour Declaration altered that balance, promising favoured status to the Jews at a critical stage in the First World War when Britain was looking for allies; especially those who could help secure post-war influence in this strategically vital part of the world. Nicolas Pelham:”

Pelham: “I think one of the reasons that Britain was so interested in Jews was because – unlike the French and the Russians – they really didn’t have an indigenous community for which they could take responsibility. The French had Catholics and Maronites in the Middle East. The Russians had the Orthodox Church and Britain was really scraping around for a community that it could sponsor and wield influence through.”

The Anglican Church had in fact first begun to establish a presence in the Middle East almost a hundred years before the Balfour Declaration was written, with churches consecrated in Jerusalem and Nazareth in the 19th century and St George’s Cathedral in Jerusalem established as the centre of the diocese in 1898.

Barnes: “And Professor Rogan adds that the declaration came about not as a result of religious favouritism but solely in the context of the realities of war.”

Rogan: “I sympathise with the British government of the time in their willingness to promise anything to anyone who might be able to make a material difference in winning the war. The British government was neither pro-Arab nor pro-Zionist. It was pro-British Empire and its only objective in 1917 was to win the war.”

As will be seen in part two of this post, in the second part of this item the focus shifted from promotion of historical inaccuracy to blatant politicisation of its subject matter.

What does the BBC Academy teach the corporation’s journalists about Judaism?