The November 19th edition of the BBC Radio 4 religious affairs programme ‘Sunday‘ included an item described in its synopsis as follows:

“Madeline Davies from The Church Times tells Edward why the Greek Orthodox Church is selling it’s [sic] land in Israel.” 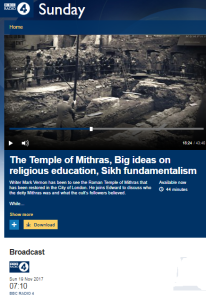 However, as listeners quickly found out, it in fact developed into a story about a draft bill currently awaiting debate in Israel’s Knesset.

Stourton: “In the holy land nothing stirs passions like the land itself. The Greek Patriarch of Jerusalem – Theophilos III – seems to be selling off an awful lot of it. Madeline Davies of the Church Times has been following the story and told me what’s happening.”

Davies: “The Greek Orthodox Patriarchy owns a large amount of land in Israel and it’s really the only source of income that the Patriarch has. They’ve got a lot of costs to cover and they have sold some land in order to cover those costs. There’s really a dispute over some of those sales; whether some of those sales were done with the full permission of the Greek Orthodox Patriarch and whether some of them were actually done without the approval of the church and should never have gone through.”

Stourton: “And why is it such a sensitive issue?”

Davies: “It’s really a question about the co-existence in Jerusalem. There’s a desire to ensure that the church is able to control its own land; to make its own decisions about whether it sells it and who to, or whether the government can really intervene in who owns land in the area.”

Stourton then promoted extremely partisan – and inaccurate – framing of the story:

Stourton: “So this to some extent is an issue of religious freedom; it’s about the Patriarch’s ability to act independently.”

Davies: “Yeah. There’s a lot of concern about a draft bill which is before the Israeli parliament which would give the Israeli government the power to confiscate land which the Patriarch has sold to third parties. That’s really one of the big concerns and concern has been expressed by other church leaders in the region about what that would mean for them as well. The bill wouldn’t just apply to the Greek Orthodox Church; it would apply to all churches in the region.”

Stourton: “The other issue for Christians, surely, is the risk that by selling off land the Patriarch diminishes the Christian presence in the holy land.”

Davies: “Yeah. So I think what the Patriarch is arguing is that they own quite a large amount of land and they’ve done this in a very planned and strategic way. They haven’t just flogged land sort of left, right and centre to cover their costs.”

Stourton: “Is everybody happy with that or are there some Christian groups who are…who are still concerned?”

Davies: “So he…ehm…the Patriarch is facing controversy within his own church. There’s particularly some Palestinians concerned land has been sold to Israelis by the church. I think what the Patriarch would argue is that land has also been used to build housing and residences for Palestinian Christians and so it’s not only that, sort of, land has been sold to one particular group.”

Listeners were not told that in fact there is criticism of the Patriarch from Palestinians on additional grounds:

Some of the demonstrators even called for an end to Greek patronage of the local Orthodox Church. But the Greek Orthodox Church has yet to show any signs of meeting these demands or deposing Theophilis.”

Stourton: “Some of the criticism is not just about the fact of the sale of land but the way he’s doing it.”

Davies: “In, I mean, in the past this land has been leased to Israelis for extremely low sums. And I think the idea is that to by either giving the lease to Israeli property developers or actually giving them the freehold, will actually generate a lot more income than those leases were and that that can really fund some of the core activities of the Greek Orthodox Church.”

Stourton: “Now he’s been here in this country talking to the Archbishop of Canterbury. How does he get wrapped up in all this?”

Davies: “Basically the Patriarch has gone on a tour to drum up support for his case. There’s a lot of concern about the Israeli government’s bill and he’s come over to the UK to try and get Justin Welby and other church leaders to support him and to issue a statement that really says we support the coexistence that exists within Israel and we support the church’s rights to control what it does with its own land.”

Stourton: “And did he get that?”

Davies: “Yeah, so both the Roman Catholic leader Vincent Nichols and Justin Welby have issued statements saying they want to support the status quo, which is really sort of a catch-all term that means we support the right of the church to control its own lands.”

With no effort made to inform listeners that Madeline Davies’ employer, the Church Times, is an Anglican publication Stourton continued:

Stourton: “And just returning to the bill in Jerusalem; is that something that the government there supports or is this an independent movement?”

Davies: “This has been brought by a number of parliamentarians but it’s unclear yet whether it will actually go through. I think there are concerns that it’s actually being used within coalition, sort of, politics with the government as sort of perhaps to appease certain groups. So it’s still unclear really whether it will go through.”

Stourton: “So he’s really in a very tight position isn’t he? On the one hand he’s facing criticism from – as you say – within his own church and from some other Christians about the whole land process and on the other side he’s under pressure from Israeli politicians.”

Davies: “Yeah. He’s in a really difficult position and I think that’s really why he’s trying to gather solidarity from Christians in the West just to try and say no; this is about more than just a property dispute. This is actually about the church’s rights in the region, their ability to coexist with other groups.”

So what is the story really about and did BBC Radio 4’s presentation of it give listeners an accurate and impartial view?

The story actually began some months ago when it emerged that the Greek Orthodox Church had sold tracts of land in Jerusalem to undisclosed buyers.

“The Greek Orthodox Church — the second biggest owner of land in Israel after the Israel Lands Authority — acquired some 4,500 dunams (1,110 acres) of real estate in the center of Jerusalem during the 19th century, primarily for agriculture. In the 1950s, just after Israel’s independence, it agreed to lease its land to the JNF for 99 years — with an option to extend. […]

Somehow, the church managed to secretly sign contracts — the first in 2011, and another in August 2016 — to sell the land to groups of companies about which very little is known […]

The deal came to light when the Greek Orthodox Church petitioned the Jerusalem District Court last week [July 2017] to have the Jerusalem City Council exempt it from payments relating to the 500 dunams it has sold off.”

The sale creates problems for the owners of properties located on that land.

“The deal has plunged more than 1,000 homeowners into uncertainty because they sublease the land on which their homes are built from KKL-JNF, which currently holds the primary leases. […]

“There is no doubt that the government of Israel cannot allow a situation in which veteran residents are at the mercy of a group of private investors (whose identity is not completely known), without any regulation of the matter,” A KKL-JNF spokesperson told The Times of Israel. […]

If the leases are not renewed when they run out in the early 2050s, the homeowners who have not sold by then risk being forced to leave, to pay potentially high prices to extend leases or even to rent their own homes. The prices of their homes have already been negatively affected.”

The bill inaccurately described by Davies in this item as being “the Israeli government’s bill” is in fact a private members bill proposed by MK Rachel Azaria – formerly the deputy mayor of Jerusalem.

“The main initiative to advance legislation to protect residents is being driven by lawmaker Rachel Azaria (Kulanu). Just before the start of the Knesset’s summer recess, she signed 40 MKs onto a private members’ bill to allow the state to confiscate land that has been sold. The confiscation would take effect from January 1, 2018, and the private investors would be compensated.”

Ms Azaria’s bill would mean that:

“…deals to sell the land would have to be approved by the Knesset’s Constitution, Law and Justice committee, that buyers would have to be Israeli citizens or Israeli-owned companies, that lease extensions would be dealt with by a national body, the cost of extensions would not be passed onto residents, and in cases where a national institution was not involved in a church land transaction, the state would use the tools at its disposal to protect the residents against losing their homes.”

Remarkably, the residents affected by the Greek Orthodox Church’s land sales in Jerusalem did not even get a mention in this BBC item. Obviously that serious omission is highly relevant because the bill currently awaiting reading in the Knesset which was widely discussed in the item is intended to protect those residents rather than – as claimed in this item – to “confiscate” land or “pressure” the church.

As we see, this report presented an entirely one-sided and distorted account of a story that was repeatedly portrayed as being solely about “the church’s rights in the region” and with absolutely no mention of the other side of the story and the rights of the people affected by the church’s actions. One might also question the timing of this story seeing as it actually broke several months ago but BBC audiences heard nothing about it until various church bodies began a PR campaign.

As for Edward Stourton’s claim that “religious freedom” includes real estate deals – that one will surely go down as one of the more ridiculous notions promoted by the BBC.