The BBC's narrative on a 'Palestinian capital in East Jerusalem' erases significant background.

Although the BBC has been telling its audiences that “the Palestinians want East Jerusalem to be the capital of a future Palestinian state” for many years, since the US president’s announcement of recognition of Jerusalem as Israel’s capital on December 6th 2017 that messaging has been promoted on a variety of BBC platforms on an almost daily basis.

BBC portrayals of the topic usually include the narrative seen in a frequently reused backgrounder on Jerusalem produced by Yolande Knell in which audiences were led to believe that a Palestinian capital in “east Jerusalem” is an already agreed component of the two-state solution rather than a topic to be discussed in final status negotiations.

And that’s part of the long-standing international formula for peace here, known as the “two-state solution”.

Knell also portrayed the two-state solution in terms that dovetail with the PLO’s interpretation of that term.

“Basically the idea that an independent Palestinian state would be created alongside Israel, along the boundaries that existed before 1967, it’s written up in UN resolutions.” [emphasis added]

Of course the prime motivation behind Palestinian claims to a capital in the parts of Jerusalem occupied by Jordan between 1948 and 1967 is control over Temple Mount but the BBC repeatedly fails to adequately clarify that important point to its audiences.

Neither does it bother to inform them of the Palestinian Authority’s record on upholding agreements it has already signed with Israel regarding other holy places.

Under the terms of the Oslo Accords, freedom of access to and worship at holy sites was guaranteed. 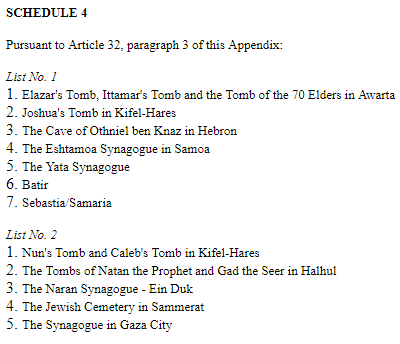 Obviously Israeli Jews are not able to visit the synagogue in Gaza City today and visits to additional sites on that list are either virtually impossible or severely restricted. Some of those holy and historically important sites have been vandalised, including Joseph’s Tomb which – as the BBC reported at the time – was set ablaze by Palestinian rioters in October 2015.

Holy places to which access is supposedly guaranteed by the Oslo Accords have also been the scene of numerous terror attacks and planned attacks – most recently on January 15th when an explosive device planted at the entrance to Joseph’s Tomb was discovered just before a visit by worshippers. That incident did not receive any BBC coverage whatsoever.

Some of the religious sites included in the Oslo Accords – Rachel’s Tomb and the Cave of Machpelah – have been the subject of motions instigated by the Palestinian Authority and passed by UNESCO that are designed to negate their Jewish heritage. Holy sites in Jerusalem have also been the subject of deliberately politicised UNESCO resolutions denying Jewish history.

Despite its public purpose obligation to provide audiences with “impartial news and information to help people understand and engage with the world around them” the BBC has not produced any content relating to the failure of the agreement that the Palestinians signed over two decades ago to guarantee freedom of access for Jews to religious sites under the control of the Palestinian Authority and to safeguard those sites.

However, the BBC’s copious multi-platform amplification of the simplistic narrative according to which a Palestinian capital in ‘East Jerusalem’ is the “formula for peace” continues apace.

Inaccuracy and omission in BBC backgrounder on Jerusalem