Listeners to BBC Radio Ulster heard an inaccurate description of the Western Wall.

Just over two years ago we noted that a video on the BBC Academy website that is presented to BBC journalists as a guide to Judaism includes several inaccuracies – including the claim that the Western Wall is:

“…the remains of the outer wall of the Jewish Second Temple, built by King Herod the Great.”

Unsurprisingly, that inaccurate claim continues to appear in BBC content from time to time and last year a BBC department rejected criticism of its description of the Western Wall as part of the Temple in a video for schools. 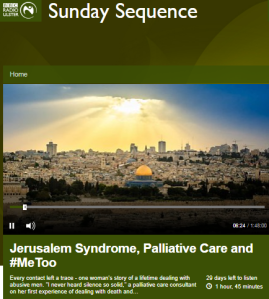 The January 28th edition of the BBC Radio Ulster “religious and ethical news” programme ‘Sunday Sequence‘ included an item (from 00:01 here) about ‘Jerusalem syndrome’ which was introduced by presenter Audrey Carville as follows:

Carville: “There are concerns that a County Down man missing in the north of Israel since late November may have been affected by what’s known as Jerusalem syndrome.”

In fact – as the BBC has previously accurately reported – the missing tourist was last known to be in southern Israel.

Towards the end of the discussion with the person brought in to explain ‘Jerusalem syndrome’ – Rev. Dr. Paul Bailey – listeners heard the following description of one case:

“…there was an example of a man trying to tear chunks out of the Western Wall of the Temple, believing himself to be Samson.”

Shortly after that Carville closed the item saying:

Carville: “Well Paul, you have educated us a lot this morning…”

Unfortunately for listeners to this BBC religious affairs programme, however, that ‘education’ once again included promotion of the inaccurate notion that the Western Wall is part of the Temple that was destroyed in 70CE.

What does the BBC Academy teach the corporation’s journalists about Judaism?

0 replies on “BBC misleads on Western Wall yet again”