The BBC knows the purpose of Hamas' cross-border tunnels yet avoids telling audiences in its own words.

On the morning of April 15th the IDF announced the destruction of yet another cross-border tunnel originating in the Gaza Strip.

“A military spokesman said the tunnel was dug by the Hamas terrorist group and was connected to a “kilometers-long” network of other passages under the Gaza Strip.

The tunnel reached “tens of meters” into Israeli territory in the area of the northern Gaza Strip, close to the Israeli community of Nahal Oz, the army said. It was constructed after the 50-day 2014 conflict between Israel and Hamas, according to the IDF. […]

Security forces had been monitoring this tunnel network, which had been under construction for years, the spokesman said. The decision was taken to destroy the tunnel once it crossed into Israeli territory, he added.

Palestinian tunnel diggers were working their way up to the surface to construct an exit within Israeli territory when the army decided to act.”

Later the same day the BBC News website published a report titled “Israel destroys ‘longest and deepest’ Gaza tunnel” in which the underground structure constructed for the purpose of infiltration of Israeli territory in order to carry out terror attacks was described as having been dug by “militants”. 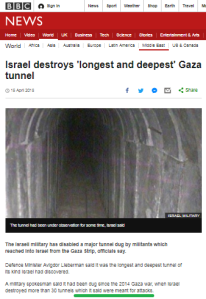 “The Israeli military has disabled a major tunnel dug by militants which reached into Israel from the Gaza Strip, officials say.”

The BBC avoided giving readers a clear and accurate description in its own words of the purpose of cross-border tunnels constructed by terror factions in the Gaza Strip:

“A military spokesman said it had been dug since the 2014 Gaza war, when Israel destroyed more than 30 tunnels which it said were meant for attacks.” [emphasis added]

Readers were not informed that during the summer 2014 conflict Hamas used cross border tunnels to infiltrate Israeli territory on four separate occasions in the space of twelve days.

The BBC’s reporting on the topic of tunnels at the time included twenty-three seconds from Lyse Doucet and a sixty-six second ‘backgrounder’ which made copious use of the ‘Israel says’ formula.

“It [Israel] has stated the tunnels pose a threat of terrorist attacks against the Israeli population.”

“Israel says tunnels like this are being used by militants to infiltrate its territory”. [emphasis added]

Just one July 2014 BBC News website report (from an outside contributor) gave audiences a clear view of the purpose of Hamas’ cross-border tunnels.

“After the failure of Hamas’ rocket forces to inflict significant damage on Israeli towns in November 2012, they decided to build a large offensive-tunnel capability that would enable them to infiltrate assault teams into Israeli villages within a few kilometres of the border or place large bombs underneath these villages.”

Since the summer 2014 conflict, what reporting there has been on the subject of efforts by Hamas and other terror groups to rebuild the network of cross-border tunnels has repeatedly avoided informing audiences of their purpose in the BBC’s own words.

In October 2017 the BBC’s report on a tunnel constructed by the Palestinian Islamic Jihad amplified that terror group’s propaganda regarding its purpose. In April 2016 the BBC employed the ‘Israel says’ formula when describing the intended purpose of a Hamas tunnel discovered in the southern part of the border region. In December 2017 the same terminology was seen again.

“…Israel said it had blown up a tunnel from Gaza, which it says was being dug to enable militant attacks” [emphasis added]

Despite that prevailing editorial policy, in January of this year one BBC presenter’s comments during an interview with a senior Hamas official indicated that the corporation is actually well aware of the purpose of those tunnels.

“…you’re not prepared – are you? – to give up your weapons based control of the Gaza Strip and your continued determination to fire rockets into Israel and dig tunnels under your territory into Israeli territory in order to conduct terrorist operations inside Israel.” [emphasis added]

Towards the end of the report readers were told that:

“It was the fifth Gaza tunnel to be destroyed by the Israeli military in recent months, Col [sic] Conricus said.

Some of the tunnels have been built by Palestinian militant group Islamic Jihad and others by Hamas, the Islamist group which controls Gaza.”

As was noted here last month when the BBC failed to report the discovery of another tunnel:

“…the BBC has ignored two of the four cross-border tunnels […] that have been destroyed during the past five months, barely mentioned a third and reported problematically on a fourth.”

Had it not ignored 50% of those stories, the BBC would have been able to inform its audiences that just one – rather than “some” – of the five cross border tunnels destroyed since late October 2017 was constructed by the Palestinian Islamic Jihad and that the other four belonged to Hamas.

Notably, this BBC report once again ignored the issue of Hamas’ diversion of construction materials and funds to the building of cross-border tunnels and as ever, BBC audiences heard nothing whatsoever about the Israeli civilians living adjacent to the border with the Gaza Strip who are under threat from such tunnels.

BBC News conceals part of a story on Hamas tunnels

BBC News report on Gaza tunnel equivocal about its purpose

Palestinian Islamic Jihad clarifies what the BBC did not

Another Hamas cross-border tunnel ignored by the BBC