Today is the start of the 101st Giro d’Italia cycling race with the first stage this year in Israel. It’s one of the biggest sporting events in Israel’s history. BBC sportwriter Tom Fordyce writes that the Giro “sells itself as the world’s toughest race in the world’s most beautiful place”. The BBC will be covering the race in detail but towards the end of his article yesterday Fordyce takes a nasty gratuitous swipe at the Jewish state by quoting the viciously anti-Israel Amnesty International which trolls Israel on a daily basis on social media: 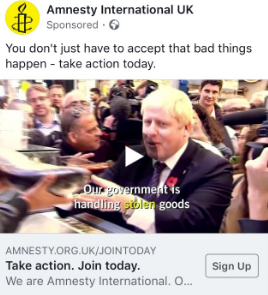 “Others see little more than a concerted effort to present an image of Israel to the world at odds with the reality. Amnesty International has accused Israel of trying to “sportwash” its reputation, as protests continue in the Gaza Strip that have so far led to the death of 35 Palestinian protestors.”

This is Amnesty that has staff who compare Israel to ISIS and who make jokes about MPs who just happen to be Jewish. And an Amnesty that invites lecturers to show a presumably fake photo of an Israeli soldier carving a Star of David onto the arm of a Palestinian child using a broken piece of glass.

It is quite incredible the amount of time and money Amnesty spends on demonising Israel and it’s an utter disgrace that the BBC quotes Amnesty as if Amnesty are an impartial observer. Amnesty are no more impartial than the Palestine Solidarity Campaign.

And from 14 – 20 May Amnesty will be staging yet another anti-Israel hatefest this time by sponsoring “a week-long festival of theatre, dance, films and talks commemorating the Palestinian experience of dispossession and loss of a homeland” at the Royal Academy of Dramatic Art (RADA).

One of the participants in this “commemoration” is Sana Moussa who is considered to have been born “in the Upper Galilee of occupied Palestine” and who “performed for the first time in Haifa on Thursday night at the Al Midan Theater, in an event organized by the Ghair Intaj group, which has organized a series of events in Palestine.”:

Haifa and the upper Galilee are obviously in Israel. Moussa seems to be an individual not in favour of promoting a two-state solution, but the end of the Jewish state.

The British Jewish community is sick and tired of the ignorance of the likes of Fordyce. In the local elections, where the results have just been announced, Britain’s tiny Jewish community has come out in force against Corbyn, the antisemitism inside the Labour Party and that party’s constant demonisation of Israel. This small community feels somewhat the same about the BBC and Amnesty.