How the BBC framed a story using photo captions.

On May 15th the BBC News website’s ‘In Pictures’ page published an item headlined “‘Hear our message’: Gaza border violence in pictures” which related to the previous day’s events and opened by telling audiences that: 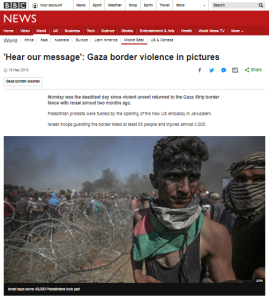 “Monday was the deadliest day since violent unrest returned to the Gaza Strip border fence with Israel almost two months ago.

Palestinian protests were fuelled by the opening of the new US embassy in Jerusalem.

Obviously “violent unrest” did not just appear out of the blue at the end of March: it was meticulously planned weeks in advance. BBC audiences have however been told nothing of what was organised, by whom, when and why and that means that the corporation can continue to promote false linkage between the pre-planned violence along the border and the relocation of the US embassy to an existing building in Jerusalem.

Notably, this item has not been updated to inform BBC audiences that 50 of the people killed on May 14th were – according to Hamas – linked to that terrorist organisation.

Scattered among the photographs are what the BBC describes at the bottom of the report as “witness interviews” gathered by “Reuters and AFP news agencies”. Notably, those ‘witnesses’ – identified only by their first name – tell only one side of the story.

“Many may get martyred today, but the world will hear our message. Occupation must end.

“Killing me will not change anything. They need to kill every last one of us to change the facts.

“I am happy that my son is a martyr. He is among dozens who died for the sake of Palestine.

Ibrahim, 50, whose son was killed near Gaza City”

Although all the photographs used in this item were sourced from various agencies, the BBC replaced their original captions with its own. Photo number one, for example, was originally captioned:

“Palestinians protesters pull barbed wire fence installed by Israeli army along the border during clashes after protests near the border with Israel in the east of Gaza Strip, May 14, 2018.”

The BBC replaced that description with:

“Palestinians protesters pulling barbed wire fence installed by Israeli army along the border during clashes after protests near the border with Israel in the east of Gaza Strip, 14 May 2018.”

The BBC replaced that with:

The original caption to the fourth photo read:

“An Israeli armoured personnel carrier (APC) maneuvers on the Israeli side of the border fence between Israel and the Gaza Strip May 14, 2018”

The BBC replaced that with:

In light of the BBC’s ongoing failure to inform its audiences about the multiple incidents of damage caused by ‘Great Return March‘ participants to the crops and irrigation systems of Israeli farmers in fields adjacent to the border, the change made to one caption is particularly noteworthy.

The BBC’s caption to the eighth image is:

However, that photograph was originally captioned:

“Israeli soldiers walk amidst smoke from a fire in a wheat field near the Kibbutz of Nahal Oz, along the border with the Gaza Strip, which was caused by incendiaries tied to kites flown by Palestinian protesters from across the border, May 14, 2018.”

In other words, the BBC elected to remove that brief reference to the story of millions of shekels-worth of deliberate damage caused by rioters along the Gaza Strip border in recent weeks.

Once again the narrative – or “our message” as it is described in this item’s title – that the BBC intends to communicate to its audiences is amply clear.