On May 15th the BBC News website published a backgrounder titled “Why Nakba is the Palestinians’ most sombre day, in 100 and 300 words“. 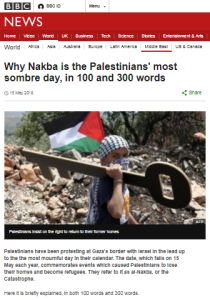 “Palestinians have been protesting at Gaza’s border with Israel in the lead up to the the [sic] most mournful day in their calendar. The date, which falls on 15 May each year, commemorates events which caused Palestinians to lose their homes and become refugees. They refer to it as al-Nakba, or the Catastrophe.

Why the BBC thought its audiences needed a double helping of explanations was not explained.

In the 100 word version BBC audiences were told that:

“On 14 May 1948, Israel declared independence, and in a war which began the next day, up to 750,000 Palestinians who had lived on that land fled or were expelled from their homes.”

“The Nakba stems from the Arab-Israeli war which began on 15 May, 1948 – the day after Israel declared independence when British control of the land, known as Mandate Palestine, was about to end.

Most of the Arabs who lived in the area which became Israel fled or were expelled by Israeli forces in the 1948-49 war, and hundreds of thousands were freshly displaced by Arab-Israeli fighting in the West Bank and Gaza Strip in June, 1967.”

As we see, according to both those accounts the displacement of Palestinians only began after Israel declared independence and the sole entity cited as being responsible for that displacement is “Israeli forces”.

Obviously both those accounts erase from audience view the fact that hostilities – and with them displacement of civilians – had in fact begun five and a half months earlier. The BBC’s portrayals make no mention of Arab rejection of the recommendations of the November 1947 UN Partition Plan, immediately after which Arab rioting ensued and Arab forces launched what the UN described at the time as “armed incursions” into what was then still Mandate Palestine.

In other words, the BBC has chosen to present Palestinians as totally passive victims, airbrushing the fact that their displacement came about after Arab leaders elected – at their own admittance – to launch hostilities.

“The UN blamed the Arabs for the violence. The UN Palestine Commission was never permitted by the Arabs or British to go to Palestine to implement the resolution. On February 16, 1948, the Commission reported to the Security Council:

‘Powerful Arab interests, both inside and outside Palestine, are defying the resolution of the General Assembly and are engaged in a deliberate effort to alter by force the settlement envisaged therein.’

The Arabs were blunt in taking responsibility for starting the war. Jamal Husseini told the Security Council on April 16, 1948:

‘The representative of the Jewish Agency told us yesterday that they were not the attackers, that the Arabs had begun the fighting. We did not deny this. We told the whole world that we were going to fight.’

‘Early in January, the first detachments of the Arab Liberation Army began to infiltrate into Palestine from Syria. Some came through Jordan and even through Amman . . . They were in reality to strike the first blow in the ruin of the Arabs of Palestine.'”

As our CAMERA colleague Gilead Ini has noted, the displacement of Palestinians did not take place – as the BBC would have its audiences believe – only after Israel declared independence on May 14th 1948. [emphasis added]

“Most broadly, the Arab flight can be divided into two time periods corresponding with the two major phases of fighting. Roughly half of those fleeing did so between November 1947 (when Palestinian Arabs responded to the United Nations partition recommendation with anti-Jewish violence) and May 1948 (when the armies of Egypt, Jordan, Syria, Iraq and Lebanon invaded Palestine). During this period, the conflict more closely resembled a civil war, with Palestinian Jews battling Palestinian Arabs and several thousand Arab militiamen. A second phase of the fighting and flight occurred after May 1948, when neighboring Arab armies initiated the conventional phase of the war by joining in the fighting on the side of the Palestinians.

Some commentators divide the Palestinian exodus into three or four somewhat shorter waves. One prominent example of the ‘four wave’ characterization refers to 1) the flight of the Palestinian elite between November 1947 and March 1948; 2) a flight coinciding with the shift by the Jewish Haganah militia from defensive to offensive operations in April 1948 and lasting until a truce in June of that year; 3) the period between July, when that truce expired, and October, when a second truce ended; and lastly, 4) the period from October through November 1948.”

Notably, the BBC’s account erased all mention of the part played by the Palestinian Arab leadership in the displacement. As Gilead Ini writes:

“The Palestinian leadership and elite set an example for the rest of society by evacuating their towns and villages early during the conflict, usually long before fighting neared their towns, and some even before the civil war began. (Or as commander of the Arab Legion John Bagot Glubb put it, “villages were frequently abandoned even before they were threatened by the progress of war.”) This behavior not only shattered the morale of the Palestinian masses, but also, in the words of historian Shabtai Teveth, “amounted to clear — albeit unwritten — instructions to flee Palestine.”

The British High Commissioner for Palestine at the time, General Sir Alan Cunningham, described this phenomenon and its effect on the general population:

‘You should know that the collapsing Arab morale in Palestine is in some measure due to the increasing tendency of those who should be leading them to leave the country. For instance in Jaffa the Mayor went on 4 days leave 12 days ago and has not returned, and half the National Committee has left. In Haifa the Arab members of the municipality left some time ago; the two leaders of the Arab Liberation Army left actually during the recent battle. Now the Chief Arab Magistrate has left. In all parts of the country the [elite] effendi class has been evacuating in large numbers over a considerable period and the tempo is increasing.’

Another British official, Palestine’s Chief Secretary Sir Henry Gurney, wrote that “It is pathetic to see how the [Jaffa] Arabs have been deserted by their leaders.”

After Haifa’s chief Arab magistrate abandoned that city, a British intelligence report described the act as “probably the greatest factor in the demoralization of Haifa’s community.””

The BBC’s accounts likewise erased the subject of Palestinian leaders’ instructions to flee.

“Palestinian leaders also explicitly instructed Palestinians to leave their homes. The Grand Mufti of Jerusalem, Haj Amin al Husseini, told a delegation of Haifa Arabs in January 1948 that they should “remove the women and children from the danger areas in order to reduce the number of casualties,” and continued to encourage evacuations in the months that followed. Indeed, just a few months later, when Haifa’s British, Jewish and Arab leadership were working to negotiate a truce, the Arab side, in line with the Mufti’s orders but to the great surprise of everyone involved, insisted on a complete evacuation of all Arab residents.

Similarly, the national Palestinian leadership (or “Arab Higher Committee”) published a pamphlet in March 1948 urging the evacuation of women, children and the elderly from areas affected by the fighting. The local Palestinian leadership (or “National Committee”) in Jerusalem heeded this call, ordering Jerusalem Arabs to evacuate these populations, and asserting that those who resisted doing so would be seen as “an obstacle to the Holy War” and as “hamper[ing]” the actions of the Arab fighters.

Jordan’s Arab Legion ordered women and children out of Beisan, a town near the Jordanian border and an anticipated point of invasion by the Legion.

Similar scenes played out in dozens of Arab villages across the land.

Some villagers were not merely instructed to leave, but actually expelled by Arab militiamen from outside the country who feared local Arabs might ally themselves with the Jews, or who wanted to use the residents’ homes for lodging.”

In the 100 word version BBC audiences were told that:

“There are around five million Palestinians currently recognised as refugees by the UN. Most live in Jordan, followed by the Gaza Strip, West Bank, Syria, Lebanon and East Jerusalem.”

In the longer version the same topic was presented as follows:

“Today some five million Palestinians are registered by the UN as refugees. Most live in Jordan, followed by the Gaza Strip, West Bank, Syria, Lebanon, and East Jerusalem.

In neither of the two versions were BBC audiences told why Palestinians still live in refugee camps, why they are kept in refugee status seven decades on rather than being resettled, or of the political background to their inherited refugee status.

“The right of return is a key demand of Palestinians and their leaders. They base their claim on a United Nations General Assembly resolution, which was passed in 1948.

The resolution says “refugees wishing to return to their homes and live at peace with their neighbours should be permitted to do so at the earliest practicable date”.”

The BBC did not bother to explain to audiences that UN GA Resolution 194 is non-binding, that it does not specifically relate to Palestinian refugees (despite long-standing BBC claims to that effect) and that it does not – contrary to often heard assertions – grant any unconditional ‘right of return’. Neither does the BBC bother to inform readers of the fact that the Arab states voted against that UN GA resolution.

The longer version went on to state:

“Israel says it cannot allow five million refugees to return because this would overwhelm the country of 8.5 million and mean the end of its existence as a Jewish state.”

The shorter version made do with “but Israel says it would be overwhelmed”.

The fact that the intention of the Palestinian demand for ‘right of return’ is to bring about the end of the Jewish state – as Israelis rightly recognise – was not clarified to BBC audiences.

The BBC did not tell its audiences who wrote this backgrounder but whichever BBC journalist did so, it is blatantly obvious that he or she had no intention whatsoever of providing audiences with the full range of historical background and factual information which would enhance their understanding of the issue.

Instead, the BBC’s funding public got a double dose of promotion of a one-sided political narrative in which Palestinians are exclusively portrayed as totally passive victims and all mention of the responsibility of the Arab leaders who rejected the 1947 Partition Plan and subsequently started the war that led to their displacement is missing.