As we saw in part one of this post, the May 20th edition of the BBC Radio Ulster “religious and ethical news” programme ‘Sunday Sequence‘ included a long item (from 34:04 here and also aired on BBC Radio Foyle) supposedly about the state of the ‘peace process’ after the May 14th chapter of the ‘Great Return March’ publicity stunt on the border between the Gaza Strip and Israel. 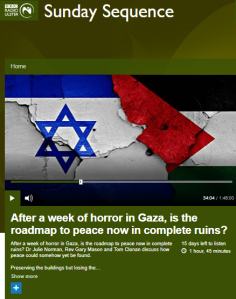 “After a week of horror in Gaza, is the roadmap to peace now in complete ruins? Dr Julie Norman, Rev Gary Mason and Tom Clonan discuss how peace could somehow yet be found.”

After listeners had heard Tom Clonan’s inaccurate account of Operation Grapes of Wrath – and been led to believe that Israel was essentially to blame for the 9/11 terror attacks – and Julie Norman’s concealment of the fact that the overwhelming majority of those killed on May 14th were males in their twenties and thirties, presenter Roisin McAuley (once again exaggerating the significance of the Palestinian-Israeli conflict) asked guest Gary Mason:

[39:01] “Now, given that situation, Gary, intractability, the importance for all of us of finding a way out of this absolute morass, where do you begin?”

Mason’s response [from 39:13] included the predictable – yet invalid – claim that it is possible to use the Good Friday Agreement as a template for solving the Palestinian-Israeli conflict. Picking up on Mason’s reference to “the role of civic society” in peacemaking, Julie Norman then inaccurately claimed that violent actions such as the ‘Great Return March’ or the rioting in Bili’in are grassroots peace initiatives.

[42:47] Norman: “…but what you see with the kind of protests at the border, what you see with weekly demonstrations against the separation barrier – these are activists and people who refuse to give in to that despair and who are trying to take some kind of action despite the odds and despite the limitations of the larger political reality…”

Following some echo-chamber agreement between Mason and McAuley with regard to the US administration’s role in solving the conflict – and the claim that the opening of the US embassy in Jerusalem was “a real slap in the face to Palestinians” – the presenter continued:

Clonan: “I would strongly hope that the European Union would step up to the plate and begin to impose sanctions and trade embargoes on Israel. And I certainly think individually as nations we could begin by boycotting the Eurovision Song Contest next year. And I say that with great regret because I’m on the record…I’ve written to all of the newspapers in the [Irish] Republic repeatedly over the years saying that we should not boycott Israel. But unfortunately of late Israel has been behaving like a rogue state and should be treated as pariah by the international community. I mean there was a great deal of unanimity of condemnation, quite rightly, of a chemical attack – or a suspected chemical attack – on civilians in the suburbs of Damascus. We also expelled diplomats on suspicion of a chemical weapon attack in Salisbury which injured – seriously injured – two people. Now we need to have that same level of unanimity when it comes to Israel’s actions this week.”

Following some reminiscing from Clonan about the Irish peace process, McAuley revisited his BDS messaging while again promoting her own pet ‘most important thing in the world’ theme.

[48:54] McAuley: “What you’re underlining, Tom, is the importance of this for the region and indeed for the wider world. But are you seriously suggesting that in some way that boycotting a song festival would make any difference at all? I mean why not try to seriously engage with Israel and with everybody on this?”

Clonan: “Israel isn’t interested in engagement just now. I think they feel that their military or their use of force has been rewarded and their behaviour has deteriorated somewhat. I think unfortunately that the situation with Iran – the US withdrawing from the Iran nuclear deal at a point where you have youth unemployment in Iran at 60%, where 90% of those arrested in recent civil unrest are under 25 – there’s a youth bulge in Iran that threatens to destabilise the old guard, the ageing Ayatollah. President Rouhani’s government, you know, they’ve managed with considerable pushback to get the Iran deal. I think there’s a sense – and this is what I’m being told by my contacts amongst the international defence and international community – that Israel, the United States and their Gulf state allies detect a last moment of weakness in…within Iran as Shia ascendency reaches its zenith in the region.“

What all that has to do with the item’s professed subject matter is of course as clear as mud. McAuley however chose to continue the ‘youth bulge’ theme.

While acknowledging a “very high youth demographic in Palestine“, Norman responded that she would not equate that with destabilisation.

Norman: “Whether it’s Iran or Palestine, I don’t think we need to fear the youth bulge.”

McAuley then claimed that “eventually, in Israel and the occupied territories as a whole, there will be more Palestinians than there are Israelis”. Norman’s answer to that included the claim that:

[49:22] Norman: “…Israel is wielding power in very violent ways as we saw on Monday and throughout the past several weeks. And it’s not just numbers when one group is living under occupation.”

The fact that Israel disengaged from the Gaza Strip 13 years ago of course did not get a mention at all in this entire item.

At 50:06 Gary Mason raised the topic of the role of women in making peace, stating that he is a member of the advisory board of an Israeli organisation called ‘Women Wage Peace’. He did not however bother to inform listeners that the group’s activities have been:

“…denounced by Hamas in an official statement, as well as by the Palestinian branch of the international Boycott, Divestment and Sanctions (BDS) campaign, both of which accused Palestinians participating in the initiative of “normalizing” relations with Israel.”

Again ignoring the Israeli disengagement from the Gaza Strip and parts of Samaria in 2005, Mason went on to say that Israelis “may have to give up land for peace […] and we just need, I think, to bring that concept into it…”. Listeners were next treated to Mason’s home-grown psychological analysis of “the Israelis”.

In response to McAuley’s question [53:30] “from where can hope come?” Julie Norman again promoted the inaccurate notion that there are Palestinian civil society groups working for peace. Tom Clonan’s reply to the same question [54:15] included the following:

Clonan: “…essentially this is Semitic peoples killing Semitic…Arabs are a Semitic people. And I think with Benjamin Netanyahu and Donald Trump you see the very essence of patriarchal thought which has led to so much destruction in the Middle East over the last two decades and if civil society, religious leaders and other leaders in society and women can be a part of the key to this solution to this, that would be wonderful because I don’t see a solution in the unilateral military intervention strategies that we’ve had post 2001 and 9/11 unfortunately.”

Notably, no-one in the studio bothered to question Clonan’s omission of Hamas from his list of those guilty of “patriarchal thought”.

At 56:33 – after Mason had again invoked the Northern Ireland comparison and claimed that people with a “military background” could also contribute to peacemaking, McAuley came up with the following bizarre claims:

McAuley: “I know that Peace Now – the big Israeli movement for peace and defence of the Palestinians and sitting down in front of tanks and so on that are about to destroy houses – that was founded by veterans of the 1948 war who had driven their tanks into Israel to take the land.”

Where those tanks had supposedly been driven from was not clarified to listeners before Clonan jumped in with a plug for yet another political NGO.

[56:58] Clonan: “And the Breaking the Silence movement as well: you know Israeli serving and ex-serving military. And I mean even from my own experience I mean I had my epiphany in the Middle East […] and to just witness man’s inhumanity to man and I mean it was only after becoming a parent myself that I was able to put my experiences into context. It was only after I buried my own little daughter that I understood what it was like for those Lebanese men, women and children to suffer in that way. And the Israelis in the settlement towns of Sderot and on the border that were being attacked by Hizballah indiscriminately. […] The constant disinhibited [sic], indiscriminate use of force at the moment, I think with that they’re sowing the seeds of their own destruction and what Israel needs in the Middle East is friends. And what better friends to have than the Lebanese, Syrians, Palestinians. It is possible but we need imagination, we need leadership.”

The item closed soon after that. Only then, after nearly twenty-five minutes of hopelessly uninformed – and often downright ignorant – discussion, were listeners told that:

[58:56] McAuley: “The Israeli government response to the events on Monday was that the military actions were in keeping with Israeli and international law. They asserted that the demonstrations along the border were – quote – part of the conflict between the Hamas terrorist organisation and Israel. The military’s open fire orders, they said, were therefore subject to international humanitarian law – also known as the law of armed conflict – rather than international human rights law.”

Clearly this long item cannot possibly have contributed to audience understanding of the professed story and its context, riddled as it was with gross inaccuracies, deliberate distortions and important omissions – and not least the important issue of Hamas terrorism. The repeated inappropriate comparisons to the Northern Ireland conflict likewise detracted from listeners’ understanding of the background to the topic supposedly under discussion and the one-sided claims and comments from contributors and presenter alike – including promotion of the anti-Israel BDS campaign – are ample evidence that the prime aim of this item was to promote a specific political narrative.

Inaccuracy, omission and oddity in a BBC Radio Ulster item on Israel – part one

0 replies on “Inaccuracy, omission and oddity in a BBC Radio Ulster item on Israel – part two”