The BBC's ECU has ruled that Marr's claim that "lots of Palestinian kids" were killed by Israeli forces breaches editorial standards.

Readers may recall that back in April the BBC’s Andrew Marr managed to shoehorn Israel into a discussion about the Syrian regime’s use of chemical weapons. 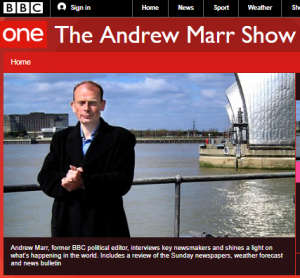 During the papers review in the April 8th edition of ‘The Andrew Marr Show’ show guest journalist Julia Hartley-Brewer spoke about a Guardian report on the previous evening’s chemical weapons attack on civilians in Douma in Syria, stating:

Hartley-Brewer: “We’ve got to stop the nonsense that they’re not using chemical weapons. They are using them. And of course I would say I do think we need to remember that it was our country that chose not to get involved even after chemical weapons attacks as a result of votes in Parliament led by former Labour leader Ed Miliband.”

The “light” Andrew Marr then chose to shine on the issue of international inaction despite repeated chemical weapons attacks in Syria was as follows:

Marr: “And the Middle East is aflame again. I mean there’s lots of Palestinian kids being killed further south as well by the Israeli forces.”

As the Daily Mail reports:

“Anti-semitism campaigner Jonathan Sacerdoti complained, writing: ‘When talking about a story on the use of chemical weapons in Syria, Andrew Marr for some reason decided to talk about Israel (which was unrelated anyway). He stated there’s a lot of Palestinian kids being killed further south by Israeli forces.

‘This is completely incorrect and is made up. This was irrelevant to the conversation on Syria… and also actually completely false.’

BBC producers initially tried to defend Marr’s comments by pointing to the fact that five ‘younger people’ had been killed between the beginning of the year and the date of the programme.

They also said several Palestinian children and younger people were killed in the week following the broadcast, but Mr Sacerdoti argued that later events could not be used to justify Mr Marr’s comments.

His complaint has been upheld.”

The relevant part of the ECU’s response stated:

Note the BBC’s use of a WHO document (which is based on figures supplied by the same terror group that organised the violent rioting) as a source of information concerning “a large number of children injured” even though Marr’s comment referred to “Palestinian kids being killed”.