30% of the BBC's second 'White Helmets' article in two days is devoted to promotion of Assad's propaganda.

As noted here previously, on the morning of July 22nd the BBC News website published a report about the evacuation of members of the ‘White Helmets’ and their families from Syria in which unfounded propaganda put out by the Assad regime, the Russian government and their sympathisers was amplified.

“In that report BBC audiences were told that:

“The White Helmets describe themselves as a volunteer workforce that acts to save people in Syria’s war zones.

They say they are non-partisan but supporters of President Bashar al-Assad, and his ally Russia, allege links to jihadist groups.”

And again, in a sub-section headed “Who are the White Helmets?”:

That propaganda has indeed been vigorously promoted by the Assad regime, Russia and their sympathisers. However, it has also been exposed and debunked – as the Guardian reported in December 2017.”

Apparently not content with that dose of unquestioning promotion of the propaganda of a brutal regime that has slaughtered hundreds of thousands of its own civilians, on the afternoon of July 23rd the BBC News website published a follow-up report currently titled “Syria White Helmets evacuation criticised by government” in which 30% of the word count was given over to further amplification of disinformation from the heart of the Assad regime. 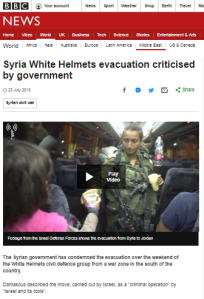 “The Syrian government has condemned the evacuation over the weekend of the White Helmets civil defence group from a war zone in the south of the country.

Damascus described the move, carried out by Israel, as a “criminal operation” by “Israel and its tools”. […]

Responding to the move on Monday, Syria’s foreign ministry said that “words of condemnation are not enough to denounce this despicable act”.

It added that the White Helmets supported “terrorists” and that the world had been warned of the group’s “dangers”, according to Syria’s state news agency Sana.

Syrian President Bashar al-Assad’s administration regards the White Helmets as agents of Western powers. His supporters, and his Russian allies, say the volunteers support the rebels and also have links to jihadist groups. […]

But Syria’s government and its ally Russia have accused the group of links to jihadist groups.

The article ‘balanced’ those claims with the following 34 words:

“But Mr Assad’s opponents see them as heroes for their rescue work in bombed, rebel-held cities.

The White Helmets describe themselves as a volunteer workforce that acts to save people in Syria’s war zones.”

Readers were not informed of the research – including by BBC Trending – which has shown how conspiracy theories concerning the ‘White Helmets’ have been spread.

Another notable aspect of the report was its knee-jerk use of the BBC’s favoured ‘Israel says’ formula:

“The Israel Defense Forces (IDF) said they were acting on a request from the US, the UK and other European nations.”

Seeing as by the time this article was published officials from the UK, the US, Canada and Germany had acknowledged their countries’ role in the operation’s organisation, the BBC’s use of the phrase “the Israel Defense Forces said” is obviously superfluous.

As we have had cause to note here all too often in the past, the BBC’s ‘public purposes’ oblige it to provide accurate and impartial “news and information to help people understand and engage with the world around them”.

Members of the BBC’s funding public may well be asking themselves why – yet again – their public service broadcaster is generously amplifying conspiracy theories no different from those put out by the regime controlled news agencies of Syria and Russia.