A serialised dramatisation of a book on Radio 4 gives a different account of an event than described by the same author four years ago on the same station.

The BBC Radio 4 programme ‘Book of the Week’ is described as:

Last week’s five episodes featured a book titled “Where the Line is Drawn” by Raja Shehadeh. 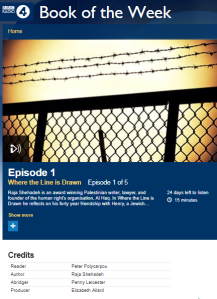 “Raja Shehadeh is an award winning Palestinian writer, lawyer, and founder of the human right’s [sic] organisation, Al Haq. In Where the Line is Drawn he reflects on his forty year friendship with Henry, a Jewish Israeli. As idealistic young men when they first meet in 1977, they connect over shared interests in literature, writing and walking. As the years pass, their friendship is challenged by history, politics, enmity and violence, but it also points the way to a common future. Raja Shehadeh’s books include Occupation Diaries; Language of War, Language of Peace and Palestinian Walks which won the 2008 Orwell Prize. He has contributed to The New York Times, The Guardian and Granta.”

“Raja Shehadeh, the award winning Palestinian writer, lawyer, and founder of the human rights organisation, Al Haq, visits Jaffa, the city from which his father was exiled during the Nakba in 1948 when 750,000 were forced from their homes with the end of the British Mandate and the creation of Israel. It’s now 1978 and he is staying with Jewish friends who moved into one of the old Arab houses in Jaffa. He is curious about their choice of home.”

“Raja Shehadeh, the award winning Palestinian writer, lawyer, and founder of the human rights organisation, Al Haq receives shocking news and he comes to a new understanding about the value of his friendship with Henry. He also reflects on the controversial killing of a young Palestinian attacker by a teenage Israeli soldier who was later jailed for manslaughter.”

Although the NGO ‘Al Haq’ is mentioned in each and every one of those five synopses, BBC Radio 4 audiences were given no information about the political agenda of that so-called “human rights organisation” or its alleged ties to a terror group.

Despite the frequent references to “illegal occupation” and “occupied territories”, no proper historic context was provided to listeners throughout the entire series. In episode one listeners were told that “Israelis…in 1967 had taken the West Bank, including East Jerusalem, from Jordan” without any mention of the fact that Jordan illegally occupied those areas for 19 years.

Listeners to episode one heard a partisan description of the circumstances in which Palestinians including Shehadeh’s father – also a lawyer – left their homes which left them with the inaccurate impression that they were universally “forced out”.

“In 1948 during the Nakba, where around 750,000 Palestinians were forced out of their homes with the establishment of Israel, he lost his practice, his home, and all his properties. And he had to start all over again in Ramallah.”

In episode two listeners heard a reference to Jaffa as “my father’s city from which he was exiled” and were again told that in 1948:

“…with the end of the British Mandate and the establishment of Israel, around 750,000 Palestinians were forced out of their homes. The Palestinians who managed to stay were placed in the Ajami quarter surrounded by barbed wire. It was like a ghetto.”

Listeners also heard that in 1967 “I drove with my parents to visit the city they had been forced to leave 19 years earlier.”

Notably, when Raja Shehadeh appeared on BBC Radio 4’s ‘Desert Island Discs’ in 2014, he told a rather different version of that story: a version in which his parents were not “forced to leave” Jaffa but decided to relocate to their second home.

“Jaffa it’s very hot and humid in the summer and so they had a summer-house in Ramallah. When hostilities began they decided it’s safer in Ramallah because it was getting rather dangerous actually – physically dangerous – so they decided, towards the end of April, to take that short drive down to Ramallah – short drive from Jaffa – and my father always thought that if the worst happens – that is the partition – Jaffa was going to be on the Arab side so they will always be able to go back. And they took very few things with them and they were never able to go back.”

Throughout the five episodes listeners heard Israelis described as “settlers” (regardless of their place of residence in Israel) and “colonisers”. Notably, all the Israeli voices in the dramatisation were done in a bizarre quasi-American accent – regardless of where they were born – which implied that they were ‘foreigners’. In episode two listeners heard the story of Shehadeh’s visit to a plant nursery in which he asked how the owner – described as a woman from Canada – “could establish her nursery on land expropriated from villagers who were now forced to live in crowded refugee camps with no land to cultivate for themselves” and accused her of ‘exploiting’ the land.

Listeners also heard a context-free account of the beginning of the second Intifada – described as “futile” rather than wrong – and justification of terrorism:

“Israel was fighting for the retention of this land. We were fighting to end the occupation in accordance with international law which gave us the right to resist.” [episode three]

“…the human and political issues that led these young men to brutally kill themselves, and others, in despair.”

In episode three listeners were told that Shehadeh’s father had been “murdered…by a collaborator working for Israel” even though it was later admitted that “no-one was ever charged”.

In episode five listeners heard the wave of Palestinian terrorism which began in the autumn of 2015 described thus:

“This uprising was different. There was no unified leadership guiding these young men and women. They had no political platform or concrete demands. They simply improvised ways of resisting. Some of these were non-violent, others violent involving the stabbing of not only soldiers but also innocent Israelis. The Israeli government responded with violence, defining all resistance as terrorism.”

Also in episode five listeners heard a long section relating to an incident in Hebron in March 2016 which was inaccurately portrayed as having begun when:

“Abdul Fattah al Sharif, 21, from the occupied old city of Hebron lay on the ground shot after he allegedly tried to stab an Israeli soldier.” [emphasis added]

As the BBC’s own reports on that incident show, the words “allegedly” and “tried to” are completely superfluous and materially misleading.

“Sharif and another 21-year-old Palestinian, Ramzi Aziz al-Qasrawi, had stabbed and wounded an Israeli soldier before troops opened fire on them, wounding Sharif and killing Qasrawi.”

There is of course much more on which to comment in these 75 minutes of entirely one-sided stories which completely erase Palestinian agency and responsibility and prompted Sunday Times journalist Rod Liddle to write to the BBC.

“A nice man called Andrew in the BBC Press Office is kind enough to send me a list of stuff the corporation is doing each week. […]

I have never replied to Andrew’s email, but I did last week because I had been listening to the book that Radio 4 was serialising. Here’s what I wrote:

Many thanks for your weekly bulletins about what the BBC is up to. I wonder if you could answer my inquiry below, or pass it on to someone who can.

Here’s the thing. I am hugely enjoying the serialisation on Radio 4 of the Palestinian writer Raja Shehadeh’s entertaining book, How My People Were Robbed, Murdered and Crushed by the Vile Occupying Fascist Israeli State. I may have got the title slightly wrong, for which apologies. I was wondering if the BBC intended, at any point, to serialise a book that might give a contrary point of view on this disputatious issue — perhaps by an Israeli?

All the best,
Rod

I got a friendly acknowledgment from Andrew — and later a two-line reply from the BBC, stating that the corporation’s coverage is impartial. Mr Shehadeh has spent most of his life railing against Israel and Jews, while claiming to be a moderate. And his book is serialised by Radio 4. Of course, it will not serialise a book by an Israeli to provide the political balance that the corporation is duty bound to strive for (even if, frankly, it doesn’t strive terribly hard).”

That just about sums it up.

0 replies on “Serialised propaganda, omission and inaccuracy on BBC R4’s ‘Book of the Week’”