The BBC’s newsreader refrained from informing listeners who carried out the missile fire mentioned in his chronologically reversed portrayal of the story. [emphasis in bold added, emphasis in italics in the original]

Newsreader: “Israel has carried out a dozen airstrikes on targets in Gaza in response to the firing of around 36 missiles into Israel. One Palestinian man was killed. The Israelis said at least three people were wounded inside Israel. Yesterday two fighters from Hamas, which controls Gaza, were killed by Israeli fire. From Jerusalem, Yolande Knell reports.”

By the time that news bulletin went on air (02:00 Israel time), over 70 projectiles had been launched from the Gaza Strip. In other words, Radio 4 news reduced the number of attacks on Israeli civilian targets by half. Notably too, the report presented a Palestinian casualty as fact (without telling listeners that he was a Hamas operative) while presenting Israeli wounded using the “Israel says” caveat. Unnecessary qualification was also evident in Yoland Knell’s report. 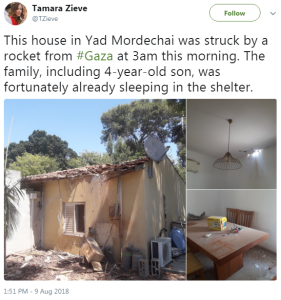 Knell: “Israel’s military says that its fighter jets targeted sites across Gaza that were used by Palestinian militants to build tunnels for attacks, to make rockets and for logistics. Earlier, Israeli television broadcast pictures of a house and cars said to have been damaged when two rockets hit the town of Sderot. Several other missiles were intercepted by Israel’s aerial defence system and most landed in open areas. Hamas had warned that Israel would pay for an attack one day ago which killed two of its militants. An Israeli tank fired at a Gaza watchtower after soldiers believed gunshots had been aimed at them. Palestinian and Israeli media later reported that the gunfire had actually been part of a Hamas training exercise. The latest violence follows reports that progress had been made in talks mediated by the UN and Egypt to try to achieve a lasting ceasefire between Israel and Hamas.”

Notably, while she did use Hamas’ own terminology to describe its threats of retaliation, Yolande Knell did not clarify to BBC audiences that the terror group was attacking exclusively civilian targets.

Eight hours later, Radio 4 listeners were again given an inaccurate picture of the number of missile attacks against Israeli civilians in the station’s 8 a.m. news bulletin (from 02:06:11 here) read by Chris Aldridge during the August 9th edition of the ‘Today’ programme.

Aldridge: “The Palestinian authorities say three people, including an 18 month-old girl, have been killed in a series of airstrikes on the Gaza Strip by Israeli warplanes. The Israeli army said it was targeting what it called ‘terror sites’ in the Palestinian territory in response to three dozen rockets fired into Israel.”

Four hours before Aldridge read that news bulletin the number of missile attacks launched against Israeli civilians since the previous evening was already over 150. In other words, the BBC concealed over 75% of the attacks that actually took place – and 100% of the Israeli civilians injured by them – from audience view. As we see, the ministry of health run by the terror group launching those missiles was inaccurately portrayed as “the Palestinian authorities”: terminology which listeners used to hearing about ‘the Palestinian Authority’ no doubt found very confusing.

Remarkably, although that news bulletin was aired after the BBC News website had amended a problematic context-free headline, Radio 4 also chose to present the story to its audiences in reverse chronology.