BBC Monitoring is taking on 'fake news': so how is its own record?

On November 1st the BBC put out the following Tweet: 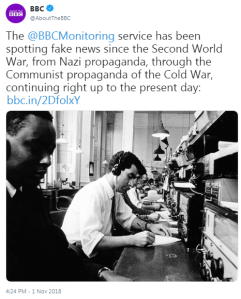 “BBC Monitoring is a specialist part of BBC News, part of the World Service group. We have experienced journalists and linguists who follow and track international media in foreign languages, in over 150 countries and about 100 languages.

We monitor that information, we report and analyse it, and we work on a subscription website basis. All our content is available to the BBC and to the UK Government and we also have commercial customers. […]

BBC Monitoring was set up to counter propaganda from Nazi Germany in the war, explaining propaganda and spotting messaging in media. Verification – and then the reporting of stories where fake news is part of the media, is still part of what we do.

I’m pleased that the World Service is pulling together all its coverage of fake news. Monitoring is a central part of that, and we’re also developing a small team that is solely going to be dedicated to disinformation and the manipulation of messaging in the media in certain parts of the world.”

However, past stories produced by BBC Monitoring have themselves not always been free from “disinformation and the manipulation of messaging”.

BBC WS airbrushes terror out of a story about Palestinian prisoners

Dumbing down ME politics with BBC Monitoring

BBC Monitoring digs up the dirt with cleaners non-story

A service announcement for BBC Monitoring

Let’s hope that the first of those “certain parts of the world” will be BBC Monitoring’s own new offices in Broadcasting House.