Bucha, a Ukrainian suburb northwest of Kyiv, has become a synonym for horror following the discovery of over 400 bodies in a mass grave in the town in the aftermath of six weeks of Russian occupation in which civilians – including children – were reportedly subjected to torture, rape and summary execution by soldiers.  This adds to the thousands of Ukrainian civilians killed since Vladimir Putin launched an unprovoked invasion of the country on Feb. 24th.

The Guardian published a cartoon about the massacre based on a now iconic image, which you can see in the bottom right photo in this tweet.

This is the Ukrainian city — Bucha, after being deoccupied. Dead bodies of civilians with hands tied and bullet holes in their heads from behind. This is 2022. Is it fascism or genocide? What's this? Europe, USA, how did we let this happen? pic.twitter.com/6PQRjslANZ 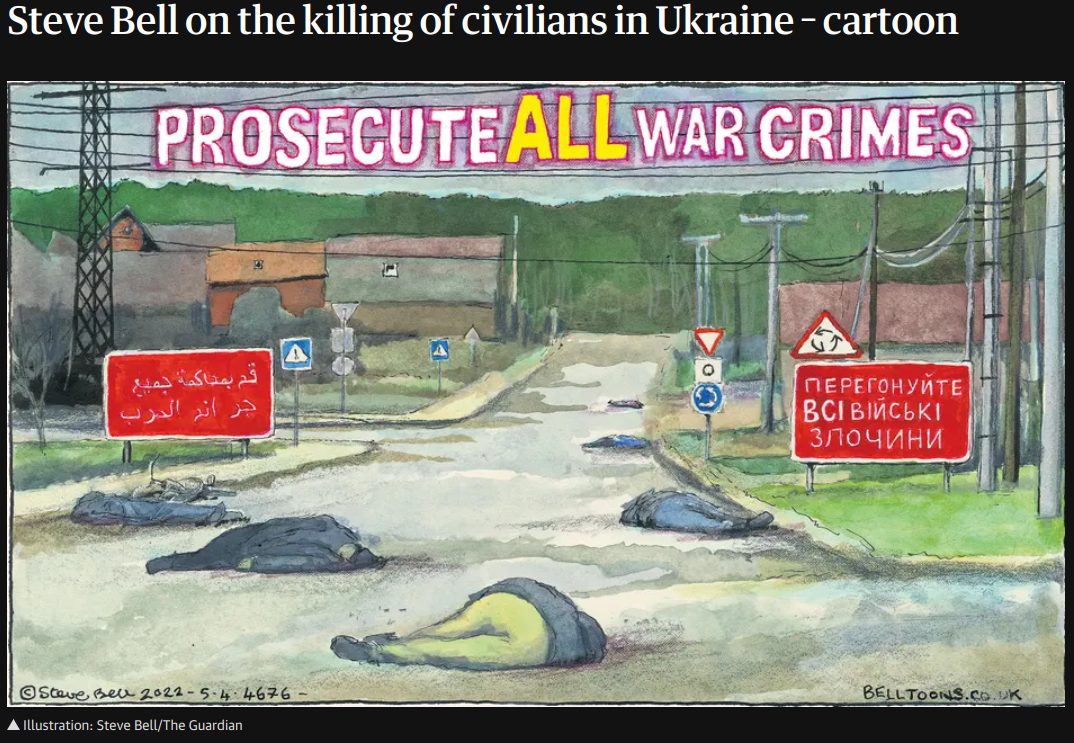 On the right, the sign in Ukrainian, reads: Prosecute the entire Russian army for war crimes.  (Translated by CAMERA staff)

On the left, the sign in Arabic – consistent with Bell’s own English title – reads: Prosecute ALL war crimes. (Translated by CAMERA Arabic)

So, Bell appears to be ‘All Lives Matter’-ing the slaughtered Ukrainians in Bucha.

We can infer this from his cartoon, as well as from his March 17th retweet of a tweet by conspiracy theorist John Pilger of an article by Diana Johnston (who’s notorious for denying the Bosnian genocide) that Bell blames the West, particularly NATO aggression, for Russia’s decision to invade Ukraine and for the campaign to ‘demonise’ Vladimir Putin.  Indeed, Bell’s body of work in over four decades at the Guardian, has often revealed a knee-jerk, Corbyn-style contempt for not only Israel, but for the West more broadly, which he believes is guilty of oppressing communities of colour and displaying hypocrisy when condemning atrocities around the world.

Turning to the Arabic sign ‘Prosecute ALL war crimes’ in Bell’s cartoon about the Bucha massacre, it seems there are two possible explanations for his decision to add the sign in Arabic.  First, he could be drawing attention, broadly, to what he believes are far less covered atrocities in Arabic speaking/Muslim countries – which would be consistent with some commentary in the British media that has argued that racism explains the world’s ‘disproportionate’ focus on the suffering of (white) Ukrainians.

The other explanation – the one we lean towards – is that he’s specifically drawing attention to what he believes are the “war crimes” committed by Israel against Palestinians.  Certainly, Bell’s malign obsession with Israel, that has sometimes crossed the line to antisemitism, would be consistent with a scenarios in which he sees dead Ukrainians, but immediately thinks of Jews.

We can’t, of course, can’t read Bell’s mind.  However, it’s quite possible that Bell, who often denies the existence of antisemitism whilst simultaneously peddling that very racism, and is among those who believes ‘you’re not allowed to criticise Israel’ while working at one of the largest purveyors of anti-Israel hatred, read the condemnations of Russian brutality in Bucha and couldn’t help but brood over the absence of animosity towards the Jewish state.