On December 7th a report about events at the previous day’s session at the UN General Assembly was published on the BBC News website’s Middle East page under the headline “Vote condemning Hamas for firing rockets into Israel fails at UN“. 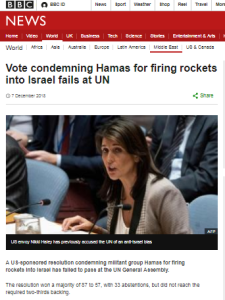 As noted here previously, had it been passed that US drafted resolution would have marked the UNGA’s first ever condemnation of missile attacks against Israeli civilians by Hamas and other Gaza Strip based terror groups.

The words ‘civilians’ and ‘civilian’ appear five times in the text of that draft resolution – twice in relation to the effects of Hamas’ policies on the population of the Gaza Strip. Nevertheless, the BBC’s portrayal of the draft resolution made no mention of the civilians who are the targets of the rockets fired “into Israel”.

“A US-sponsored resolution condemning militant group Hamas for firing rockets into Israel has failed to pass at the UN General Assembly.”

An equally whitewashed portrayal of the launching of military grade projectiles at civilian populations was found later on in the report.

“Last month saw a flare-up of violence between Israel and Palestinian militants in Gaza. Hundreds of rockets were fired into Israel, with Israeli aircraft hitting scores of militant targets in response.” [emphasis added]

“The resolution won a majority of 87 to 57, with 33 abstentions, but did not reach the required two-thirds backing.”

“A vote to require a two-thirds majority was narrowly backed by 75 to 72, with 26 abstentions.

Israeli Ambassador to the UN Danny Danon said the resolution had been hijacked by this procedural decision.”

BBC audiences were not however informed that the request for a vote to apply the two‑thirds majority rule – described by one experienced commentator as “a rarely used rule of procedure” – came from “Kuwait, speaking on behalf of the Arab Group”.

While readers were told nothing of the intense campaign which Hamas had conducted before the vote or of the involvement of the PLO and Palestinian Authority in trying to defeat the draft resolution, they were informed of post-vote comments from a Hamas spokesman and an Iranian representative. The PA president’s reaction, however, went unreported by the BBC.

“Palestinian Authority President Mahmoud Abbas also welcomed the result, despite being engaged in a bitter intra-Palestinian rivalry with Hamas over control of Gaza. “The presidency thanked all the states that voted against the American draft resolution, affirming that it will not allow for the condemnation of the Palestinian national struggle,” a statement from the PA’s Wafa mouthpiece read.”

Refraining from clarifying to readers that any electoral mandate secured by Hamas in elections nearly 13 years ago is no longer valid, the BBC’s report amplifies a view of a terror organisation responsible for the murders of hundreds of civilians as “legitimate”.

“Hamas, or its military wing, is designated as a terrorist organisation by Israel, the US, EU, and UK, as well as other powers.

Its supporters see it as a legitimate resistance movement which came to power through elections, last held in 2006.”

The violent coup which brought the Gaza Strip under the control of Hamas is completely whitewashed from the BBC’s account: “…Hamas, the militant group that has ruled the Gaza Strip since 2007…”

Clearly this BBC report fails to provide readers with the full background essential for complete understanding of why and how this proposed UNGA resolution condemning terrorism against a civilian population was scuppered.