At the beginning of the BBC Radio 4 ‘Today’ programme’s live broadcast from the Gaza Strip on December 17th (available here) listeners were told by presenter Mishal Husain that she had “been talking to people on both sides of the divide”. Husain later informed listeners that: [emphasis in italics in the original, emphasis in bold added] 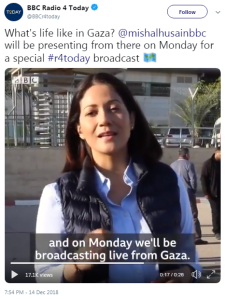 Husain: “Well we’re going to be hearing throughout the programme this morning not from politicians but from individuals and families experiencing the reality both of Gaza and of life in southern Israel…”

As we have seen in previous posts (see ‘related articles’ below), with the exception of a few unattributed sound-bites scattered through the broadcast, in the first half of the three-hour programme listeners did not hear from those ‘ordinary’ people but from three officials from international organisations who all presented a remarkably homogeneous view.

At 1:34:15 listeners heard Husain introduce “a group of young Israelis living in the Gaza periphery” – but not before they had heard yet another typically airbrushed portrayal of the nearly nine months of violent rioting which has taken place along the border between Israel and the Gaza Strip.

Husain: “This is now the ninth month in which Palestinians have gathered on Fridays at various points along the Gaza side of the perimeter fence that separates it from southern Israel. They say they’re protesting for their rights and against the blockade of Gaza. Israel says Hamas has organised the protests as a cover for attacks.”

The fact that Hamas (along with other terror groups) has been central in the organisation and facilitation of the ‘Great Return March’ events has of course been in the public domain since before they began. However, as regular readers know, the BBC has serially refrained from providing its audiences with that information and for the past nine months BBC audiences have seen violent rioting sanitised as ‘protests’ and ‘peaceful demonstrations’ despite the terror attacks and border infiltrations that have taken place – and with the fact that a significant number of those killed or injured had links to terror groups airbrushed from BBC accounts.

Husain went on to make a typically superficial mention of what her interviewees have been experiencing, using a frequently seen BBC formulation according to which rockets are mysteriously “fired from Gaza” by parties the BBC refuses to name and at targets similarly left undefined. The response to those rockets is however described in precise terms.

Husain: “People on the Israeli side, especially the closest rural communities, have seen fires on the land set off by incendiary kites and balloons. And they live with the wider reality of tension flaring up between Israel and Hamas; rockets fired from Gaza, Israel striking targets within it. I’ve been speaking to a group of young Israelis living in the Gaza periphery to get their personal perspective on the conflict, what’s been happening this year and the way in which Israel seeks to protect them.”

Husain’s conversation with that group of 16 to 23 year olds began with questions relating to their experiences.

Husain: “Do you all know as you look around here – we’re sitting outside a café – do you all know where the closest safe place is?”

However after three questions, Husain’s interest in the personal experiences of her young interviewees apparently waned.

Husain: “How much do you know about what life is like on the other side of the fence in Gaza?”

Husain: “If there were Palestinians here from Gaza they would say that the Israeli blockade is why they live in the conditions they do. If they were able to say that to you directly, how would you respond?”

Husain: “In the process of the last few months there have been people who’ve been shot, wounded, even killed a long distance inside the fence, inside Gaza. What do you think when you hear about those injuries and deaths?”

Husain: “Can any of you imagine or hope for a different kind of future or do you think that this is going to be the reality in this part of Israel for the foreseeable future?”

Husain: “Those Palestinians who protested peacefully as part of what they call the Great Return March, you know some of them are the descendants of families that in 1948 ended up in Gaza. What do you think of them demanding their right to return or calling for their rights to be recognised?”

When asked by one of her interviewees “what do you mean by peacefully?”, Husain responded “People who’ve been inside the fence. They haven’t thrown stones or rocks, who’ve been part of peaceful protests.”

Husain: “I want to ask you how much interaction any of you or each of you have had with Palestinians. I know it depends on probably where exactly you’ve grown up but have any of you had Palestinian friends or colleagues or people you’ve been in college with?”

In summary, out of ten main questions posed by Husain, three related to the personal experiences of her interviewees regarding daily security threats, one was a general question about the “future” and six related to Palestinians – mostly those in the Gaza Strip.

Later on in the programme (from 2:40:34) Husain interviewed a group of five Gaza Strip residents between the ages of 20 and 28 and the focus of her questions was notably different. 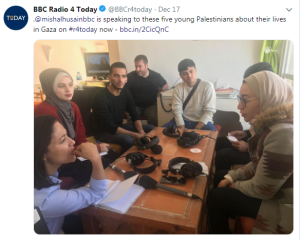 Husain: “What would you want, Hala, the outside world to know about what life is like here for someone your age?”

Husain: “And Abdul Rahma, I know that you are looking for work. What is it that you want to do and why is it so difficult?”

Husain: “And you know when I talk to Israeli officials and to civilians, they’ll say that [restrictions on movement] is necessary because of their security and…ahm…they would say that you’re in this position because of Hamas. In fact one Israeli woman said to me that people like you, everyone here, is a captive of Hamas as they feel they are.”

Husain: “I want to ask you about what this year has been like and really this is the ninth month that there have been protests at the fence. It’s not very far from here. I’ve seen one day there for myself. I wonder what you think of that…of those protests and whether they are achieving anything.”

Husain: “More than 170 Palestinians have been killed during the protests…Israel regards them as disturbances led by Hamas but there are many people who’ve been…thousands of people who’ve been injured including nearly six thousand people with bullet wounds according to the health ministry here in Gaza. Nimer, what do you think of what’s been happening there?”

Husain: “But I want to ask all of you, because you are just at the start of your lives, whether you think things are going to change here. Whether you have any hope that you will be able to find work or to, you know, to reach your full potential.”

Husain: “You mentioned Hala I think earlier the divisions within Palestinians. I mean the fact is that the Palestinian Authority – the leadership in the West Bank – has had sanctions on Hamas and that has also affected incomes here. Is there hope of resolving that?”

Husain: “Nimer, do you think the next ten years could be better than the last ten during which you’ve grown up?”

Husain: “A final thought Abdul Rahman; what would you say to young Israelis on the other side?”

As we see Husain’s nine main questions to the group in Gaza included two questions relating to the future, two about Hamas and/or the PA, four about personal experiences and opinions and just one about “Israelis on the other side”.

Notably Husain failed to challenge statements made by her interviewees regarding “the Israeli occupation” and “the siege” – neither of which exists in the Gaza Strip. When one of the speakers alleged that he had seen Israel ‘kidnap’ Palestinians at the fence “by force”, Husain’s reaction was “Well I mean I should say that Israel regards everything that is happening close to the fence as a threat to its security”. And when the final speaker complained that Israeli politicians are “still looking at Gaza as they are terrorists”, Husain had no comment to make.

That, by the way, was the sole mention of the word ‘terrorists’ throughout the entire seventy-five minutes of Mishal Husain’s BBC Radio 4 broadcast from the Gaza Strip.

One to listen out for tomorrow on BBC Radio 4

Mishal Husain does ‘life in Gaza’ for BBC One TV