“HARDtalk’s Stephen Sackur speaks to Pinchas Goldschmidt, Chief Rabbi of Moscow and president of the Conference of European Rabbis. There is plenty of disturbing data pointing to a significant rise in overt anti-Semitism in Europe and the United States but why? How should the Jewish community respond? And how much reassurance and protection is being offered to Jews whose past has so often been written in blood? Is rising anti-Semitism a symptom of a liberal democratic order that is starting to crumble?”

A similar synopsis was presented in an audio version of the programme aired on BBC World Service radio on January 11th.

While the first part of the programme largely stuck to some of the subject matter presented in that synopsis, from around the middle of the interview presenter Stephen Sackur shifted the focus of the discussion, beginning by questioning whether opposition to the existence of the Jewish state is antisemitism. [emphasis in italics in the original, emphasis in bold added]

[14:07] Sackur: “Interesting you put it in the historical context throughout this interview. I felt from you a consciousness not just of the present but of the past in Europe and what has happened to Jews in the past. And it’s interesting that the former Chief Rabbi in Britain, Jonathan Sacks, he said, you know, ‘in the Middle Ages Jews were persecuted because of their religion, in the 19th and 20th centuries they were reviled because of their race and today in the 21st century Jews are attacked because of the existence of their nation-state, Israel’. Do you feel that Israel has now become front and centre in ways in which people who have antisemitic intent are now using the Israel issue to get at the Jewish people?”

Pointing out that not everyone who criticises Israel is an antisemite, Rabbi Goldschmidt went on:

Goldschmidt: “However, if you go and you delegitimise Israel […] and you say that every people in the world have a right to a nation-state besides the Jews, so that’s also another form of politically correct antisemitism which…”

Sackur [interrupts] “Is it? It’s anti-Israel and its government and its policies in occupied territory but is it antisemitism?”

Sackur – who is apparently embarrassingly unaware that the IHRA working definition of antisemitism adopted by his own government categorises “Denying the Jewish people their right to self-determination” as a form of antisemitism – next moved on to the topic of the leader of the British Labour party.

[15:44] Sackur: “When you observe in Britain the fall-out between the Jewish community and the leader of the main opposition party in the United Kingdom – Jeremy Corbyn, leader of the Labour party – with clear overt allegations from the Jewish establishment that Jeremy Corbyn has aided and abetted antisemitism, do you worry about the degree to which there is now this gulf between one of the main political parties and the Jewish community in Britain?”

When Rabbi Goldschmidt stated that the meaning of security for Jews is that they would fare equally well regardless of which political party was elected Sackur interjected:

[16:51] Sackur: “Well only if you’re suggesting to me that Jeremy Corbyn’s Labour party is an existential threat to the future of the Jewish community in Britain. Are you seriously saying that?”

Goldschmidt: “I think that the British Jewish community is the best to answer that. However I’ve seen the turbulence….”

Sackur [interrupts] “Let us remember that despite all of the allegations about Jeremy Corbyn and his actions in the past and his words in the past, Jeremy Corbyn insists that throughout his political career he has been a fighter against, an enemy of all forms of racism including, he always says, antisemitism.”

The remainder of the programme saw Sackur focus somewhat obsessively on one political figure who is of course unconnected to the supposed topic of the programme, beginning with employment of the ‘some people I’m not going to name say’ tactic.

[17:54] Sackur: “You see some observers of this debate and this argument and this rift that has developed see a fundamental hypocrisy amongst many Jewish people because while they castigate Jeremy Corbyn for some of his associations in the past, they look across the water to Israel, to the leader of Israel prime minister Binyamin Netanyahu who just recently hosted for five days of warmth and friendship prime minister Viktor Orban of Hungary who has long associations with far right elements including antisemitic elements in Hungary. Also they see Binyamin Netanyahu making a point of journeying all the way to Brazil to declare his friendship, alliance and partnership with the new president of Brazil, Mr Bolsonaro, who has a record – a long record – of making statements which are deeply troubling in terms of his attitude to minorities, to gay people, to women. Where’s the consistency here?”

The Hungarian prime minister’s July 2018 visit to Israel in fact lasted two days rather than five as inaccurately claimed by Sackur, who predictably had nothing to say about the representatives of 59 additional counties who attended the recent inauguration of Brazil’s new president.

When Rabbi Goldschmidt pointed out that British Jews do not vote for the prime minister of Israel Sackur interrupted him again:

Sackur: “But nobody’s accusing Binyamin Netanyahu of antisemitism because he develops a very warm friendship with Viktor Orban, who many Jews regard as deeply dangerous to the future of Jewish communities in Europe.”

Sackur did not provide any evidence for his claim of “a very warm friendship” between the prime ministers of Israel and Hungary and did not clarify whether or not he believes that, by the same standard, the British prime minister should be criticised for hosting the Saudi Arabian Crown Prince last year.

Interrupting his guest yet again, Sackur pursued his point:

[20:04] Sackur: “…let me ask you a very blunt question. What do you – as the chief of the Conference of European Rabbis – what do you think of Binyamin Netanyahu cosying up to Viktor Orban and the leadership in Poland, both of which have very troubling attitudes to many Jews in Europe?”

Goldschmidt: “I think that…”

Sackur [interrupts] “Just tell me what you think.” 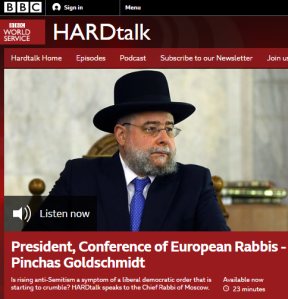 [20:55] Sackur: “Just a final thought and it involves your personal life as well. You’ve made a life for the last 3 decades in Russia and actually the position for Jews in Russia appears on the face of it to have improved over the last 30 years. I dare say you’ve been involved in that. Binyamin Netanyahu – again quoting him – when there are serious, horrible terror attacks which involve Jewish people being killed in Europe, he always says to the Jews of – in this case I’m quoting France but the Jews of Europe – he says ‘listen, Israel isn’t just the place in whose direction you pray; the State of Israel is your home and Israel is waiting for you with open arms’. As a European Jew who’s made a life in Russia, do you think it is wise and helpful for the Israeli prime minister to constantly tell Jews that ultimately, by implication, the only safe place for Jews is in Israel?”

Failing to listen to Rabbi Goldschmidt’s answer – which included clarification of the importance of the existence of Israel “to all Jews” – Sackur interrupted him again.

Sackur: “I’m not sure you’re answering my specific point. Is it your perspective that Israel is ultimately the only safe place – truly safe place – for the Jewish people?”

This programme could have provided BBC audiences – both domestic and international – with some insight into the issue of antisemitism in Europe and how the Jewish minority living on the continent perceives its future.

Unfortunately, Stephen Sackur’s often aggressive focus on getting his own points across – including promotion of the notion that anti-Zionism is not antisemitism, defending Jeremy Corbyn, downplaying the fears of British Jews and his bizarre but long-held obsession with the current Israeli prime minister – meant that viewers and listeners lost a good deal of the opportunity to hear from one of the better informed voices on those issues.