As we saw in part one of this post, a BBC Arabic feature titled “Hebron: One street, two sides” included eight short videos which were largely taken from two much longer films made in Hebron. 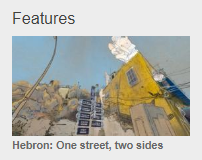 The credits to both films mention BBC Arabic’s documentaries editor Christopher Mitchell – once in that capacity and once as ‘executive producer’. Both films are credited to Tom Roberts and one names Israel Goldvicht as its producer. Roberts and Goldvicht have previously collaborated on a number of projects relating to Israel.

The first of the two films is titled “Hebron: A War of the Narrative”.

“In a two-part investigation BBC Arabic goes deep inside the divided city of Hebron in the West Bank, the only place where Palestinian residents live alongside Jewish settlers. This first film reveals the world of one of the most controversial communities in Israel – the settlers of Hebron.

The holy city of Hebron is the most divided in the West Bank, the only place where Palestinian residents live cheek by jowl with Jewish settlers. It’s a scene of raw tensions and countless killings. Jews have lived in Hebron almost continuously for 4,000 years, enduring periods of repression and violence. But the settler community is little known outside Israel and widely stigmatised; to many, they’re a byword for fanaticism and stubbornness. Their mission is to re-establish a lasting Jewish community in the city, and – as this film shows – their mood is changing. Optimism is replacing the gloom. Today’s settlers are convinced they’re winning the struggle to stay, and that history is now on their side; violent incidents are on the wane, the government openly supports the expansion of settlements, and the US has recognised Jerusalem as capital of Israel.

Hebron’s settlers are busy delivering this new message of permanence and immovability to the hundreds of thousands of visitors who come to the city. This film, with its unique access to key individuals driving the new narrative, goes deep into the settlers’ world. Yet, under the surface, there’s disharmony amongst the voices emanating from the settlement. We meet Israelis who criticize the settlement because of its military domination of the Palestinians, and others who believe that Palestinians will never be real partners for peace – or even accept their presence in Hebron.”

The film’s ”Israelis who criticise the settlement” is in fact the spokesman of the foreign funded political NGO ‘Breaking the Silence’. Other than that viewers are presented with a monochrome portrait of extremist ‘settlers’, some of whom are identified not only by name but with the film-makers’ own labels such as “the agitator” or “the activist”.

The second film is titled “Hebron Exposed: A Weapon of Life”.

“In a two-part investigation BBC Arabic goes deep inside the divided city of Hebron in the West Bank, the only place where Palestinian residents live alongside Jewish settlers. This second film follows a unique project in which Palestinian teenagers are taught how to use video cameras to capture suspected abuses of human rights in the streets around them.

The holy city of Hebron is the most divided in the West Bank, the only place where Palestinian residents live among Jewish settlers. It’s a scene of raw tensions and countless killings. In March 2016 human rights activist Emad Abushamsiya filmed the shooting of a wounded Palestinian by the Israeli soldier Elor Azaria. The video went viral, landing Azaria with a manslaughter conviction and turning Abushamsiya into a figure of hate for the Israeli right. As this film shows, he received dozens of death threats, his house was firebombed and he was harassed continually. The pressure became too much for his eldest son, splitting the family apart.

Abushamsiya’s response was to assert the importance of non-violent resistance and the necessity of submitting to the rule of law. He formed a group called the Palestinian Human Rights Defenders and began training a group of local teenage activists, some as young as 12, to use video cameras in order to document alleged human rights abuses. His ultimate ambition – to alter the course of the Israeli occupation – may or may not be realised, but as this film shows, the video camera has given him and his young trainees a new sense of power and purpose. We follow Abushamsiya as he prepares his team for the intense reality of confronting violence with video cameras. The film includes several extended examples of their work, revealing the hostility between the two communities with rare immediacy.”

Like that synopsis, the film itself presents Palestinian residents of Hebron as peace-loving individuals engaged in “non-violent resistance”. Viewers are not informed that the aim of ‘Palestinian Human Rights Defenders’ is – according to their own Facebook page – to secure the “Removal of all illegal Israeli settlements from Hebron” by means of a campaign they call “Dismantle the Ghetto, take the settlers out of Hebron”.At no point during the 51 and a half-minute film are any of the PHRD interviewees asked how their alleged concern for ‘human rights’ aligns with their campaign for the ethnic cleansing of Jews from Hebron.

In contrast to the first film’s portrayal of ‘extremist settlers’, viewers of the second film are not told of the PHRD’s support for the BDS campaign, its use of extremist language such as ‘apartheid’ and ‘colonisation’ or its whitewashing of terrorism.

At no point during the 51 and a half-minute film are any of the PHRD interviewees asked how their alleged concern for ‘human rights’ aligns with their campaign for the ethnic cleansing of Jews from Hebron.

In two different showcased examples of PHRD filming, the BBC’s ‘documentary’ promotes the falsehood that Israeli soldiers planted knives next to Palestinians in order to frame them as terrorists. The aim of that falsehood is to promote the notion of ‘extra-judicial killings’.

The two main protagonists in this film are PHRD founder Emad Abu Shamsiya (with viewers not told that he spent several years in prison) and Zidan Sharabati. No mention is made of both those men’s links to the political NGO B’tselem and specifically its ‘camera project’ which has also included Palestinian political activists such as the Tamimi family. At no point are viewers informed of the origins of PHRD’s funding.

Notably the BBC commissioned film crew did not interview any Palestinians involved in terror attacks against Israelis in Hebron or any members of that city’s armed factions and so the story told in these two ‘documentaries’ is one of extremist settlers and non-violent Palestinian victims protected only by children carrying video cameras.

In other words the BBC did not try to give audiences an accurate and impartial picture of the “two sides” of the story of Hebron but rather framed that story in a manner conducive to the amplification of its chosen political narrative.