'Today' presenter fails to unpack his interviewees sophism on antisemitism.

Robinson: “Compare and contrast the following reactions to the resignations of nine Labour MPs in the past week alone. ‘There is now brutality in the Labour party. Racist bullies are responsible for driving one – Luciana Berger – out of the party and it needs to change if more are not to follow.’ That was the reaction of the party’s deputy leader Tom Watson. In contrast: ‘there is no place for harshness and bullying in the party and to tell you the truth, I don’t believe it exists on a wide scale’. That was the response of the leader Jeremy Corbyn. So who is right? And how can the party’s divisions on bullying, on antisemitism and indeed over Europe now be bridged?”

Robinson discussed that topic with two labour MPs – the first of whom he introduced as “Chris Williamson, Labour MP for Derby North, a vocal supporter of Jeremy Corbyn”. However – despite the BBC’s obligation to provide “…news, current affairs and factual programming of the highest editorial standards so that all audiences can engage fully with issues…” and notwithstanding Robinson’s challenges to some of his interviewee’s talking points – the interview quickly descended into an esoteric conversation that most listeners would have had great difficulty following.

Robinson: “Chris […] what would you say is the scale of bullying and scale of antisemitism in the Labour party?

Williamson: “Well I’ve never witnessed any bullying and – I’ve got to say like Chuka Umunna – never seen any examples of antisemitism. That’s not to say that neither of those things exist but the truth is that the Labour party has a proud tradition of standing up for social justice, fighting racism in all its forms, right back from the early 1930s when we stood – the Labour party – with the Jewish community in Cable Street against Oswald Mosely’s fascists, to being the backbone of the anti-Nazi League in the 1970s.”

Robinson: “It’s a curious formula to say that you’ve never witnessed any antisemitism. You yourself apologised for signing a petition opposing a ban on a musician who blamed the Grenfell Tower disaster on so-called ‘Jerusalemites’. So far from not witnessing it, you accidentally – you apologised for it – went along with it.”

Williamson: “That’s very, very unfair. Look I didn’t know that the individual concerned had made those remarks and actually deleted the Tweet within 12 minutes of actually posting when it was brought to my attention.”

The unnamed “musician” is Gilad Atzmon who – despite being an antisemite who promotes conspiracy theories and Holocaust denial – used to be quite a regular fixture on the BBC. Williamson did indeed delete his Tweet promoting a petition defending Atzmon and made an apology based on what was described in the New Statesman as “a claim that for many stretches credulity”.

Robinson however did not bother to provide listeners with the details of that story or to ask Williamson how he ‘accidentally’ managed to sign a petition supporting an antisemite without bothering to do any background research. He went on:

Robinson: “What about when you defended a man who’d said Jewish Trump fanatics were to blame for antisemitism allegations in the Labour party? You defended that man. He was a member of the National Executive Committee.”

Williamson: “He…well…well you’re trying to pick out isolated examples here Nick to try to imply that there is a major problem.”

Robinson: “No, I’m asking you to justify the fact that you said you’ve never seen something when in your own personal case you have twice faced allegations of going along with antisemitism.”

Again Robinson did not provide listeners with the details of the example he used or even the name of “that man” – Peter Willsman – so that they could check out the story and judge Williamson’s responses for themselves.

Williamson: “Allegations are one thing – aren’t they? – but just because somebody makes an allegation doesn’t make it true. If you actually go down that road you’re then very much into the McCarthyite witch hunt era, aren’t you?”

Williamson: “Well let me quote you what a Jewish journalist…”

Robinson: “No, I’d like you to respond to Mr McDonnell.”

Williamson: “Well yeah I am gonna respond with this comment actually and it’s a comment from a Jewish journalist and I think if you’d just do me the courtesy of listening for a moment Nick, I think you’ll find it highly significant. He wrote on the 21st of July last year ‘Expect a group of high-profile right-wing MPs and councillors or members to resign from the Labour party in protest. Don’t fall for this. In reality this will be just another attempt to sabotage Labour, possibly setting up a new moderate splinter party in the process, using false claims of antisemitism as their totemic issue’.”

The anonymous journalist that Williamson claims is Jewish is Asa Winstanley – a known anti-Israel activist and a contributor to the extremist site ‘Electronic Intifada’ and the Hamas linked, London-based outfit MEMO. Significantly, Williamson omitted part of the Tweets he ‘quoted’. 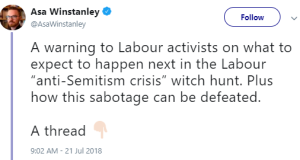 With listeners not told who that “Jewish journalist” is and not made aware of his long record of anti-Israel activity and his stance concerning antisemitism in the Labour party, they would of course be unable to judge Williamson’s response.

Robinson: “So do you agree the claims are false?”

Williamson: “Now that is a Jewish journalist and I would also refer you to…”

Robinson: “I was asking for your view Mr Williamson.”

Williamson: “I would also refer you to the letter that was signed by over two hundred prominent Jewish members of the party who say in an open letter that Labour under Jeremy Corbyn…”

Robinson: “Can you tell me your view. You’re only quoting other people’s views.”

Williamson: “Let me just answer in my own way…that Labour and Jeremy Corbyn are a crucial ally in the fight against racism, Islamophobia and antisemitism.”

That letter cited by Williamson naturally appeared in the Guardian and its signatories include numerous anti-Israel campaigners who conveniently deny the existence of antisemitism in his party. Again, without that essential background information, listeners would be unable to judge Williamson’s response for themselves.

The interview came to an end shortly after that with Robinson again citing Labour MPs:

Williamson: “Well I don’t…no…I’m not saying that. I mean I do think there was delays in the…err…dealing with the complaints that have been made but I think it’s important to put those into context as well. Labour is the biggest party in western Europe now and there were a number of complaints. Around a third of them however were deemed not to have sufficient evidence – potentially malicious complaints being made about antisemitism – and obviously the Labour party does need to deal with that and there was a bit of a delay but look, there is no place for antisemitism in the Labour party.”

Williamson’s framing of the topic under discussion in this item is based on the fallacy that if an anonymous “Jewish journalist” and unnamed “prominent Jewish members of the party” say so, then allegations of antisemitism can’t possibly be true.

With Nick Robinson having made no effort to unpack that sophism or to explain to listeners what sort of political milieu the little known fringe activists invoked by Williamson inhabit, this item clearly did the exact opposite of helping audiences to “engage fully” with the issue of antisemitism in the UK Labour party.