But BBC audiences are unlikely to discover that the information they were given is inaccurate.

Earlier in the week we noted that a BBC News website report published on March 8th inaccurately claimed that “the Israeli authorities in 2017 scrapped plans to create a mixed-gender prayer area at the wall”. 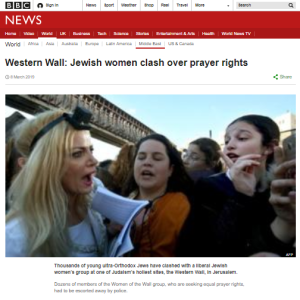 “…the average reader would obviously understand from that statement that no such “mixed-gender prayer area” exists at the Western Wall because the Israeli authorities “scrapped (i.e. discarded) plans” to create one two years ago. That, however, is not the case.”

“Thank you for getting in touch about our article reporting that thousands of young ultra-Orthodox Jews have clashed with a liberal Jewish women’s group at one of Judaism’s holiest sites, the Western Wall, in Jerusalem (https://www.bbc.co.uk/news/world-middle-east-47496456).

You raise a fair point and we’ve since amended the article’s text to make clear that these plans related to an existing mixed-gender area.

We’ve also added a correction note at the bottom of the article outlining this change.

We hope you will find this satisfactory and thank you once again for getting in touch.”

The article’s final paragraph has indeed been amended.

However the continued absence of a corrections page on the BBC News website means that readers who read that report when it was first published on March 8th are highly unlikely to have revisited it four days later when it no longer appeared on the website’s ‘Middle East’ page and hence remain unaware that the information they were given was inaccurate.