The March 25th evening edition of the BBC World Service radio programme ‘Newshour’ purported to inform listeners “Why tensions in the Gaza Strip are rising again”. 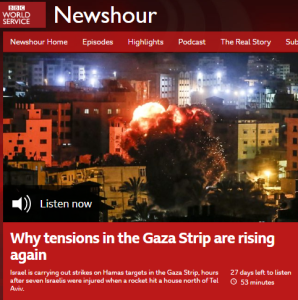 “Hours after a rocket hit a house near Tel Aviv and injured seven people, Israel is carrying out strikes on Hamas targets in the Gaza Strip. Could this be the start of a full-scale conflict?”

While able to inform audiences who was carrying out strikes in the Gaza Strip, the ‘Newshour’ team evidently chose not to clarify who had fired the rocket that brought about those strikes.

Presenter James Coomarasamy’s introduction at the start of the programme included the following:

Coomarasamy: “Tensions rise in the Middle East as President Trump recognises Israel’s claim to the Golan Heights and rockets are fired in both directions between Gaza and Israel.”

Not only do we see a specious suggestion of linkage between the US president’s signing of a proclamation and a rocket fired by terrorists hours earlier but Coomarasamy also promoted false equivalence with the inaccurate claim that rockets were being fired from Israel into the Gaza Strip.

Introducing the item itself (from 00:54), Coomarasamy added the topic of the upcoming election in Israel to his mix of ‘explanations’. [emphasis in italics in the original, emphasis in bold added]

Coomarasamy: “First though to the Middle East and with Israel’s general election just a couple of weeks away, are we seeing the start of a major conflict in the Gaza Strip? A rocket strike from that territory injured several people and destroyed a house today in a neighbourhood [sic] north of Tel Aviv – the furthest that a rocket fired from Gaza has reached since Israel’s last war with the group – the militant group – which controls the territory, Hamas, five years ago. Spokesperson for the Israeli Defence Forces Captain Libby Weiss said there was no doubt who was to blame.”

After listeners had heard a recording of Captain Weiss explaining that the rocket in question was produced and launched by Hamas, Coomarasamy went on:

Coomarasamy: “In the past few hours Israel has closed all [sic – actually two] crossings with the Gaza Strip including access to the sea and has launched a series of retaliatory airstrikes.”

The relevant announcement from COGAT actually referred to “a reduction of the fishing zone in Gaza” rather than closure of “access to the sea” as claimed by Coomarasamy, who then changed the subject.

Coomarasamy: “Prime Minister Benjamin Netanyahu has cut short his visit to Washington to oversee the operation but not before President Trump had officially broken with the international consensus and recognised Israel’s claim to the occupied Golan Heights. The Arab League has condemned this move as illegitimate. At the White House Mr Trump said the attack near Tel Aviv today showed how important it was for Israel to be able to defend itself.”

After listeners had heard a recording of the US president’s remarks, Coomarasamy went on to introduce the BBC Jerusalem bureau’s Tom Bateman (from 02:51) with “the latest”.

Bateman: “What’s happened tonight is that the Israeli military has carried out now numerous airstrikes in locations in the Gaza Strip. There have been powerful explosions seen and heard in Gaza City, in the centre of the Strip in Khan Younis, in the south. The Israeli military says that one of its targets has been a headquarters for Hamas, the militant group that runs Gaza, which housed, it says, its general security forces and general intelligence, also military intelligence: the place where it believes that military sites in Israel are gathered by Hamas’ intelligence forces. And it’s also now reported that the offices of Ismail Haniyeh – who is the political leader of Hamas – have been targeted in an Israeli airstrike as well.”

Did “the Israeli military” really say that it believes that those targeted Hamas headquarters are “the place” where the terror group’s military intelligence gathers information on “military sites in Israel”? Here is the relevant IDF Tweet in English, stating only that “Hamas collected intelligence for planning attacks against Israel” and with no mention of “military sites”. 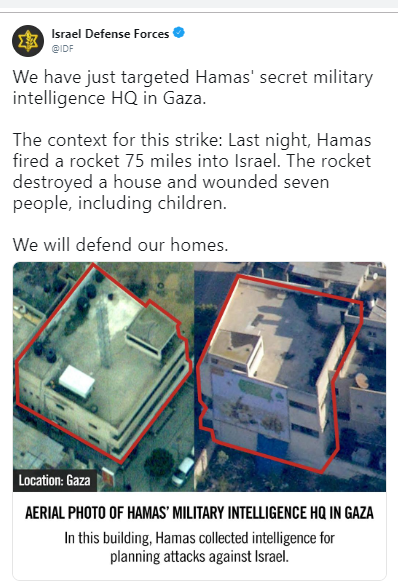 Here is the equivalent Tweet in Hebrew. It states that “Hamas’ military intelligence department is responsible for gathering and studying intelligence against the State of Israel”. 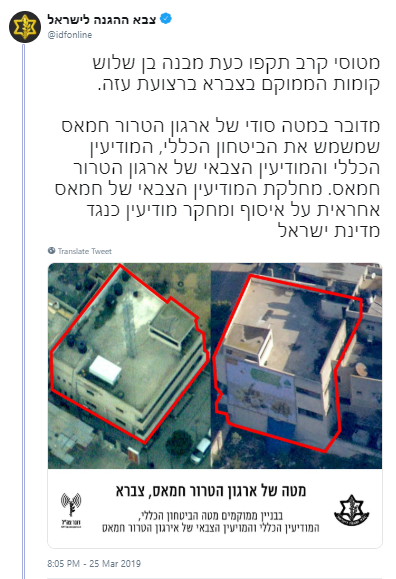 Again we see no evidence to support Bateman’s claim that the IDF said that Hamas’ military intelligence gathers information exclusively about “military sites in Israel”. Moreover, another IDF statement clarified that:

“In response to the attack, the IDF has begun striking Hamas buildings which were utilized to plan and carry out terrorist attacks against Israeli citizens. The IDF has struck Hamas’ previously secret military intelligence headquarters, its Internal Security Service offices, the office of Hamas Chairman Ismail Haniyeh, and a number of other military compounds.” [emphasis added]

That unsupported claim from Bateman is particularly pernicious given that not only does the BBC refuse to use the words terror and terrorist when describing Hamas, but Bateman has now implied that its targets are – as Hamas itself often claims – exclusively military rather than predominantly civilian.

No less significant is the fact that an hour before Bateman came on air, the IDF had already reported some 30 rocket attacks from the Gaza Strip against civilian communities in the border region (with a further 30 later on through the night). Bateman however elected to erase that deliberate targeting of civilians from view.

Bateman went on to describe the rocket attack on the house in Moshav Mishmeret early the same morning before once again bringing up the topic of the April 9th election in Israel.

Bateman: “This kind of strike, which hasn’t happened since the war between Hamas and Israel of 2014 and comes at a very sensitive time because there are Israeli elections due to take place in two weeks’ time. Some of prime minister Benjamin Netanyahu’s rivals have been saying that he hasn’t taken a forceful enough approach in the last year or so when it comes to Gaza and so there has been political pressure on him.”

Coomarasamy: “Meanwhile, he’s been getting political support from the US president.”

Bateman once again told listeners about the US president’s recognition of Israeli sovereignty over the Golan Heights and “criticism” from Syria “as well as other Arab and Muslim states” before Coomarasamy asked whether the US decision is “likely to have an impact on the election”.

With Bateman having replied that “it gives prime minister Netanyahu an electoral lift” and “it does help him to some degree”, the item closed.

With a very significant proportion of this item having focused on the Israeli election and the US proclamation concerning the Golan Heights, BBC World Service radio audiences could be forgiven for arriving at the conclusion that the answer to the programme’s question of “why tensions in the Gaza Strip are rising again” (rising tensions in southern Israel were obviously considered to be of less interest) lies in those two topics rather than in the deliberate targeting of Israeli civilians by terrorist organisations armed with military grade projectiles.