Though the idea of a ‘thaw’ in Arab antisemitism may sound good and seem attractive to editors as a good counter-intuitive regional analysis, it has little relation to reality.

Arab countries that expelled over 850,000 Jews in the decades following World War 2 now want Jews to return, according to an article in The Economist (Decades after the Jews went into exile, some Arabs want them back, April 4). 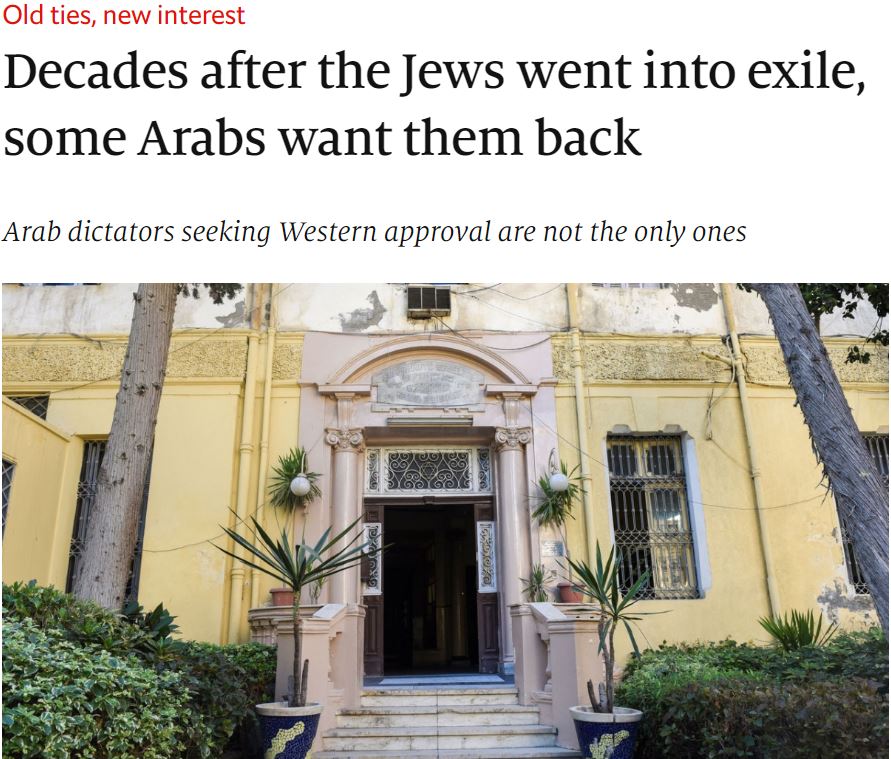 Examples of the Arab-Jewish Spring include a Facebook poll showing some support in Iraq for allowing (non-Israeli) Jews to immigrate, the opening of a new synagogue in Dubai, the Egyptian government’s restoration of a historic synagogue in Alexandria, and the claim by that country’s president that he’d build new synagogues if the Jews returned.

Of course, the big word in that vow is the word “if”.  It’s easy to be publicly philosemitic when you have no Jews and the prospect of the Jewish community returning is close to zero.  Though the article notes that critics view such gestures as publicity stunts by Arab dictators seeking Western approval, the concluding paragraph suggests the Economist journalist buys into the narrative.

Still, spikes in tension over Israel no longer spark anti-Jewish pogroms. Some Palestinian politicians still whip up anti-Jewish feeling, but many speak Hebrew and have greater awareness and understanding than before. A surprising number of researchers uncovering the Middle East’s Jewish past are Palestinian. Some even speak of a common fate with dispossessed Arab Jews. “We’re entering an age of post-colonialism,” says a Christian cleric from Cairo. “We’re again learning how to see richness in others, not threats.”

Of course, the lack of anti-Jewish pogroms may have something to do with the fact that there are very few Jews who still live in these countries!

Moreover, the article completely ignores endemic antisemitism in the region – hatred that’s not just whipped up by some politicians.

ADL surveys showed that the Middle-East and North Africa has the highest percentage of respondents (73%) who agreed with antisemitic statements such as, “Jews have too much control over global affairs”, “Jews are responsible for most of the world’s wars”, etc. (Palestinians lead the Arab pack with a staggering 93% holding such views.)  And, there is no sign that the popularity of such conspiratorial thinking has diminished in the region.  Indeed, research published by the University of Chicago in 2018 focusing on attitudes in Egypt in Saudi Arabia showed that 52% believe “Jews carried out the Sept. 11, 2001 attacks” with 68% endorsing some form of Holocaust denial – a figure that’s consistent, the authors noted, with ADL’s survey.  Additionally, all you have to do is visit the Arabic monitoring sites MEMRI and Palestinian Media Watch to get a sense of how antisemitism is embedded in the very fabric of daily life on the streets of Cairo, Damascus, Riyadh and Ramallah.

Rather than representing any real change in Arab attitudes, the overtures towards Jews by some leaders in the region noted by the Economist can more likely be explained by their desire to curry favour with Israel and the Americans to confront the threat posed by Iran, and likely the belief that a Jew-friendly public face is good for tourism.

Though the idea of a ‘thaw’ in Arab antisemitism may sound good and seem attractive to editors as a good counter-intuitive regional analysis, it has little relation to reality.

Like Loading...
Tags from the story
Antisemitism, Economist, Israel, The Economist
Written By
Adam Levick
More from Adam Levick
Ali Abunimah – contributor to ‘Comment is Free’ from 2006 to 2009,  co-founder of...
Read More