BBC promotes clip from 'Newsnight' with interviewee it acknowledges is 'seen as antisemitic'.

On the evening of May 17th the BBC Two programme ‘Newsnight’ posted a Tweet which included a 1:42 minute clip from an interview by host Kirsty Wark with Bobby Gillespie, a member of a pop group called ‘Primal Scream’. 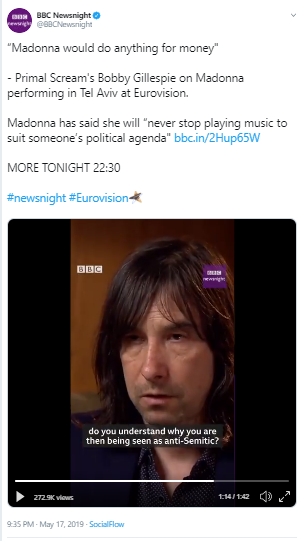 [emphasis in italics in the original]

Gillespie: “Well Madonna would do anything for money, you know, she’s a total prostitute. And I’ve got nothing against prostitutes but I think, you know, the whole thing is set up to just, you know, ehm…it’s set up to normalise the, you know, the State of Israel and the, you know, and its disgraceful treatment of the Palestinian people. And by going to perform in Israel, I think what you do is you normalise that. So, you know, Primal Scream would never perform in Israel and I think Madonna is just desperate for publicity, desperate for the money, because she’d be getting paid…they pay very, very well.”

Wark: “This suddenly gets into difficult territory because you believe in the State of Israel’s right to exist? Because this is what the big argument is…”

Gillespie: [interrupts] “No, I believe in the rights of the Palestinian people.”

Wark: “And the rights of the Israelis?”

Wark: “I have to ask this one question which is if you do not believe in the right of the State of Israel to exist, do you understand why you are then being seen as antisemitic?”

Gillespie: “I’m not antisemitic at all. All my heroes are Jews. Karl Marx, Bob Dylan, [laughs] the Marx Brothers [laughs].”

Given Gillespie’s long-standing record of anti-Israel actions and statements, Wark must have known in advance what sort of reaction she was going to get to the question concerning the Eurovision Song Contest which she bizarrely chose to pose during an interview ostensibly about the group’s new album.

But rather than having any qualms about giving a platform to a person ‘Newsnight’ obviously recognises as holding antisemitic (and misogynistic) views, the BBC elected to further promote those views on Twitter, in Radio 5 live news bulletins, on the ‘Newsnight’ YouTube channel and on the ‘Middle East’ and ‘Entertainment & Arts’ pages of the BBC News website as well as on BBC Two’s main news programme itself. 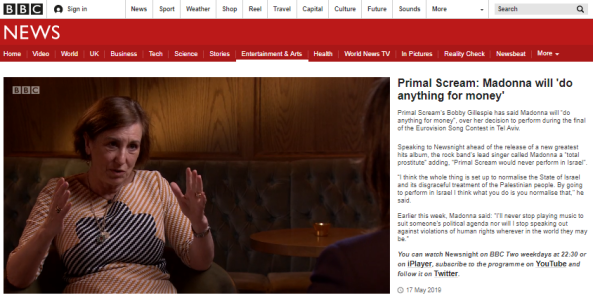 Apparently the BBC has convinced itself that the multi-platform amplification of antisemitic views meets its obligation to provide “duly accurate and impartial news, current affairs and factual programming”.