Once again the BBC fails to inform audiences what the BDS campaign is really about.

On May 17th the BBC News website published a report concerning the passing of a motion in the German parliament denouncing the Boycott, Divest and Sanctions campaign against Israel as antisemitic. 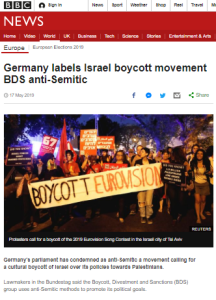 The BBC’s take on the story was titled “Germany labels Israel boycott movement BDS anti-Semitic” and was it was illustrated using a photograph captioned “Protesters call for a boycott of the 2019 Eurovision Song Contest in the Israeli city of Tel Aviv” rather than with an image of, say, the German parliament.

The article opened by materially misleading readers with regard to the BDS campaign’s aims and tactics. [emphasis added]

“Germany’s parliament has condemned as anti-Semitic a movement calling for a cultural boycott of Israel over its policies towards Palestinians.”

The BDS campaign does not call for a cultural boycott of Israel alone: it also promotes consumer and trade boycotts, sporting boycotts and academic boycotts. In addition it campaigns for ‘divestment’: the withdrawal of investments in Israel by banks, pension funds, and other large investors or from companies operating in Israel. The campaign also calls for sanctions: punitive actions by governments and international organisations, including trade penalties or bans, arms embargoes, and cutting off diplomatic relations.

With readers having been wrongly told that the BDS campaign is only about a cultural boycott, it is unclear how they were to be expected to understand the following statement found in the BBC’s report:

“”The ‘don’t buy’ stickers of the BDS movement on Israeli products [could be associated] with the Nazi call ‘don’t buy from Jews’, and other corresponding graffiti on facades and shop windows,” the non-binding resolution said.”

While 142 of the 329 words used in this report described the German parliament’s decision,  seventy-four words related to the topic of the Eurovision Song Contest, thereby reinforcing the inaccurate impression that the BDS campaign is all about ‘cultural boycott’.

“It comes after the group [the BDS campaign] called for artists to boycott the Eurovision Song Contest held in Tel Aviv this week.

Ahead of this year’s Eurovision Song Contest, the BDS movement called on artists and broadcasters to distance themselves from the event, which they said was being used to “distract attention from [Israel’s] war crimes”.

Madonna was among those facing calls to boycott the contest, but she confirmed on Thursday that she would be performing.”

At the bottom of the article readers found a link to one of the many recent BBC reports concerning the Eurovision Song Contest in which the BDS campaign has been given context-free amplification.

Readers also found 62 words (and a link) of unquestioning amplification of the BDS campaign’s response to the German decision.

“The BDS movement described the decision as “a betrayal of international law”. […]

Condemning the move, the BDS group said the “unconstitutional resolution” was anti-Palestinian and unhelpful in the fight against “real anti-Jewish racism”.

“BDS targets complicity not identity. The academic and cultural boycott of Israel is strictly institutional and does not target individual Israelis,” the movement said in a statement posted online.”

BBC audiences were also told that:

“Israel’s Prime Minister Benjamin Netanyahu, who has previously said that the BDS movement opposes his nation’s very existence, welcomed the “important” decision in a statement posted on Twitter.

“I hope that this decision will bring about concrete steps and I call upon other countries to adopt similar legislation,” the statement said.”

There is of course nothing new about the BBC framing the BDS campaign’s ‘one-state’ opposition to the existence of the only Jewish state in the world as a claim that is made solely by Israeli government officials.

The meaning of the BDS campaign’s stance concerning the ‘right of return’ of Palestinian refugees to Israel – described by campaign leader Omar Barghouti as the “most important” of its demands – has never been adequately clarified to BBC audiences and neither has the fact that the campaign is viewed as antisemitic because it singles out the Jewish state alone and because it negates the right of Jews to self-determination.

Instead of BBC audiences being provided with information which would help them understand the full background to this story, readers of this report were fed uncritical amplification of the cynical BDS campaign lie that it is concerned about “real anti-Jewish racism”.