The BBC once again provides a member of a terrorist organisation with a platform from which to disseminate misinformation and propaganda.

The BBC ‘frequent flyer’ who told audiences in July 2018 that Israel prevents the people in Gaza from “having fresh air” – Hamas spokesman Ghazi Hamad – was invited back for a ‘Hardtalk’ interview aired on BBC World Service radio and two BBC television stations on May 22nd. 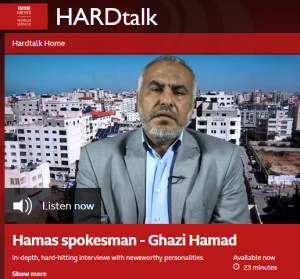 “Stephen Sackur interviews Ghazi Hamad, a spokesman for Hamas. The surge in Israeli-Palestinian violence in Gaza earlier this month was relatively short-lived, and the status-quo remains intact. But could change be afoot? Hamas’s internal grip on Gaza is threatened by rising economic discontent. The Trump Administration will soon unveil a peace plan built on economic incentives for the Palestinian people. The movement’s rhetoric is unbending, but do the Palestinian people long for new ideas?”

Following a similar introduction, presenter Stephen Sackur asked his guest: [emphasis in italics in the original, emphasis in bold added]

Sackur: “…when the people of Gaza ask you how you and the Hamas movement are going to make their lives better, what do you say?”

It is of course entirely predictable that an interview with a spokesman for a terrorist organisation would yield nothing more than a recitation of that group’s misinformation and propaganda. Hence one would expect an interviewer representing a Western media organisation obliged to provide its audiences with “duly accurate and impartial news, current affairs and factual programming” in order to “build people’s understanding” to robustly challenge all such propaganda.

However, it took Stephen Sackur a full four minutes to present any sort of challenge to the misinformation repeatedly touted by Hamad.

Hamad: “I think we are struggling, we are working day and night in order to ease the life of the people in Gaza. But I think the people they understand very well that the reason of this crisis is the occupation, is the policy of the siege, is the policy of the blockade, is the pressure on Gaza everyday because Israel look to Gaza as hostile region and they try to keep Gaza under siege and blockade, sanctions and striking every day. I think we are trying to stop this.”

Hamad went on to claim that Hamas was trying to “stop this” by means of reconciliation with Fatah and through a “ceasefire agreement”, concluding:

Hamad: “If we put end for the occupation in Gaza I think people could create freedom, dignity and respect and they can move everywhere, they can do everything that they want.”

Sackur: “Yeah. We understand that there are lots of things that you in Gaza are not able to deliver and you talk about what you call the Israeli blockade and you know that we on ‘Hardtalk’ talk to very senior figures in the Israeli government about their policies towards the Gaza Strip but I’m interested in what you can control…”

Hamad’s reply claiming that Hamas “is not so interested to keep control [of] Gaza” did not elicit a response from Sackur and audiences were not told that the Gaza Strip also has a border with Egypt.

Hamad: “It is a big challenge for us. It’s not easy because Gaza’s like prison. It’s closed from all sides. The gates of Gaza are controlled by the occupation. Gaza’s under sanctions, under the control of the occupation so it’s not easy to find a genius solution for this situation unless we put end for the occupation in Gaza.”

Sackur: “There’s no genius solution; I agree of course with that. But it does raise questions about the sense of your particular strategy. For example, you know, just a couple of weeks ago Hamas’ military wing – along with Islamic Jihad – took the decision to fire hundreds of rockets into Israel. Now I’m just wondering how you can convince anybody that that is in the long-term best interests of the people of Gaza, given that it just gives license to the Israeli government to yet again impose the sort of economic blockade, maintain the blockade that you’ve just talked about.”

Hamad had obviously not “talked about” an “economic blockade” (which in fact only restricts the entry of dual-use goods which can be used for the purpose of terrorism). Hamad had referred to a ‘siege’ and an ‘occupation’ which do not exist.

Hamad: “Look I think we are living in the big dilemma. We are under occupation and then we have to resist against this occupation because the occupation is the source of all evils and all kinds of troubles in Gaza here. And I think we are fighting the Israeli occupation in order to live in freedom and dignity. I think this is something we could not be blamed for this. I think this is the responsibility of the international community. They should as Israel you have to put an end for the occupation. You have to stop this.”

Only at 05:25 minutes into the conversation did Sackur present any form of challenge to that repeated use of the term ‘occupation’.

Sackur: “Hang on, let’s go through this in detail. You talk about ‘the occupation’. Of course Gaza is not occupied. Israeli forces pulled out of Gaza many years ago. You can talk, as you do, about the economic policies the Israelis implement towards you…”

Sackur: “No, I understand what you are saying but there is not…there is not an Israeli military troop occupation of Gaza. There used to be. The Israelis pulled out…”

Of course the main issue hindering audience understanding of this interview is that – as an experienced journalist such as Sackur surely knows – Hamas uses the term ‘the occupation’ as a synonym for Israel, reflecting the fact that it rejects the existence of the Jewish state. Sackur later passed up another opportunity to enhance audience understanding by challenging Hamad on that subject.

06:30 Hamad: “Look, Stephen, you have to understand: we are a peaceful people. We want to live like any people in the world. We want to live in freedom. It is enough for us to live in the seventy years of occupation and dilemma and troubles every day…”

Neither did Sackur challenge Hamad’s subsequent claim that there is “no armed struggle in the West Bank” or his bizarre allegation that Israel “abuse” Mahmoud Abbas and “now dismantle the Palestinian Authority”. Moreover, Sackur had nothing to say about this diatribe:

Later on in the interview (from 12:47) Sackur brought up the topic of “a very careful coordination by Hamas security forces of this ‘March of Return’”.  He however failed to challenge Hamad’s repeated portrayal of the ‘Great Return March’ as “peaceful” or the following falsehoods:

Notwithstanding Stephen Sackur’s few symbolic and tepid challenges, this interview failed to provide BBC audiences with accurate and impartial information which would contribute to their understanding of a complex issue. It did however once again provide a member of a terrorist organisation with a platform from which to disseminate misinformation and propaganda.