Over the past couple of days we have discussed two items aired on BBC Radio 1 and BBC Radio 1 XTRA on May 13th and May 14th – ostensibly as part of ‘Newsbeat’ coverage of the Eurovision Song Contest in Tel Aviv.

On May 15th another item produced by that department of BBC News was aired on the same two radio stations. 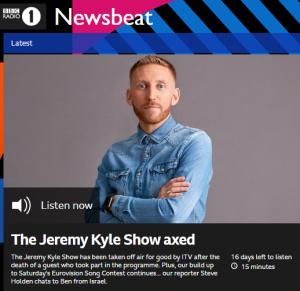 “…our build up to Saturday’s Eurovision Song Contest continues… our reporter Steve Holden chats to Ben from Israel.”

Once again Steve Holden produced a report (from 03:50 here) which for the most part had little to do with the song contest itself. [emphasis in italics in the original, emphasis in bold added]

Holden: “Hello from the busy beach front here in Tel Aviv. We are here for Eurovision. It’s the most-watched live music event in the world. It was the first semi-final last night and then the grand final takes place on Saturday.

Now Tel Aviv is a city that is full of skyscrapers. It’s modern, flashy. It’s liberal too – very stylish as well – the complete opposite of where ‘Newsbeat’ was yesterday: the Palestinian territory of Gaza. That is the strip of land just 90 minutes away from here: an incredibly poor place home to 2 million people.”

Listeners then heard from one of the people interviewed in the May 14th ‘Gaza special’.

“If someone give me the chance to go outside, I will not [come] back to Gaza. It’s not a normal life. It’s not human.”

Holden: “As we’ve been hearing this week, the relationship between the Israeli government and Palestinians in Gaza is a tense one – often violent – with each side directing anger at the other.”

The military grade rockets (rather than “anger”) launched by Palestinian terror factions in the Gaza Strip are of course not aimed at “the Israeli government” but at Israeli civilians. The strikes conducted by Israel are not “anger” either but a response to serious terror attacks perpetrated by terrorist organisations.

Holden: “And it’s that tension that has caused some people to question Eurovision taking place here in Israel.”

No: it is the desire to ostracise, defame and delegitimise Israel that is really behind those calls for boycott.

Holden: “So this is someone that you would definitely not associate with the Eurovision Song Contest.”

Listeners then heard from a BDS supporting member of a pop group featured in an article by “Newsbeat” which was published on the BBC News website on the same day.

Oddie: “I mean this is the most controversial Eurovision Song Contest that, you know, ever happened.”

Holden then went on to promote an event organised by the anti-Israel, Hamas supporting Palestine Solidarity Campaign.

Holden: “It’s Joff from Wolf Alice. His band are playing a DJ set this weekend at an event in the UK called ‘Not the Eurovision’. He supports a Palestinian-led movement called BDS which calls on artists to avoid performing in Israel. BDS disagrees with Israeli policies towards Palestinians and the way they’re treated. It’s something we’ve talked about on ‘Newsbeat’ earlier this week.”

Oddie: “The boycott movement is directed at the Israeli government – not the naffness of the Eurovision Song Contest: we’re all too happy for that.”

As was noted here when – on May 17th – BBC News similarly claimed that the BDS campaign calls solely for a ‘cultural’ boycott of Israel:

“The BDS campaign does not call for a cultural boycott of Israel alone: it also promotes consumer and trade boycotts, sporting boycotts and academic boycotts. In addition it campaigns for ‘divestment’: the withdrawal of investments in Israel by banks, pension funds, and other large investors or from companies operating in Israel. The campaign also calls for sanctions: punitive actions by governments and international organisations, including trade penalties or bans, arms embargoes, and cutting off diplomatic relations.”

Holden’s claim that the BDS campaign is “Palestinian-led” is also inaccurate.

Holden: “Previously Lana Del Rey and Lorde have both cancelled performances in Israel after pressure from campaigners. However, Israeli authorities say BDS is anti-Jewish.”

No: Israel says that the BDS campaign is antisemtitic (as do the German parliament, the British Foreign Secretary and the French president) because it singles out the world’s only Jewish state and because its insistence on the so-called ‘right of return’ for millions of descendants of Palestinian refugees would lead to the elimination of that state and thereby deny the Jewish people their right to self-determination.

Holden: “The people who put on Eurovision say the contest is not and should not be political. But some of this year’s entries are aware of the controversy.”

Listeners then heard parts of an interview Holden conducted days before with the Icelandic entrants.

“We feel conflicted of course. Our stance is a contradictory one. But obviously we feel that a contest like Eurovision which is founded in the spirit of peace and unity, we find it absurd to host it in a country that’s marred by conflict and disunity.”

Holden: “Hatari have agreed to stick to the rules though which say you can’t make any political statement during your performance.”

Apparently by way of ‘balance’ listeners then heard comments from the Greek entrant and from an Israeli singer.

Readers may recall that the day before this item went on air, ‘Newsbeat’ had purported to provide audiences with a ‘backgrounder’ on the (unsuccessful) calls to boycott the Eurovision Song Contest in Tel Aviv.

It is all too obvious that the two ‘Newsbeat’ reporters sent to Israel to cover the 2019 Eurovision (and their production teams) exploited a significant amount of their coverage of that popular event for the context-free amplification of calls to boycott it and for promotion of politically motivated narratives concerning the Arab-Israeli conflict.

That would be bad enough in any case but the fact that their content is specifically aimed at 16 to 24 year-olds in the UK and parts of it were presented as ‘history’ makes their inaccurate, partial and overtly political ‘journalism’ even more egregious.

BBC News claims BDS is solely about ‘a cultural boycott’