The BBC claims it could not vet a debate participant's offensive Tweets.

The evening of June 18th saw a televised debate titled ‘Our Next Prime Minister’ on BBC One.

“Emily Maitlis presents a debate between the candidates vying to succeed Theresa May as leader of the Conservative Party.”

Among the members of the public selected to present questions to the five candidates was a man presented as “Abdullah Patel, Imam of a mosque” (which was identified by different BBC departments as being in both Gloucester and Bristol) who brought up the topic of Islamophobia.

Writing at the Spectator, journalist Stephen Daisley continues the story:

“Shortly after the programme concluded, someone tweeting under the name Abdullah Patel (@AbdullahPatel94) claimed on Twitter to be the imam from the programme. His Twitter bio describes him as an ‘imam, primary deputy head, teacher, youth worker [and] trainee counsellor’ with a degree in psychology and counselling. He offered a critique of each candidate’s answer to the question posed on-air […]

The BBC News website embedded his Twitter thread in a follow-up article, meaning the Corporation either knows @AbdullahPatel94 to be the same man featured in the debate or its journalists assumed this to be the case and republished his comments without checking.

It’s important to establish these facts because, if @AbdullahPatel94 is, as he claims and the BBC seems to believe, the Abdullah Patel from the debate, the Corporation has some serious questions to answer about how extensively it vetted him. Guido Fawkes tweeted, before heading to bed, that those interested should have a gander at @AbdullahPatel94’s tweets about Jews. I did and what I found wasn’t pretty. Many of the tweets have now been deleted, so what follows is the screen grab. It was there for anyone to read.”

As well as the offensive Tweets highlighted by Stephen Daisley (including some suggesting an equivalence between Auschwitz and the Gaza Strip), additional information not limited to social media appears in an article by David Toube at the Quilliam Journal.

“…if @AbdullahPatel94 is who he claims to be, there could scarcely be a less suitable person to question anyone about prejudice. If the man who interrogated the Tory leadership candidates is the author of these tweets, the BBC has catastrophically failed in its editorial duties by giving him air time. The Corporation will have to account for this grave lapse in broadcasting standards and work to rebuild trust with viewers as well as the Conservative party. They have let both down badly.”

The BBC put out a statement:

However the Guido Fawkes website pointed out that a search showed that the BBC’s interviewee had been active on Twitter as recently as two days before the debate.

The BBC is claiming that an apparently very last-minute check did not turn up anything to preclude Mr Patel from taking part in the programme and one of the Tweets the BBC says it did not see was this one: 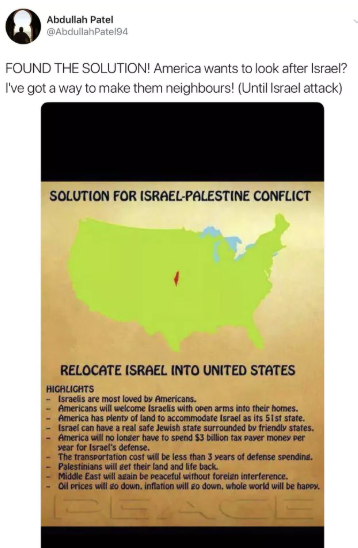 Readers may recall that in April 2016 the BBC was incapable of recognising that same image as antisemitic when it was found to have been promoted by a Labour MP and only described it as such after Naz Shah herself defined it in that term.

The question that therefore arises is even if the BBC had seen Mr Patel’s Tweets before the BBC One debate, would it have been capable of recognising their offensive nature? The BBC’s past record and the fact that the corporation does not work according to the accepted definition of antisemitism unfortunately makes that debatable.