A Labour MP's controversial meeting was not considered newsworthy.

Since the BBC One ‘Panorama’ documentary about antisemitism in the UK Labour party was aired last week the BBC has produced a considerable amount of multi-platform follow-up content on that topic.

One recent story which the BBC has however not covered is the reaction to a Labour MP’s meeting with a member of the Jordanian parliament.

“A senior member of the UK Labour Party met last week in London with a Jordanian lawmaker who has voiced support for terror attacks against Israelis and called for tearing up the peace deal between his country and Israel.

Yahya al-Saud, a member of Jordan’s House of Representatives, posted a picture to his Facebook account Thursday of himself with Labour MP Fabian Hamilton outside the Houses of Parliament. […]

According to al-Saud, he and other members of the Jordanian parliament’s Palestine Committee met with Hamilton at the House of Commons, where they discussed stopping Israel’s “racist” practices toward the Palestinians, as well other aspects of the Israeli-Palestinian conflict. […]

The Jordanian MP has on a number of occasions backed violence against Israel, including suicide bombings, and said the 1994 Israeli-Jordanian peace agreement “has brought nothing but disasters to the Jordanian people.”

He has also called to “liberate our holy places from the plundering Jews” and said he is “a slave to whoever takes me to Palestine as a fighter,” according to the Middle East Media Research Institute watchdog.”

Following criticism, including from some of his constituents, Mr Hamilton later claimed that ‘he was not aware of Yahya al-Saud’s “appalling and Anti-Semitic remarks” when he met him and other Jordanian lawmakers in London’. One trusts that the same goes for the Jordanian MP’s misogyny and history of brawling.

However a no less interesting part of this story concerns the background to that meeting. One of the photographs posted by al Saud shows him (second from the left) meeting the British MP (third from the left). 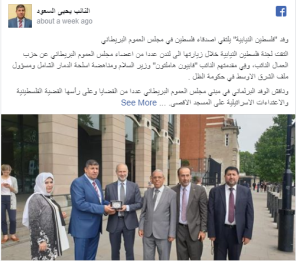 Second from the right in that photo is Zaher Birawi and the explanation for that is found in the Jordanian media. [emphasis added]

“MP Yahya Saud, who leads a parliamentary delegation to London, on Tuesday said that Jordan is paying the price of defending the Palestinian cause and safeguarding the Islamic and Christian holy sites in Jerusalem.

The delegation met with Palestinian and Arab community leaders and representatives of media institutions, with the presence of Jordanian Deputy Ambassador to the UK Daifallah Fayez, the Jordan News Agency, Petra, reported.

During the meeting, which was organised by the European Communication Forum and the Palestinian British Forum, Saud said that Jordanians stand behind their Hashemite leadership in rejection of the so-called “deal of the century”, adding that they sternly reject turning Jordan into an “alternative homeland” for Palestinians.”

“MP Yahya al-Sa’ud told the meeting that all Jordanians stand united behind His Majesty King Abdullah II in his rejection of the so-called “deal of the century” and any proposals to make Jordan a substitute homeland for the Palestinians.

The meeting figured high on the Hashemite custodianship over Muslim and Christian shrines in occupied Jerusalem. The meeting was organized by the Europal Forum in cooperation with the Palestinian-British Forum.”

While we do not know whether or not the Jordanian delegation similarly brought up the topic of “the Hashemite custodianship over Muslim and Christian shrines” in Jerusalem with the MPs and member of the House of Lords that they also met in London, it does seem highly likely.

Had the BBC reported this story it could have performed a useful public service by informing MPs and the public alike that, although Jordan has been trying for some time to promote the notion that it holds custodianship of Christian sites in Jerusalem, as recently documented by our colleagues at CAMERA Arabic that is not the case.

Another service the UK’s public broadcaster could have provided by investigating this story would be to apprise British politicians such as Mr Hamilton of the background to the groups which apparently set up his meeting with the Jordanian MP about whom he now says he was under informed.

The link between the ‘Palestinian Forum in Britain’ – described as “one of the components of the Hamas support network in the UK” – and ‘the EuroPal Forum’ is Zaher Birawi. As previously noted on these pages in connection to his role in the organisation of the ‘Great Return March’:

“…in addition to playing a role in convoys and flotillas,  Zaher Birawi was also involved in the organisation of the 2012 ‘Global March to Jerusalem’ and was previously director of the UK-based Palestinian Return Centre (PRC) – an organisation banned in Israel due to its Hamas affiliations.

More recently Birawi has been active in the role of chairman of the London-based EuroPal Forum – an organisation which appears to have replaced the Council for European Palestinian Relations (also banned by Israel) which became defunct after its director – Arafat Shoukri , who was also involved with the Palestinian Return Center – left the UK for Qatar (and a job with Al Jazeera) around 2014.”

The UK Labour party’s connections to Hamas-linked organisations such as the ‘Palestinian Forum in Britain’ and the ‘Palestinian Return Centre’ (with which Fabian Hamilton met in December 2017) caused some British commentators to ask “when is Labour going to take action in relation to its own extremism problem?” long before Jeremy Corbyn was elected as party leader.

Some in-depth reporting on that meeting on Parliament premises between British politicians and the Jordanian delegation could have contributed significantly to the understanding of the BBC’s funding public as to how the Labour party’s antisemitism crisis was – and continues to be – incubated as well as how foreign interest groups with links to a terrorist organisation have access to their lawmakers.